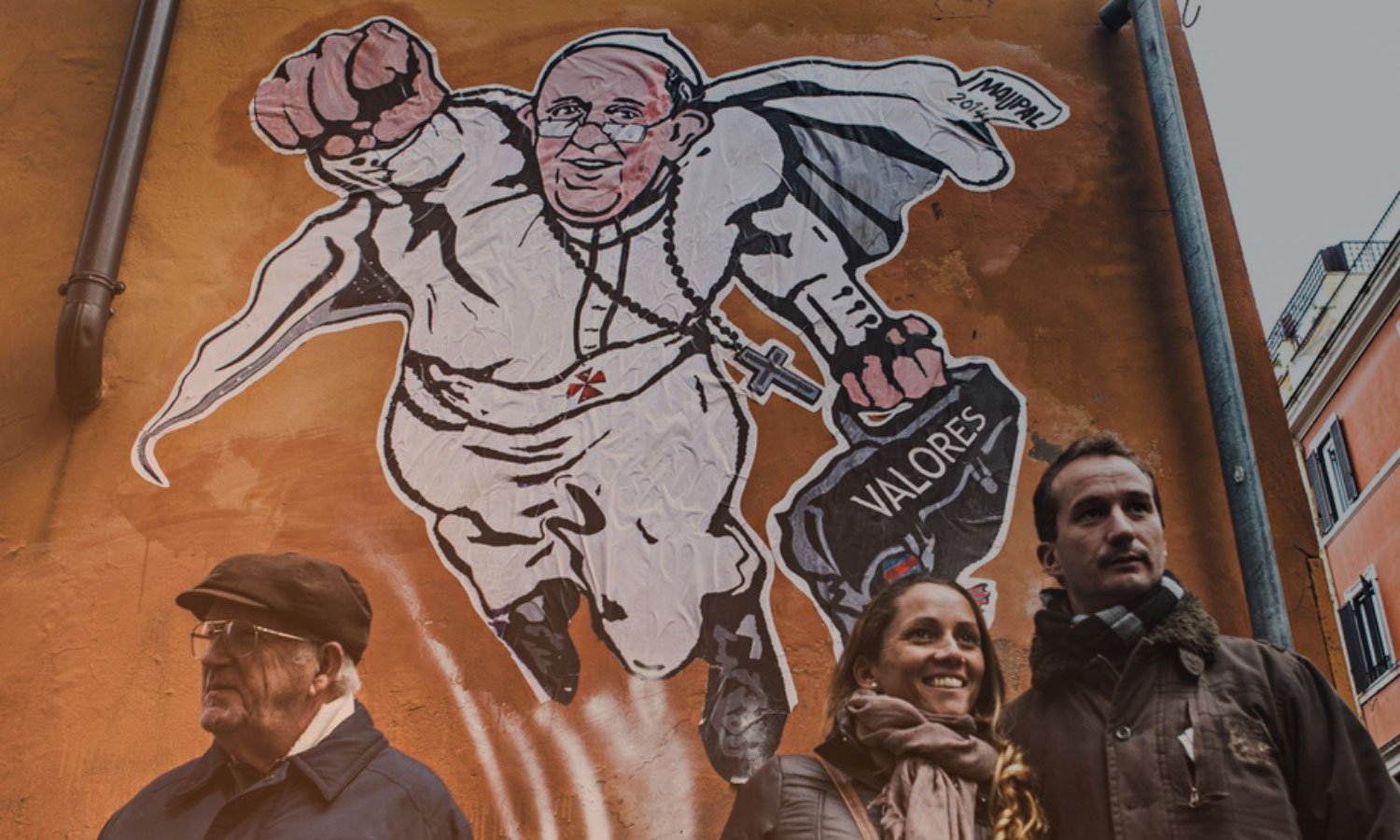 Our Pope has the unique talent of stirring the pot on a weekly basis. We here at the Crossroads Pursuit think that’s really awesome. The Church, contrary to popular belief, encourages discourse. Because we are Catholic, we ought to be thinking, arguing, wrestling in pursuit of truth more than the common man. That’s why we’ve decided to host this discussion of Laudato Si and the Market Economy and keep that pot stirring and stirring until we’ve churned this milky topic to butter. We’ve asked two contributors to write on this topic. Paul Kolker, the Catholic improv comedian will write from a free market perspective, and Josh Clemmons, the G.K Chesterton aficionado, will write favoring greater market restraint. After these blogs have been posted, they will have a chance to read each other’s arguments and return with a one page response. Those responses will be posted as a single blog next Wednesday. Without further adieu, here’s Paul:

THE MARKET: THE LOVE OF NEIGHBOR, LOVE OF SELF

Me: “Hi, my name is Paul, and I’ve been an entrepreneur for a couple of years now.”

Moderator: “When did you first feel the urge to mercilessly exploit your fellow man?”

Me: “Well, when I was really little I used to set fire to small woodland creatures with matches I bought with my allowance.  I guess the association between evil and money was indelibly imprinted on my mind back then.”

This caricature is of course way off base. Entrepreneurs would never gather in the basement of a church to help each other become free of their unrelenting lust to take advantage of people…or at least, not without charging admission.

Seriously though, this seems to be the only viewpoint people have when it comes to business owners these days. Business people are a pack of rabid dogs all hoping to sink their teeth into the naive little Bo Peep that is the modern consumer. It is unfortunate in its own right to see so many people accepting such a cartoonish view of things, but to hear members (nay, Vicars) of the Church stating similar ideas can be downright disheartening, especially since I’ve seen firsthand the great good entrepreneurial activity can accomplish (as I will explain in a moment).

In Laudato Si, Pope Francis wrote to the world the following:
“We need to reject a magical conception of the market, which would suggest that problems can be solved simply by an increase in the profits of companies or individuals. Is it realistic to hope that those who are obsessed with maximizing profits will stop to reflect on the environmental damage which they will leave behind for future generations?” He seems to be implying that an unfettered market produces a lust for profits in individuals and corporations.He has further criticized the markets as the cause for poverty around the world. He told ambassadors to Rome that economic inequality is caused by “ideologies which uphold the absolute autonomy of markets and financial speculation, and thus deny the right of control to states, which are themselves charged with providing for the common good.” While it is true that Francis’ predecessors were skeptical of the market in some ways, the language of Pope Francis’  commentary on economic and political issues has far more critical than any Pope in history. He calls for far more government intervention in the market, a further centralization of state power, even going so far as to call for a world government to regulate the environment. Yes, Sauron, we know you’re very excited about that

With the recent supreme court ruling on marriage that made gay marriage legal in all 50 states and now threatens the church’s non profit status, it seems that running headlong to the paternal arms the State might not be the best move for the Church, but I digress.

The Church has wrestled with its own conception of politics and the market for centuries. The Church’s social teaching is not fixed as its doctrine of the trinity is. It’s stance on religious freedom, for instance, changed dramatically in the last century, as did its prohibition of charging interest during the middle ages.This post is intended to be part of that “wrestling,” the Church continues to undergo. To be clear, then, I do not argue against the Church’s social teaching of a preferential option for the poor or for the need to protect creation.The heart of the Church should always seek to protect the poor and lift them up out of poverty. It should also always encourage us to be good stewards of God’s creation. What I am saying, is this: The free market contains within itself checks and balances against predation that are more effective than state parameters. It’s claims, therefore, should be at the very least understood by Catholics, if not wholly adopted.

So what’s going on with these entrepreneurs here? If you’ll allow me, I’d like to start with the following personal example. About a year ago I rented out my Toyota Camry on RelayRides.com (like Uber, but for car rentals). The idea hit me when I realized that I would be heading out of town for two weeks and that my car would just be sitting idle in the drive.  “Why not put this car to work for me?” I thought.  “Because then I can still pollute the atmosphere even while I’m hiking in the mountains.”

No, in all honesty, I thought it would be great to make some money just for being on vacation.  So I listed my car at $22 a day (…$22!), and when you do the math that comes out to a total of MORE than $22 for the two weeks.  So essentially I got paid to be on vacation.  Pretty great, huh?

“Wait a minute, Paul,” you interrupt, defying the normal conventions of a blog post.  “Isn’t that the same greed you were talking about earlier?  You just wanted to make a buck without really working for it. What about all those other decent cars that work the streets day in and day out?”

Aside from reminding you that no one should be “working the streets,” I would simply remind you that there are two sides to this equation.  So far, we have only looked at one side.  The other side of the equation comes in the form of the IT (pronounced “I-T”) guy whose job had moved him to Texas for only a month but who also didn’t want to shell out $50 a day (which if you’re keeping track is more than $22) to Hertz just to be able to get around the D-F-dub (Dallas / Fort Worth).  So I made money, and he saved money. And in the process I got to serve another human being, picking him up at the airport, helping him with his luggage, and doing it all with a smile.

“Well, you were just doing it for the money,” you again somehow interject.

Sure, money was a factor, but money is just a means of exchanging value without having to barter.  I mean, I wouldn’t expect him to compensate me for the use of a car by offering me a goat or a cow (plus, I hear it’s really difficult to fit livestock into the overhead bin). He simply offered me some money via a company that made this business exchange possible in the first place.

That’s right.  You read that correctly. The market motivated complete strangers to work together in a way that benefited everyone. I know, I know: pure evil.  I don’t know how I live with myself.

At the end of the day, however, that is how the majority of business relationships function. Two or three people work in a way that adds value to everyone.  That sounds an awful lot like loving your neighbor as yourself.  I love myself enough to expect some compensation for the value I offer, but I love my neighbor enough to offer that value in the first place, taking on the risks and responsibilities of maintaining a safely working vehicle that attracts renters in the process. The renter does not deal with any of that concern, but I do, because I know that by adding value to the lives of others I can receive value in return.

This does not deny the need to give even more radically through pure gifts of our time, talent, and treasure.  But the interesting thing is that adding value in this way has freed up more of my money and time for exactly that purpose.  Yes, some entrepreneurs do actually work so as to have more to give. “But that’s just you,” you may be thinking, “maybe you’re the exception, but most business owners are willing to do whatever it takes to make a profit. What about them?” Well first of all, they probably all of have great lobbyists. But I grant you that they do exist. that being said, however, hurling such accusations at a collective group of people is, at a logical level, no different than making assumptions based on race or religion. How do you know what most business owners are like? We can assume all we want about the interior motives of a business person, but the fact of the matter is that business in a free market incentivizes us to work together for the common good. If a businessman provides poor service or rips the customer off, he and/or she (you never know these days) will lose customers. If he treats his employees terribly, he will lose employees and they will not be productive. That’s right, accountability is built into the market.

Taking this a step further, to maximize profits, one must maximize the number of people served. That means that all of the legitimately wealthy people have simply served more people, which means that profit is just a measure of service.   And you better be paying attention because I said that in italics so I’m 100% right.
So when we stop to look at how the market works, there’s nothing magical about it. Free market exchange helps everyone because God has called us to love others as we love ourselves. The market system necessarily embodies this commandment because in a competitive system people are not going to settle for being mistreated.  If they don’t like their interactions with one company, they will offer their business to someone who treats them the way they deserve to be treated and not like those woodland creatures from back when I was a kid.

Paul once studied to be a celibate Roman Catholic Priest, but decided teaching math was a far preferable career. Paul decided to teach by day and perform by night, trying out his newest material on his captive audience of math students, many of whom have described his sense of humor as “adequate” or even “tolerable.”  Passionate about humor, his Catholic faith, young people, and above all, the truth, find out more about Paul’s speaking/comedy ministry: Here