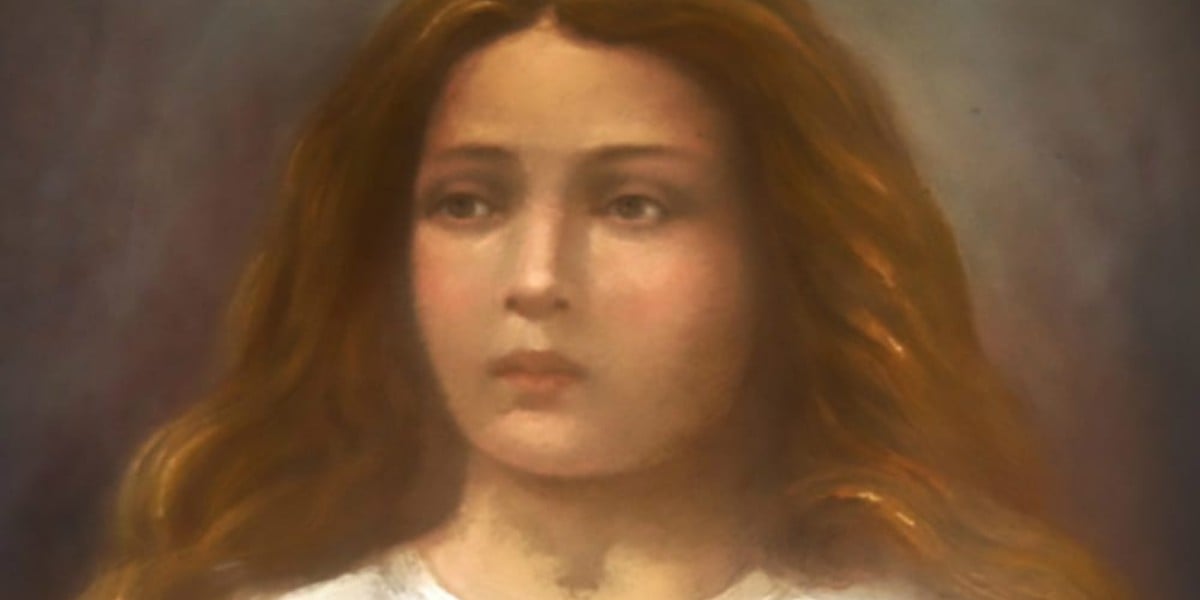 In his homily at the canonization of St. Maria Goretti, a paragon of chastity and purity, Pope Pius XII notes how the example of her life and death is a call to all Christians to a persistent, even relentless pursuit of virtue and perfection.

Saint Maria Goretti was born in 1891 into a poor Italian family to begin with. But when her dad died nine years later, things grew much worse. The family was able to survive only by working for a man named Giovanni Serenelli and his son Alessandro. Maria was pious and prayerful, reciting the rosary daily for the repose of her father’s soul. But in 1902, 20-year-old Alessandro Serenelli began making advances upon 11-year-old Maria. She refused, telling him that it would be a sin. Angry, Alessandro stabbed her.

Maria preferred to die rather than be raped. She survived for 20 hours in the hospital, undergoing surgery without anesthesia. Asked if she forgave her murderer, she replied, “Yes, for the love of Jesus I forgive him…and I want him to be with me in Paradise.”  Maria Goretti died on July 6, 1902, a martyr for chastity.  (bio by Dr. Italy)

It is well known how this young girl had to face a bitter struggle with no way to defend herself. Without warning a vicious stranger burst upon her, bent on raping her and destroying her childlike purity.

In that moment of crisis she could have spoken to her Redeemer in the words of that classic, The Imitation of Christ: “Though tested and plagued by a host of misfortunes, I have no fear so long as your grace is with me. It is my strength, stronger than any adversary; it helps me and gives me guidance.” With splendid courage she surrendered herself to God and his grace and so gave her life to protect her virginity.

The Call to Moral Perfection

The life of this simple girl – I shall concern myself only with highlights–we can see as worthy of heaven. Even today people can look upon it with admiration and respect. Parents can learn from her story how to raise their God-given children in virtue, courage and holiness; they can learn to train them in the Catholic faith so that, when put to the test, God’s grace will support them and they will come through undefeated, unscathed and untarnished.

From Maria’s story carefree children and young people with their zest for life can learn not to be led astray by attractive pleasures which are not only ephemeral and empty but also sinful. Instead they can fix their sights on achieving Christian moral perfection, however difficult and hazardous that course may prove. With determination and God’s help all of us can attain that goal by persistent effort and prayer.

Not all of us are expected to die a martyr’s death, but we are all called to the pursuit of Christian virtue. This demands strength of character though it may not match that of this innocent girl. Still, a constant, persistent and relentless effort is asked of us right up to the moment of our death. This may be conceived as a slow steady martyrdom which Christ urged upon us when he said: The kingdom of heaven is set upon and laid waste by violent forces.

So let us all, with God’s grace, strive to reach the goal that the example of the virgin martyr, Saint Maria Goretti, sets before us. Through her prayers to the Redeemer may all of us, each in his own way, joyfully try to follow the inspiring example of Maria Goretti who now enjoys eternal happiness in heaven.

If you would like to read more about Catholic Saints Online, click here to go to The Crossroads Initiative Saints Library.

Pope Pius XII governed the Church in the turbulent times of World War II and its aftermath. He was a played a very important role in the development of Catholic Doctrine through is ordinary teaching in a variety of encyclicals and apostolic letters, and in his extraordinary teaching–the dogmatic definition of the Assumption of Our Lady into heaven. Born Eugenio Pacelli, the future Pope Pius XII was ordained priest in 1899 and entered Papal diplomatic service in 1901. He was given increasing responsibilities over the years including Nuncio to Bavaria and the German Republic and ultimately, in 1930, Papal Secretary of State. He was elected Pope in 1939 on the eve of World War II and had the difficult task of guiding the Catholic Church through that bloody conflict and through the post-war restoration as well. Pius XII made important contributions to Catholic doctrine, defining the Assumption of the Blessed Virgin Mary as a dogma of faith in 1950. His death in 1958 led to the election of Pope John XXIII. The Second Vatican Council, convened by Pius XII’s successor, could not have occurred had it not been for the important groundwork laid by Pope Pius XII in his encouragement of Catholic Biblical studies, liturgical renewal, and the revival of the awareness of the Church as the Mystical Body of Christ. Biography by Dr. Italy