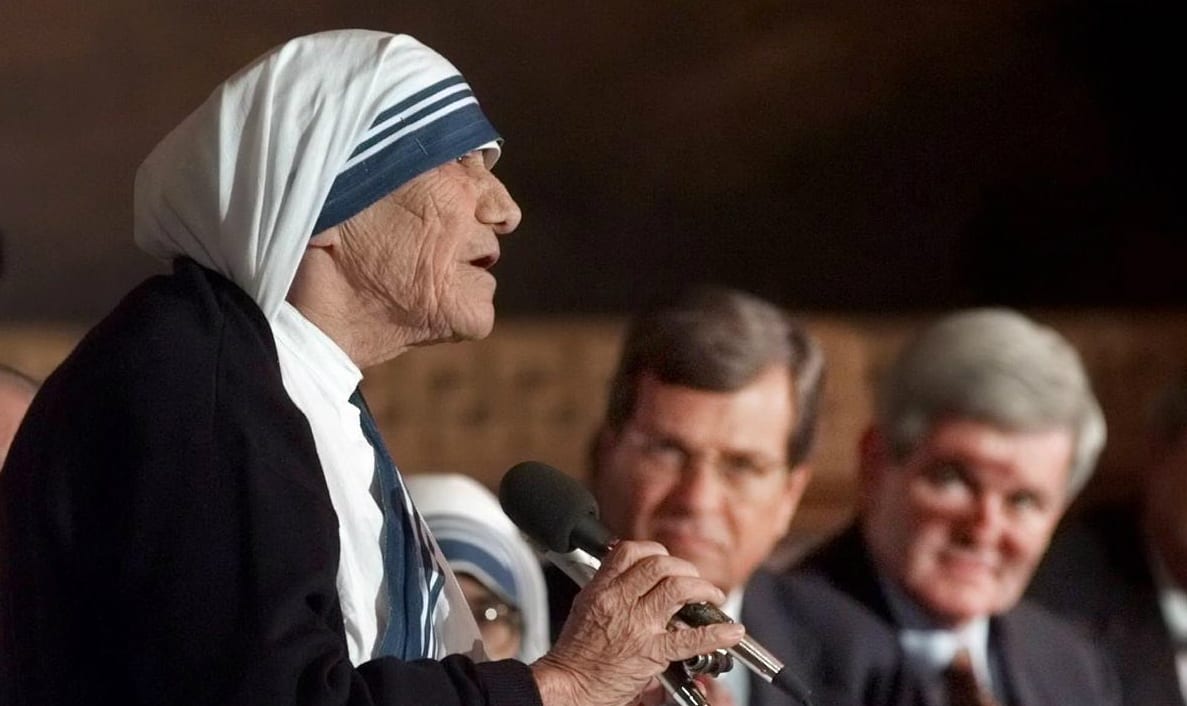 Mother Teresa’s Letter to the US Supreme Court on Abortion and Roe v. Wade

This amicus brief was filed before the U.S. Supreme Court in the cases of Loce v. New Jersey and Krail et al. v. New Jersey in February 1994, by Mother Teresa.  The letter address the 1973 Court decision on Roe v. Wade establishing a legal right to abortion.

I hope you will count it no presumption that I seek your leave to address you on behalf of the unborn child. Like that child I can be considered an outsider. I am not an American citizen.

My parents were Albanian. I was born before the First World War in a part of what was not yet, and is no longer, Yugoslavia.  In many senses I know what it is like to be without a country.  I also know what is like to feel an adopted citizen of other lands. When I was still a young girl I traveled to India.
I found my work among the poor and the sick of that nation, and I have lived there ever since.

Since 1950 I have worked with my many sisters from around the world as one of the Missionaries of Charity. Our congregation now has over four hundred foundations in more that one hundred countries, including the United States of America.  We have almost five thousand sisters.

We care for those who are often treated as outsiders in their own communities by their own neighbors—the starving, the crippled, the impoverished, and the diseased, from the old woman with a brain tumor in Calcutta to the young man with AIDS in New York City.  A special focus of our care are mothers and their children.

This includes mothers who feel pressured to sacrifice their unborn children by want, neglect, despair, and philosophies and government policies that promote the dehumanization of inconvenient human life. And it includes the children themselves, innocent and utterly defenseless, who are at the mercy of those who would deny their humanity.

So, in a sense, my sisters and those we serve are all outsiders together. At the same time, we are supremely conscious of the common bonds of humanity that unite us and transcend national boundaries.

In another sense, no one in the world who prizes liberty and human rights can feel anything but a strong kinship with America. Yours is the one great nation in all of history that was founded on the precept of equal rights and respect for all humankind, for the poorest and weakest of us as well as the richest and strongest.

As your Declaration of Independence put it, in words that have never lost their power to stir the heart: “We hold these truths to be self evident: that all men are created equal; that they are endowed by their creator with certain inalienable rights; that among these are life, liberty, and the pursuit of happiness…” A nation founded on these principles holds a sacred trust: to stand as an example to the rest of the world, to climb ever higher in its practical realization of the ideals of human dignity, brotherhood, and mutual respect. Your constant efforts in fulfillment of that mission, far more that your size or your wealth or your military might, have made America an inspiration to all mankind.

It must be recognized that your model was never one of realized perfection, but of ceaseless aspiration. From the outset, for example, America denied the African slave his freedom and human dignity. But in time you righted that wrong, albeit at an incalculable cost in human suffering and loss of life.

Your impetus has almost always been toward a fuller, more all embracing conception and assurance of the rights that your founding fathers recognized as inherent and God-given.

Yours has ever been an inclusive, not an exclusive, society. And your steps, though they may have paused or faltered now and then, have been pointed in the right direction and have trod the right path. The task has not always been an easy one, and each new generation has faced its own challenges and temptations. But in a uniquely courageous and inspiring way, America has kept faith.

Yet there has been one infinitely tragic and destructive departure from those American ideals in recent memory. It was this Court’s own decision in Roe v. Wade (1973) to exclude the unborn child from the human family. You ruled that a mother, in consultation with her doctor, has broad discretion, guaranteed against infringement by the United States Constitution, to choose to destroy her unborn child.

Your opinion stated that you did not need to “resolve the difficult question of when life begins.” That question is inescapable. If the right to life in an inherent and inalienable right, it must surely exist wherever life exists. No one can deny that the unborn child is a distinct being, that it is human, and that it is alive. It is unjust, therefore, to deprive the unborn child of its fundamental right to life on the basis of its age, size, or condition of dependency.

It was a sad infidelity to America’s highest ideals when this Court said that it did not matter, or could not be determined, when the inalienable right to life began for a child in its mother’s womb.

America needs no words from me to see how your decision in Roe v. Wade has deformed a great nation. The so-called right to abortion has pitted mothers against their children and women against men. It has sown violence and discord at the heart of the most intimate human relationships.

It has aggravated the derogation of the father’s role in an increasingly fatherless society.

It has portrayed the greatest of gifts—a child—as a competitor, an intrusion, and an inconvenience. It has nominally accorded mothers unfettered domination over the independent lives of their physically dependent sons and daughters.

And, in granting this unconscionable power, it has exposed many women to unjust and selfish demands from their husbands or other sexual partners.

Human rights are not a privilege conferred by government. They are every human being’s entitlement by virtue of his humanity. The right to life does not depend, and must not be declared to be contingent, on the pleasure of anyone else, not even a parent or a sovereign.

The Constitutional Court of the Federal Republic of Germany recently ruled that “the unborn child is entitled to its rights to life independently of acceptance by its mother; this is an elementary and inalienable right that emanates from the dignity of the human being.” Americans may feel justly proud that Germany in 1993 was able to recognize the sanctity of human life. You must weep that your own government, at present, seems blind to this truth.

I have no new teaching for America. I seek only to recall you to faithfulness to what you once taught the world. Your nation was founded on the proposition—very old as a moral precept, but startling and innovative as a political insight—that human life is a gift of immeasurable worth, and that it deserves, always and everywhere, to be treated with the utmost dignity and respect.

I urge the Court to take the opportunity presented by the petitions in these cases to consider the fundamental question of when human life begins and to declare without equivocation the inalienable rights which it possesses.

Though this amicus brief to the US Supreme Court was filed by Mother Teresa in February 1994 regarding the cases of Loce v. New Jersey and Krail et al. v. New Jersey which were before the Supreme Court at that time, she refers to the earlier landmark decision of 1973 in which the Court guaranteed the right to abortion.

From a colorful and varied background as a professor of theology, a father of five, business owner, and professional performer Marcellino D’Ambrosio (aka “Dr. Italy”) crafts talks, blog posts, books, and videos that are always fascinating, practical, and easy to understand.  He is a TV and radio personality, New York Times best-selling author, speaker, and pilgrimage host who has been leading people on a journey of discovery for over thirty years.  For complete bio and video, visit the Dr. Italy page.