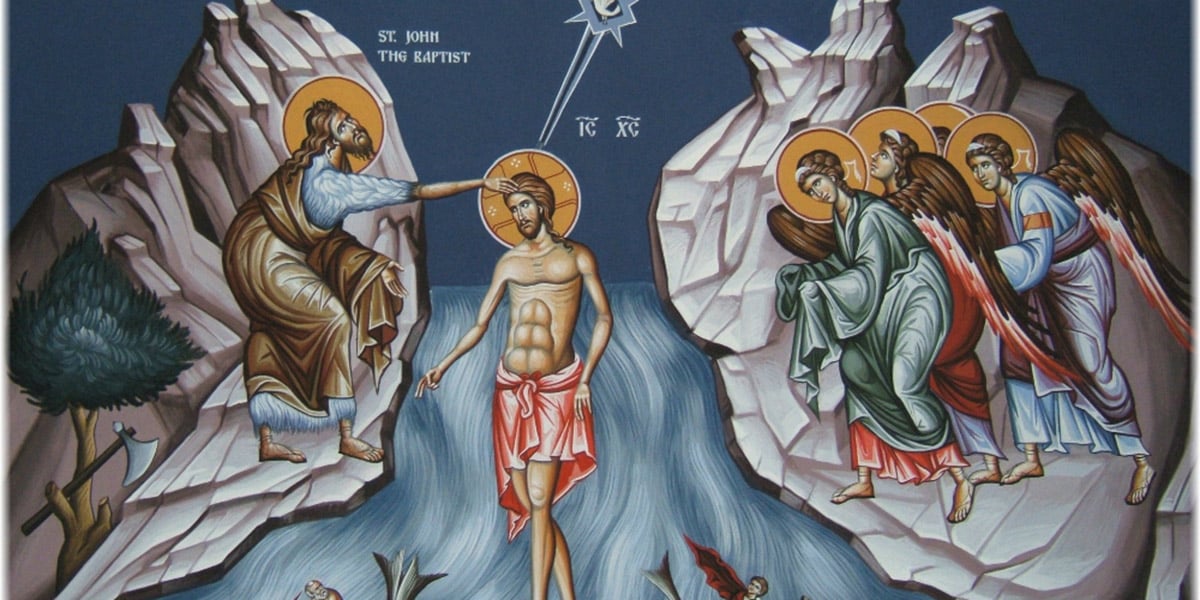 Mystery of the Lord’s Baptism – Maximus of Turin

St. Maximus of Turin for the Feast of the Epiphany on the mystery of the Lord’s baptism in the Jordan.

The Gospel tells us that the Lord went to the Jordan River to be baptized and that he wished to consecrate himself in the river by signs from heaven.

Reason demands that this feast of the Lord’s baptism, which I think could be called the feast of his birthday, should follow soon after the Lord’s birthday, during the same season, even though many years intervened between the two events.

At Christmas he was born a man; today he is reborn sacramentally. Then he was born from the Virgin; today he is born in mystery. When he was born a man, his mother Mary held him close to her heart; when he is born in mystery, God the Father embraces him with his voice when he says: This is my beloved Son in whom I am well pleased: listen to him. The mother caresses the tender baby on her lap; the Father serves his Son by his loving testimony. The mother holds the child for the Magi to adore; the Father reveals that his Son is to be worshiped by all the nations.

That is why the Lord Jesus went to the river for baptism, that is why he wanted his holy body to be washed with Jordan’s water.

Someone might ask, “Why would a holy man desire baptism?” Listen to the answer: Christ is baptized, not to be made holy by the water, but to make the water holy, and by his cleansing to purify the waters which he touched. For the consecration of Christ involves a more significant consecration of the water.

For when the Savior is washed all water for our baptism is made clean, purified at its source for the dispensing of baptismal grace to the people of future ages. Christ is the first to be baptized, then, so that Christians will follow after him with confidence.

I understand the mystery as this. The column of fire went before the sons of Israel through the Red Sea so they could follow on their brave journey; the column went first through the waters to prepare a path for those who followed. As the apostle Paul said, what was accomplished then was the mystery of baptism. Clearly it was baptism in a certain sense when the cloud was covering the people and bringing them through the water.

But Christ the Lord does all these things: in the column of fire he went through the sea before the sons of Israel; so now, in the column of his body, he goes through baptism before the Christian people. At the time of the Exodus the column provided light for the people who followed; now it give light to the heats of believers. Then it made a firm pathway through the waters; now it strengthens the footsteps of faith in the bath of baptism.

For more great resources on the baptism of the Lord Jesus Christ and Epiphany, visit the Epiphany – Baptism of Christ section of the Crossroads Initiative Library.

This excerpt on the mystery of the Lord’s baptiesm comes from a sermon by St. Maximus of Turin for the Feast of the Epiphany (Sermo 100, de sancta Epiphania 1, 3: CCL 23, 398-400),  It appears in the Roman Office of Readings for the Friday between the Feasts of the Epiphany and the Baptism of the Lord.  The accompanying biblical reading is from Isaiah 65:13-25.  Maximus was one of the Early Church Fathers and lived during the late third and early fourth centuries.

To read St. Gregory of Nazianzen, another early church father, on the Baptism of the Lord as a mystery of light, click here.

Banner/featured image of the Baptism of the Lord Jesus Christ by an unknown artist. Public domain.

Virtually nothing is known about the life of St. Maximus, except that he was the bishop of Turin, in Northern Italy, and died sometime during the first two decades of the fifth century, AD, He is the first known bishop of Turin, and as such is the patron saint of the city to this day. He lived during the discouraging age that witnessed the Roman armies retreating before the barbarian hordes. Nonetheless, over 100 of Maximus’ homilies survive. The mostly short and poetic sermons of this Early Church Father were so moving that they were passed down through the centuries as models for medieval homilists to follow. Biography by Dr. Italy