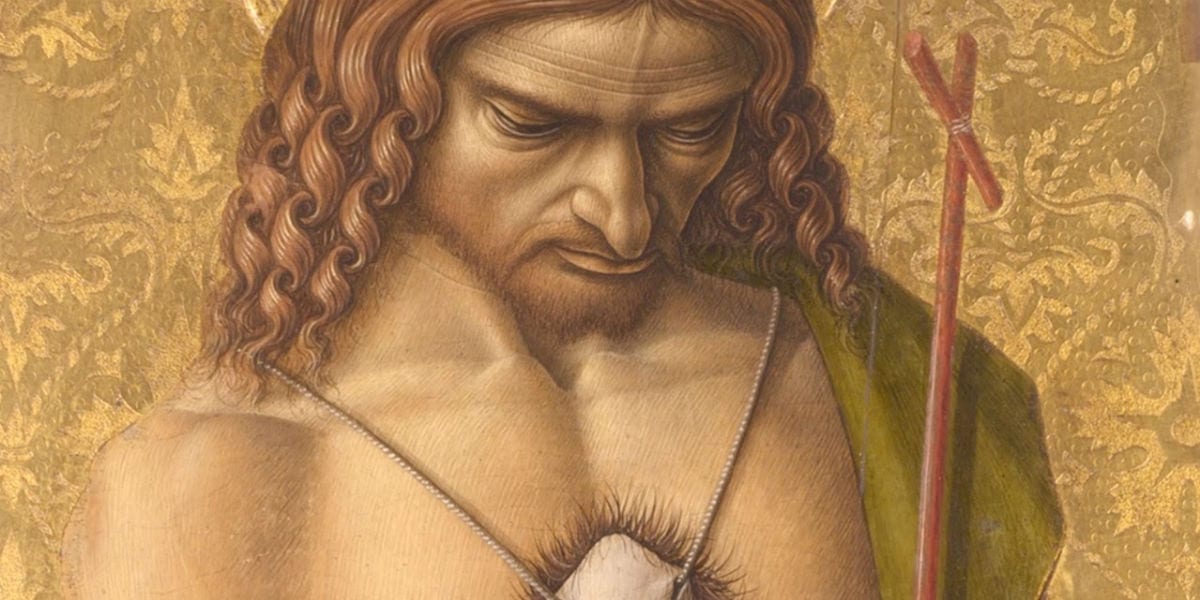 The Beheading and Martyrdom of John the Baptist is remembered on August 29. Saint Bede here emphasizes that John died for Christ since he was killed for speaking the truth and Christ is the truth. He who baptized Christ was baptized in his own blood, thus preparing the way for Jesus’ own sacrifice.  Even in death, then, he was a forerunner and precursor.

A s forerunner of our Lord’s birth, preaching and death, the blessed John showed in his struggle a goodness worthy of the sight of heaven. In the words of Scripture: Though in the sight of men he suffered torments, his hope is full of immortality.

We justly commemorate the day of his birth with a joyful celebration, a day which he himself made festive for us through his suffering and which he adorned with the crimson splendor of his own blood. We do rightly revere his memory with joyful hearts, for he stamped with the seal of martyrdom the testimony which he delivered on behalf of our Lord.

There is no doubt that blessed John suffered imprisonment and chains as a witness to our Redeemer, whose forerunner he was, and gave his life for him. His persecutor had demanded not that he should deny Christ, but only that he should keep silent about the truth. Nevertheless, he died for Christ. Does Christ not say: I am the truth? Therefore, because John shed his blood for the truth, he surely died for Christ.

Such was the quality and strength of the man who accepted the end of this present life by shedding his blood after the long imprisonment. He preached the freedom of heavenly peace, yet was thrown into irons by ungodly men; he was locked away in the darkness of prison, though he came bearing witness to the Light of life and deserved to be called a bright and shining lamp by that Light itself, which is Christ.

John was baptized in his own blood, though he had been privileged to baptize the Redeemer of the world, to hear the voice of the Father above him, and to see the grace of the Holy Spirit descending upon him. But to endure temporal agonies for the sake of the truth was not a heavy burden for such men as John; rather it was easily borne and even desirable, for he knew eternal joy would be his reward.

Since death was ever near at hand through the inescapable necessity of nature, such men considered it a blessing to embrace it and thus gain the reward of eternal life by acknowledging Christ’s name. Hence the apostle Paul rightly says: You have been granted the privilege not only to believe in Christ but also to suffer for his sake. He tells us why it is Christ’s gift that his chosen ones should suffer for him: The sufferings of this present time are not worthy to be compared with the glory that is to be revealed in us.

This excerpt from a homily by St. Bede (Hom 23: CCL 122, 354, 356-357) is used in the Roman office of Readings for the liturgical memorial of the Beheading and Martyrdom of John the Baptist on August 29.   Since he was killed for speaking the truth and Christ is the truth, John died for Christ.  The Baptist is baptized in his own blood, the forerunner of Christ in both his ministry and his death.

St. Bede, born around 673 AD in the northeast area of what is now England, entered the Benedictine monastery of Warmouth at age 7. Celtic monasticism had existed in the British Isles for centuries, but Benedictine Monasticism was a rather recent arrival when Bede entered monastic life. He devoted himself from the time he entered the monastery to prayer, the study of Scripture and history, and ultimately teaching and writing after becoming a deacon and then a priest. Even in his lifetime he was renowned for the greatness of his biblical teaching and historical writing for which he is known as the father of British history. There is much about the early secular and ecclesiastical history of the British Isles that we would simply not know were it not for the writings of Saint Bede. It was not long after his death in 735 AD that Bede was given the popular title “Venerable.” Known as one of the last Fathers of the Church, he was also according the title of Doctor of the Church by Pope Leo XIII in 1899. His tomb is located in the beautiful Anglican cathedral of Durham, which dates back to Norman times and also houses the relics of another great saint of early Britain, Saint Cuthbert.