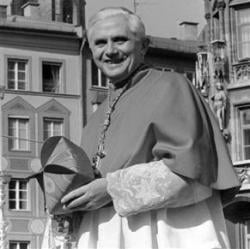 The biography of Joseph Ratzinger, the future Pope Benedict XVI, begins, of course, with his birth in Bavaria, Germany, on April 16, 1927, Holy Saturday, and baptized the very same day, in the newly blessed Easter water. This special baptism was seen from the beginning of his life as a very special blessing of Divine Providence. Though he and the Ratzinger family saw Nazism as the spirit of Anti-Christ, Joseph was forced into the German army near the end of World War II. He escaped, surrendered to the US forces, and spent a few months in a POW camp. Upon his release, he and his brother Georg entered the seminary and were ordained priests together on June 29, 1951. After receiving his doctorate in theology from the University of Munich in 1953, Fr. Joseph Ratzinger became a professor of dogmatic theology at the University of Bonn. When Vatican Council II began in 1962, Fr. Ratzinger, only 35 years old at the time, was named chief “peritus” or theological advisor to the Archbishop of Cologne, Joseph Cardinal Frings and accompanied him to all four sessions of the council, having input on the writing of several of the Council Documents. From 1969 until 1977 Fr. Ratzinger taught theology at the University of Regensburg and, from 1969 until 1980, he was a member of the Vatican’s International Theological Commission. In 1972, together with French theologian Henri de Lubac and the Swiss priest Hans Urs von Balthasar, Ratzinger founded the theological journal Communion which now has editions in 14 countries. It is notable that the Polish edition of Communio was brought about by the archbishop of Krakow, Karol Wojtyla. Fr. Joseph Ratzinger was ordained archbishop of Munich-Freising on May 28, 1977 and was created a cardinal priest by Pope Paul VI on June 27, 1977, his titular church in Rome being St. Mary of Consolation (in Tiburtina). On April 5, 1993 Cardinal Ratzinger was transferred by Pope John Paul II to the order of cardinal bishops as titular bishop of the suburbicarian see of Velletri-Signi. In 1981 Cardinal Ratzinger became the Prefect (head) of the Congregation for the Doctrine of the Faith, the Vatican department in charge of protecting the sacred deposit of the faith handed on from the apostles. As such, he was Pope John Paul II’s chief assistant in the formulation of the Pope’s teaching and writing. There is perhaps no one who worked more closely with Pope John Paul II during the course of his pontificate. Cardinal Ratzinger would generally have lengthy private meetings with the Pope twice per week. Before his election as Pope Benedict XVI, Cardinal Ratzinger also served president of the Pontifical Biblical and Theological Commissions. On November 6, 1998, Cardinal Ratzinger was appointed Vice-dean of the Sacred College of Cardinals. Prior to the death of Pope John Paul II, he served as a member of the Congregation of Bishops, the Congregation for Divine Worship and the Discipline of the Sacraments, the Congregation for Catholic Education, the Congregation for the Evangelization of Peoples, the Congregation for the Oriental Churches, the Council for Christian Unity, the Council for Culture, the Commission Ecclesia Dei, and the Commission for Latin America. As prefect of the Congregation for the Doctrine of the Faith, Cardinal Ratzinger had a decisive role in the writing of the “Joint Declaration on the Doctrine of Justification,” signed in October 1999 by the Holy See and the World Lutheran Federation in Augsburg, Germany. The declaration, one of the most important ecumenical steps since Martin Luther’s split with the Catholic Church in the 16th century, took place thanks to the dialogue held in November 1998 between Cardinal Ratzinger and Lutheran Bishop Johannes Hanselman in Munich. As he approached his mid-seventies, Cardinal Ratzinger attempted to retire several times, but Pope John Paul II would not accept his resignation. It seems Pope John Paul II knew God had other plans for the German Cardinal. At 78, Cardinal Joseph Ratzinger was elected as Pope Benedict XVI on April 19, 2005, only the second day of the conclave. This speedy election demonstrates a remarkable consensus on the part of the 115 Cardinals who elected him by a two-thirds majority. Their vote was for a defender of the truth, a man of prayer, a humble servant of the servants of God. Besides his academic articles and official Church documents, the new Pope Benedict XVI provides us with a window into his mind and heart through several books, the Ratzinger Report (1996), The Spirit of the Liturgy (2000), God and the World (2002) and Introduction to Christianity. Joseph Ratzinger is the oldest cardinal to be named pope since Clement XII, who was also 78 when he became pope in 1730. He is the first German pope since Victor II (1055-1057). Biography by Dr. Italy