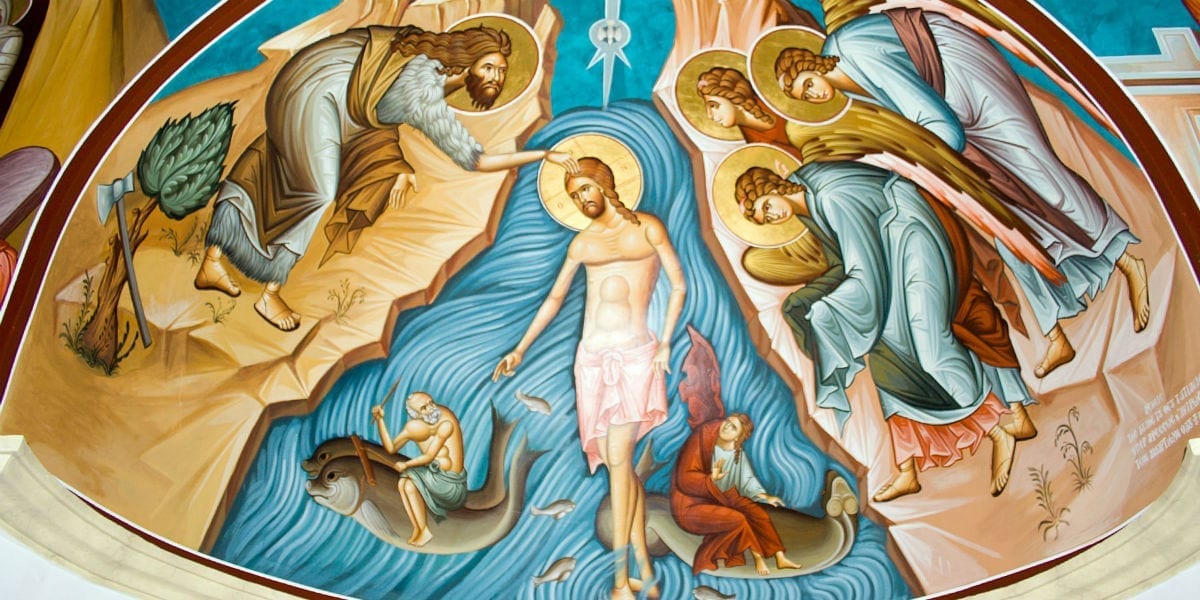 Baptism in Waters of Immortality – Hippolytus

That Jesus should come and be baptized by John is surely cause for amazement. To think of the infinite river that gladdens the city of God being bathed in a poor little stream of the eternal, the unfathomable fountainhead that gives life to all men being immersed in the shallow waters of this transient world!  He who fills all creation, leaving no place devoid of his presence, he who is incomprehensible to the angels and hidden from the sight of man, came to be baptized because it was his will. And behold, the heavens opened and a voice said: “This is my beloved Son in whom I am well pleased.”

The beloved Father begets love, and spiritual light generates light inaccessible. In his divine nature he is my only Son, though he was known as the son of Joseph. This is my beloved Son. Though hungry himself, he feeds thousands; though weary, he refreshes those who labor. He has no place to lay his head yet holds all creation in his hand. By his passion [inflicted on him by others], he frees us from the passions [unleashed by our disobedience]; by receiving a blow on the cheek he gives the world its liberty; by being pierced in the side he heals the wound of Adam.

I ask you now to pay close attention, for I want to return to that fountain of life and contemplate its healing waters at their source.

The Father of immortality sent his immortal Son and Word into the world; he came to us men to cleanse us with water and the Spirit. To give us a new birth that would make our bodies and souls immortal, he breathed into us the spirit of life and armed us with incorruptibility. Now if we become immortal, we shall also be divine; and if we become divine after rebirth in baptism through water and the Holy Spirit, we shall also be coheirs with Christ after the resurrection of the dead.

Therefore, in a herald’s voice I cry: Let peoples of every nation come and receive the immortality that flows from baptism. This is the water that is linked to the Spirit, the water that irrigates Paradise, makes the earth fertile, gives growth to plants, and brings forth living creatures. In short, this is the water by which a man receives new birth and life, the water in which even Christ was baptized, the water into which the Holy Spirit descended in the form of a dove.

Whoever goes down into these waters of rebirth with faith renounces the devil and pledges himself to Christ. He repudiates the enemy and confesses that Christ is God, throws off his servitude, and is raided to filial status. He comes up from baptism resplendent as the sun, radiant in his purity, but above all, he comes as a son of God and a coheir with Christ. To him and to his most holy and life-giving Spirit be glory and power now and for ever. Amen.

The above is an excerpt from a sermon on the Epiphany (nn. 2.6-8 10: PG 10, 854. 858-859. 862) attributed to Saint Hippolytus, an Early Church Father.  It appears in the Roman Office of Readings for the Tuesday between the Feast of the Epiphany and the Feast of the Baptism of the Lord.   It is a marvelous resource for better understanding the sacrament of baptism.  The accompanying biblical reading is taken from Isaiah 63:19b- 64:11.

Saint Hippolytus was a priest in the Church of Rome in the late second and early third centuries.  Known for his extensive and profound teaching, he is undoubtedly the most important Roman theologian of the third century, in a time when the liturgy and all teaching of the Church in Rome was done in Greek.  When Callistus, whom he considered to be a liberal, was elected to the Papacy, St. Hippolytus contested the election, apparently setting himself up as an anti-pope.  His separation from full communion with the Church lasted for several years.  Yet ultimately he and Pope Callistus’ lawful successor, Pontianus, found themselves suffering side by side during a wave of persecution.  They reconciled and died together for their faith in the mines of Sardinia in 235 AD.

St. Hippolytus’ great work “The Apostolic Tradition“ was only rediscovered in the 20th century, providing an enlightening and extensive glimpse into the liturgical and devotional life of Roman Christians around the year 200 AD.