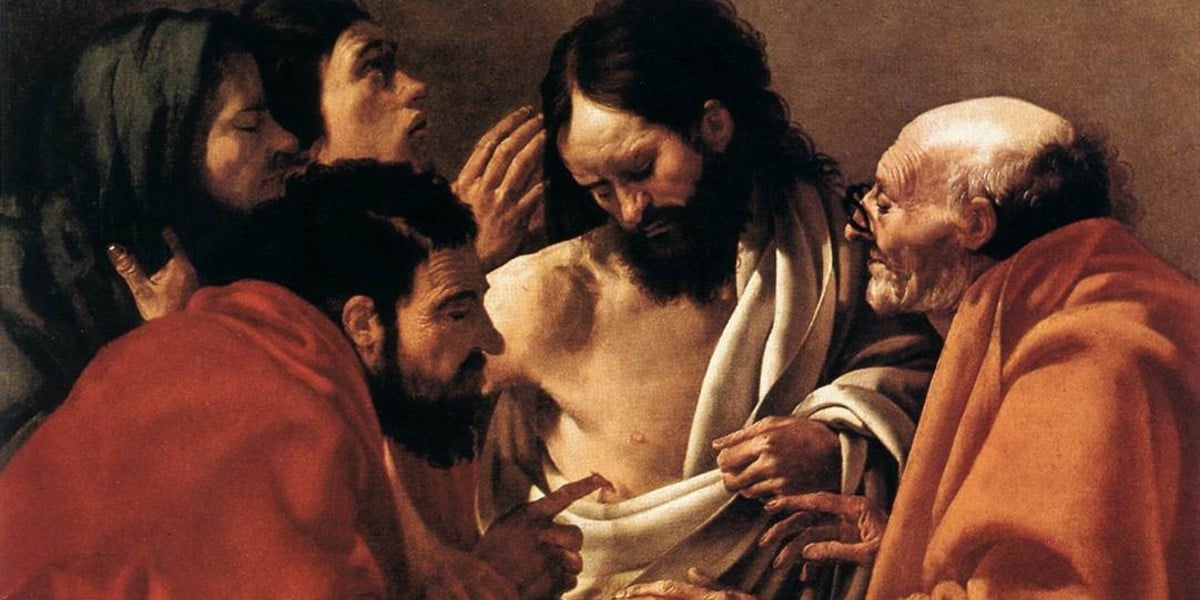 St. Gregory the Great’s commentary on the Apostle Thomas and his struggle with doubt.  It makes for especially good reading for the Octave of Easter or the Feast of St. Thomas, the Apostle, which since the fourth century has been commemorated on July 3, the date when the apostle’s body was translated to Edessa.  Though nothing certain is known of St. Thomas’ life after Pentecost, he is said to have subsequently preached the Gospel to the people of India.  Known as “Doubting Thomas” or “Thomas the Doubter,” his profession of faith in Christ as Lord and God is the climax of the Gospel of John.

Thomas, one of the twelve, called the Twin, was not with them when Jesus came. He was the only disciple absent; on his return he heard what had happened but refused to believe it. The Lord came a second time; he offered his side for the disbelieving disciple to touch, held out his hands, and showing the scars of his wounds, healed the wound of his disbelief.

Dearly beloved, what do you see in these events? Do you really believe that it was by chance that this chosen disciple was absent, then came and heard, heard and doubted, doubted and touched, touched and believed? It was not by chance but in God’s providence. In a marvelous way God’s mercy arranged that the disbelieving disciple, in touching the wounds of his master’s body, should heal our wounds of disbelief.

The disbelief of Thomas has done more for our faith than the faith of the other disciples. As he touches Christ and is won over to belief, every doubt is cast aside and our faith is strengthened. So the disciple who doubted, then felt Christ’s wounds, becomes a witness to the reality of the resurrection.

The Difference between Believing & Seeing

Touching Christ, he cried out: My Lord and my God. Jesus said to him: Because you have seen me, Thomas, you have believed. Paul said: Faith is the guarantee of things hoped for, the evidence of things unseen. It is clear, then, that faith is the proof of what can not be seen. What is seen gives knowledge, not faith. When Thomas saw and touched, why was he told: You have believed because you have seen me? Because what he saw and what he believed were different things. God cannot be seen by mortal man. Thomas saw a human being, whom he acknowledged to be God, and said: My Lord and my God. Seeing, he believed; looking at one who was true man, he cried out that this was God, the God he could not see.

Faith without Works is Dead

What follows is reason for great joy: Blessed are those who have not seen and have believed. There is here a particular reference to ourselves; we hold in our hearts one we have not seen in the flesh. We are included in these words, but only if we follow up our faith with good works. The true believer practices what he believes. But of those who pay only lip service to faith, Paul has this to say: They profess to know God, but they deny him in their works. Therefore James says: Faith without works is dead.

For more resources on Doubting Thomas see the EASTER section of the Crossroads Initiative Library.

For more on the Doubt & Faith of the Apostle Doubting Thomas, see the ST. THOMAS Section of the Crossroads Initiative Library.

Pope Saint Gregory I, commonly known as St. Gregory the Great, was one of the most fascinating of early Church Fathers. Son of a Roman Senator, Saint Gregory was born in Rome around 540AD and, following his dad’s footsteps, embarked upon a political career. He rose through the ranks of civil service and eventually became Prefect (mayor) of the city of Rome. At that point, Gregory discerned a call to deeper life with God so promptly gave away his wealth to the poor and entered the monastery of St. Andrew (ca. 574) where he ultimately became abbot (585).

The Pope, recognizing his talent, named him as one of the seven deacons of Rome and then sent him on a diplomatic mission as papal legate to the imperial city of Constantinople where he remained for five years. Upon the death of the pope in 590, St. Gregory was elected to succeed him, the first monk ever elected as the Successor of Peter.

This man who wanted nothing else but to be a simple monk had to undergo a profound interior struggle before accepting this election as the will of God. Immediately he set to work putting in order the affairs of a Church and society in chaos. Like his predecessor Pope Leo the Great, he negotiated a “separate peace” with the invading barbarians, in this case the Lombards (592-3). In light of the powerlessness of the Byzantine emperor in the West, he took over civic as well as spiritual leadership of Italy, appointing governors of the various Italian cities. He, who had spent his own wealth to relieve the suffering of the poor, did much the same with the resources of the church. He insisted on Papal primacy, and took the initiative in evangelization, sending monks from his former monastery led by Augustine to convert the Angles of Britain.

His abundant writings are more practical and spiritual than doctrinal or theoretical. His Liber Regulae Pastoralis (592 ca) sets the standard of what a bishop should be. His Dialogues recounts the life of his master, St. Benedict, and other saints of the period. His Moralia in Job is a commentary on the book of Job according to the literal, moral, and spiritual senses of Scripture.  Very devoted to the liturgy, Gregory promoted sacred music and to this day the plainsong that comes down to us from this era is known as “Gregorian Chant.”

Gregory, who died in 604 AD, is known as one of the four greatest Latin-speaking Fathers and Doctors of the Church. He is one of the few men in the history of the Church whose name is customarily followed by “the Great.” His liturgical memorial is on September 3, the anniversary of his consecration as bishop of Rome and successor of St. Peter. His favorite title for this exalted office was “servant of the servants of God.” For more on the life and impact of St. Gregory the Great, see chapter 25 of Marcellino D’Ambrosio’s book When the Church Was Young: Voices of the Early Fathers. Biography by Dr. Italy