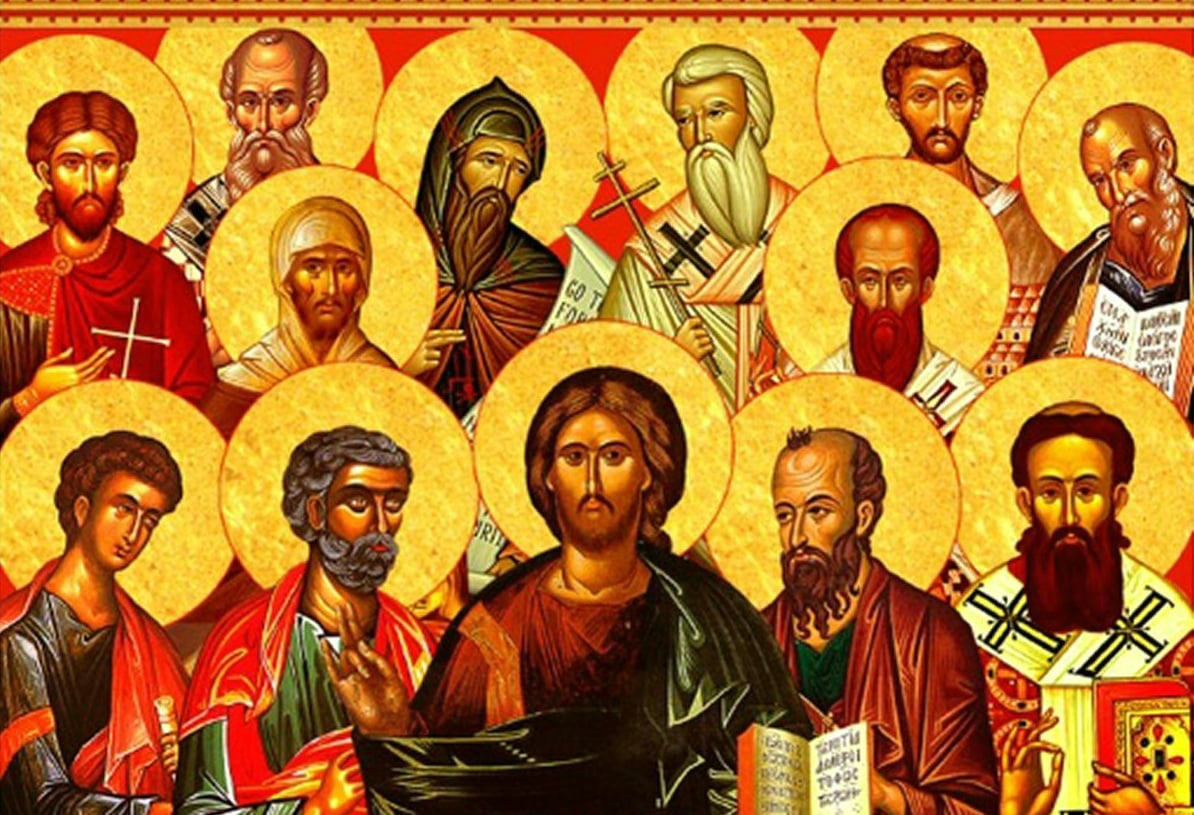 Who were the Early Church Fathers (aka Fathers of the Church)?  Why are they important in Christian history and why are they relevant today?  An overview and introduction.

In discussions that deal with topics ranging from the Creed to the biblical canon, a certain group of people called the Early Church Fathers (a.k.a. Fathers of the Church) invariably are mentioned.  Who are these people and what makes them so important in the history of Christianity?

In trying to determine who rightly can be called a “Father of the Church” (or “Early Church Father) one must keep in mind that “Father of the Church” is not an officially conferred distinction.  There is no definitive list as there is for those that have honored with the title “Doctor of the Church.” Rather, “Early Church Father” is a title that gradually came to be applied to certain Christian leaders distinguished by four characteristics: antiquity, holiness, orthodoxy, and Church approval. This fourfold qualification, however, is vague and sometimes misleading. At first glance, it would seem to fit the apostles, but they, along with all other Christians of the New Testament era (e.g., Timothy), are never referred to as Early Church Fathers. On the other hand, there are some indisputably regarded as “Fathers of the Church” whose generally orthodox teaching was marred by some doctrinal errors and whose lives were far from exemplary (e.g., St. Hippolytus).

A better clue to understanding what the title “Church Father” means is provided by St. Clement of Alexandria: “Words are the progeny of the soul. Hence we call those that instructed us fathers” (Stromateis1.1.2-2.1; cf. Irenaeus, Against Heresies 4.41.2). Since the principal teacher of any Christian community is its bishop, the title “Father” was first applied to bishops. In fact, the bishops who gather in church councils have been from early times referred to as “council fathers.” But because many of the most important early Christian teachers were laymen (e.g., St. Justin), deacons (such as perhaps St. Ephrem), and priests (e.g., St. Jerome), it became customary from the fourth century to reckon these too among “the Fathers.” In the doctrinal disputes that made the Ecumenical councils necessary, all parties recognized the inspired Scriptures as the first court of appeal (see Vincent of Lerins, Commonitory, 2.4-5; 29.76).

But when there was conflict about the truly Catholic and orthodox interpretation of the Scriptures, all sought backing for their position in the writings of “the Fathers.” By this they meant teachers of an earlier era who demonstrated how the apostolic scriptures were understood and applied by the apostles and their immediate successors. While all early Christian pastors and catechists “fathered” their particular portion of the flock during their lifetime, only those that put their teaching in writing could continue to serve as a guide to the whole Church in every age.

So the term “Father of the Church” finally came to refer to important Christian writers after the New Testament era who, because of closeness to that era, witness to the authentically apostolic way of interpreting the Scriptures handed on to them by the Catholic Tradition. These writers played an irreplaceable and unrepeatable role in transmitting Christian doctrine and bringing it to mature expression, at least in its most fundamental features. While the Church’s understanding of revelation will continue to deepen until the Lord returns, the dogmas of the Trinity and the Incarnation, which stand at the center of the “Hierarchy of Truths” (UR 11), were defined once and for all during the period of the Fathers (a.k.a. the patristic era). It is significant that the age of the Early Church Fathers, commonly regarded as closing with St. John Damascene (d. 749), is roughly co-terminus with the period of the first seven great Ecumenical Councils which defined these two central mysteries of the faith and drew out their most important implications. No Catholic teacher after this time, no matter how stellar, is reckoned among the Church Fathers.

So, a succinct definition of the Early Church Fathers would be those Christian writers from approximately AD 100-800 who passed on and clarified the apostolic tradition.

Diversity of the Early Church Fathers

The first language of the universal Church was Greek, the language of the New Testament. All of the Early Church Fathers, from all parts of the Christian world, continued to write in Greek until about 200 when Tertullian, a North African theologian, wrote a treatise in Latin. From then on, Latin gradually became the language of the Western Fathers of the Church. In the Eastern half of the Mediterranean world, many continued to write in Greek, especially those in the urban areas controlled by the Byzantine Empire. In rural localities and territory outside the empire, some Christian authors (e.g., St. Ephrem) began to write in local vernaculars such as Syriac-Aramaic, a dialect of the language spoken by Christ. This wonderful diversity of culture and location makes it that much clearer that, whenever the Fathers teach the same doctrine or describe the same liturgical practice, they are witnessing to something that came not from them, but to them–the apostolic Tradition.

With Constantine’s proclamation of religious toleration (known as the Edict of Milan) in AD 313, persecution of Christians came to an end.  The first Ecumenical council, convened by Constantine a few years later in the city of Nicaea, (AD 325) marked a momentous event for the Church.  For this reason, the writers before these two interrelated events are known as the Ante-Nicene Fathers (“ante” meaning before). They in turn are commonly divided into two groups. The Apostolic Fathers are those who wrote during the generation or two after the close of the New Testament era (from about AD 95-150). They are so-called because they are thought to have had living contact with the apostles and so are particularly precious witnesses to primitive apostolic Christianity. The few writings from this period that have survived are pastoral and practical rather than speculative. They include the anonymous “Teaching of the Twelve Apostles,” otherwise known as the Didache, which is the earliest work after the New Testament describing Christian worship. They also include letters from St. Ignatius, bishop of Antioch, St. Polycarp, who reportedly sat at the feet of the apostle John, and St. Clement, the bishop of Rome, who wrote to the Church in Corinth around 95 AD. It is fascinating that Clement’s letter, probably written around the same time as John’s Gospel, was regarded as so authoritative in the early church that it was copied and passed to churches all over the known world and considered by many as part of the New Testament scriptures.

Unlike the apostolic fathers who were generally simple, uncultivated men, the Ante-Nicene Fathers from 150-325AD included the first great Christian intellectuals who sought a synthesis between biblical truth and the best of classical wisdom. Employing the rigorous intellectual tools of Greek philosophy in their reflection on the mysteries of the faith, these writers contributed to the clarification and development of Christian doctrine as well as to its faithful transmission. They are generally known as the Apologists and Anti-heretical Writers since virtually all of them wrote either treatises combating various Christian heresies or written defenses of Christianity addressed to the Roman government known as “apologies.” Among them we find such luminaries as St. Justin, the pagan philosopher turned Christian apologist, St. Irenaeus, the implacable foe of Gnosticism, Origen, the greatest Scripture scholar of the Ante-Nicene period, and Tertullian, the first writer to use the term “Trinity.” 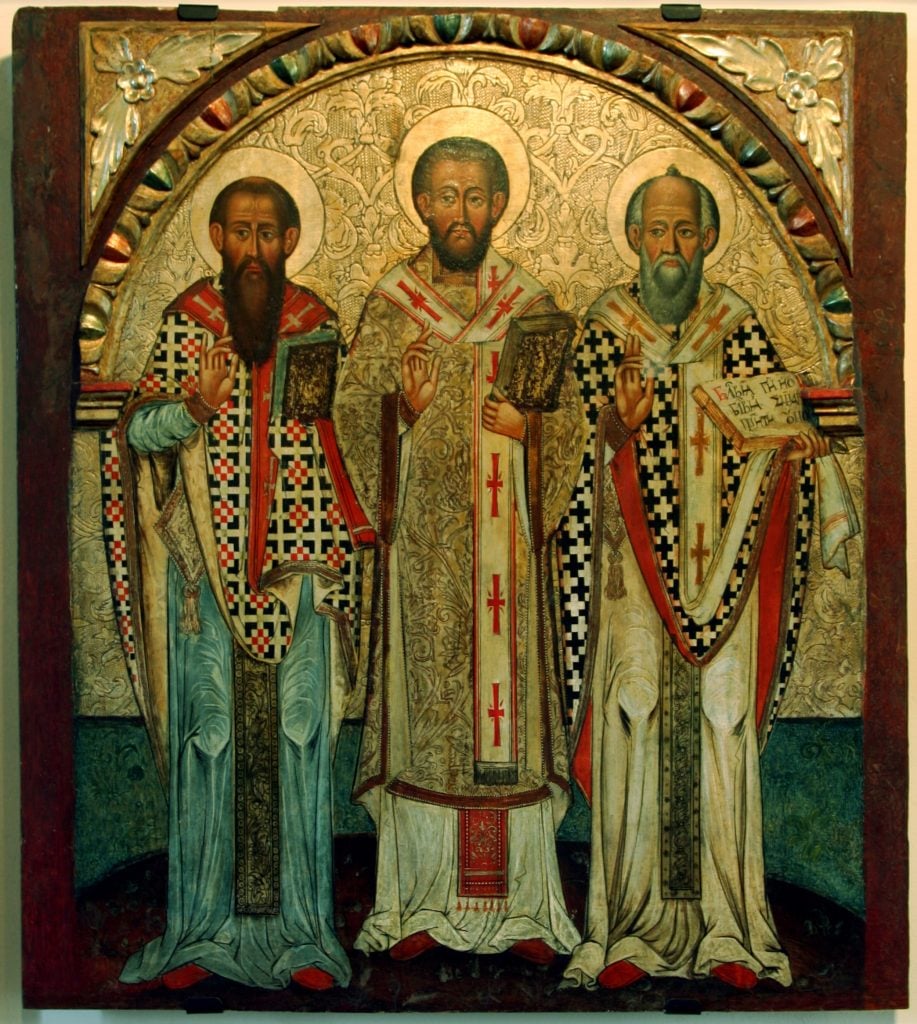 The Nicene and Post-Nicene Fathers are likewise divided into two groups. The fourth and fifth centuries is the era of the first four ecumenical councils which defined the dogmas of the Trinity and Christ’s divinity and full humanity. Under the influence of the Fathers of this period, the biblical canon and the Nicene Creed assumed their final shape and the various liturgical rites of the Church (e.g., Roman and Byzantine) took on many of their distinctive characteristics. For these reasons, scholars often refer to this era as the Golden Age of Patristic Literature. Notable among the eastern fathers of this period are Athanasius, tireless defender of Christ’s divinity, Ephrem, the most poetic of all the Fathers, the friends Basil and Gregory of Nazianzen, known as “Cappadocians” after the region of their birth, and John Chrysostom, whose name is associated with the principal Byzantine liturgy. The western Church Fathers of this period include Ambrose, the fearless bishop of Milan, Jerome, the great but irascible Scripture scholar, and the incomparable Augustine, whose corpus of over five million words came to serve as the second bible of the western church. The fathers of the sixth through the eighth centuries, often referred to as the Later Fathers, did not have the same decisive impact on the Christian tradition. Their role, and the role of the three ecumenical councils that took place in this period, was mainly to defend and draw out some important implications of the trinitarian and christological teaching of the first four councils. Gregory the Great, monk turned Pope, is the greatest figure in the west during this time. In the east, the most outstanding figures are Maximus the Confessor, who suffered torture in defense of Christ’s full humanity, and John Damascene who defended the veneration of icons against those who attacked them.

Authority and Relevance of the Early Church Fathers

Some of the Early Church Fathers, especially those of the Golden Age, have been officially recognized by the Pope as “Doctors of the Church” meaning that they are extraordinarily reliable teachers of the Christian faith. It is important to remember, however, that the Catholic Church does not regard even these as personally infallible in all that they teach. It is rather in their common teaching, or consensus, that the Fathers infallibly witness to the authentic Catholic tradition (Vatican Council I, Dei Filius, 2; Vincent of Lerins, Commonitory 2.6, 3.8, 28.72-73). In attempting to defend a particular doctrine such as Christ’s divinity, the apologist would do well to cite not just one Father but many and from as wide a geographical and cultural range as possible in order to demonstrate this consensus patrum. The Eastern Orthodox consider the Fathers to be as authoritative as Catholics do, though they tend to be somewhat critical of Augustine. Anglicans and many other Protestants revere the Fathers as well, though some are more suspicious of writings produced after the Church became entangled with the Roman state. In fact patrology (the study of the Church Fathers) enjoyed a renaissance following the Protestant Reformation as Catholic and Protestant scholars alike sought patristic support for their respective doctrines. It is notable, however, that many of the most important texts of the Ante-Nicene Fathers were not generally available at the time of the Reformation. Some, like the Didache and the Apostolic Tradition of Hippolytus, provide invaluable information regarding disputed points and yet were only recovered in the nineteenth and twentieth centuries. These and other writings of the Fathers of the Church prove that many aspects of doctrine and piety rejected by some as medieval inventions (e.g., infant baptism) are in fact part of the legacy of the ancient Church.

For a lively overview of and introduction to 23 of the most important Early Church Fathers, get a copy of Marcellino D’Ambrosio’s best-selling book, When the Church was Young: Voices of the Early Fathers (Servant, 2014).