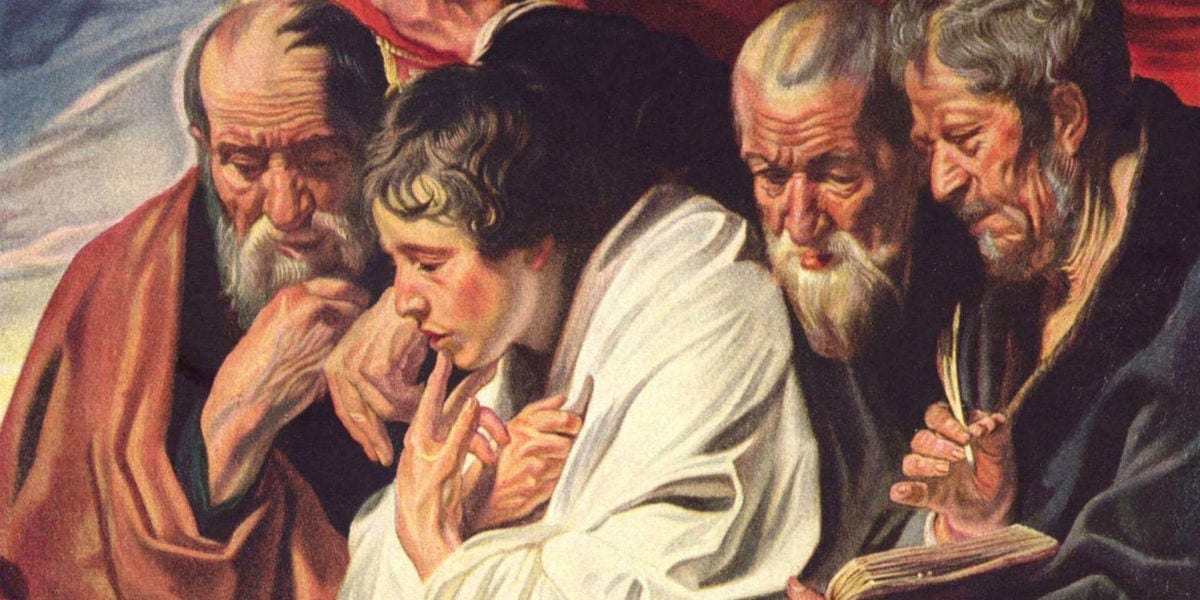 St. Francis Xavier, Patron Saint of Foreign Missions, was clearly one of the greatest missionaries and evangelists of all time. Though not all of us are called to foreign missions, the Second Vatican Council, Pope St. Paul VI, and Pope St. John Paul II remind us forcefully that every Christian is called to evangelize.  Here Francis Xavier, writing back to Europe while on a missionary journey, shares his passion for preaching the gospel.

We have visited the villages of the new converts who accepted the Christian religion a few years ago. No Portuguese live here the country is so utterly barren and poor. The native Christians have no priests. They know only that they are Christians. There is nobody to say Mass for them; nobody to teach them the Creed, the Our Father, the Hail Mary and the Commandments of God’s Law.

I have not stopped since the day I arrived. I conscientiously made the rounds of the villages. I bathed in the sacred waters all the children who had not yet been baptized. This means that I have purified a very large number of children so young that, as the saying goes, they could not tell their right hand from their left. The older children would not let me say my Office or eat or sleep until I taught them one prayer or another. Then I began to understand: “The kingdom of heaven belongs to such as these”.

I could not refuse so devout a request without failing in devotion myself. I taught them, first the confession of faith in the Father, the Son and the Holy Spirit, then the Apostles’ Creed, the Our Father and Hail Mary. I noticed among them persons of great intelligence. If only someone could educate them in the Christian way of life, I have no doubt that they would make excellent Christians.

Many, many people hereabouts are not becoming Christians for one reason only: there is nobody to make them Christians. Again and again I have thought of going round the universities of Europe, especially Paris, and everywhere crying out like a madman, riveting the attention of those with more learning than charity: “What a tragedy: how many souls are being shut out of heaven and falling into hell, thanks to you!”

I wish they would work as hard at this as they do at their books, and so settle their account with God for their learning and the talents entrusted to them.

This thought would certainly stir most of them to meditate on spiritual realities, to listen actively to what God is saying to them. They would forget their own desires, their human affairs, and give themselves over entirely to God’s will and his choice. They would cry out with all their heart: Lord, I am here! What do you want me to do?  Send me anywhere you like – even to India.

For a PODCAST by Dr. Italy describing how all of us, even without going to the missions, can be missionaries, listen to EVANGELIZATION 101.

This post is an excerpt from St. Francis Xavier’s letter to St. Ignatius of Loyola (E Vita Francisci Xaverii, auctore H. Tursellini, Romae, 1956, Lib. 4, epist. 4 [1542] et 5 [1544]).  It speaks of the duty & mission to evangelize. It appears in the Roman Office of Readings for the liturgical memorial of St. Francis Xavier on December 3.  Francis Xavier, a Jesuit, is the patron saint of foreign missions.

Son of an aristocratic Spanish-Basque family, he was born in Navarre in 1506. While studying at the University of Paris, he met St. Ignatius Loyola and became one of the first members of the Society of Jesus, also known as the Jesuits. After ordination to the priesthood, Francis left Portugal to evangelize the West Indies, making Goa, on the west coast of India, his headquarters. He founded the church in Japan and was on his way to China when he fell ill and died in 1552. He is clearly one of the greatest Christian missionary of all time and was named “patron of the Foreign Missions” by Pope St. Pius X. Biography by Dr. Italy