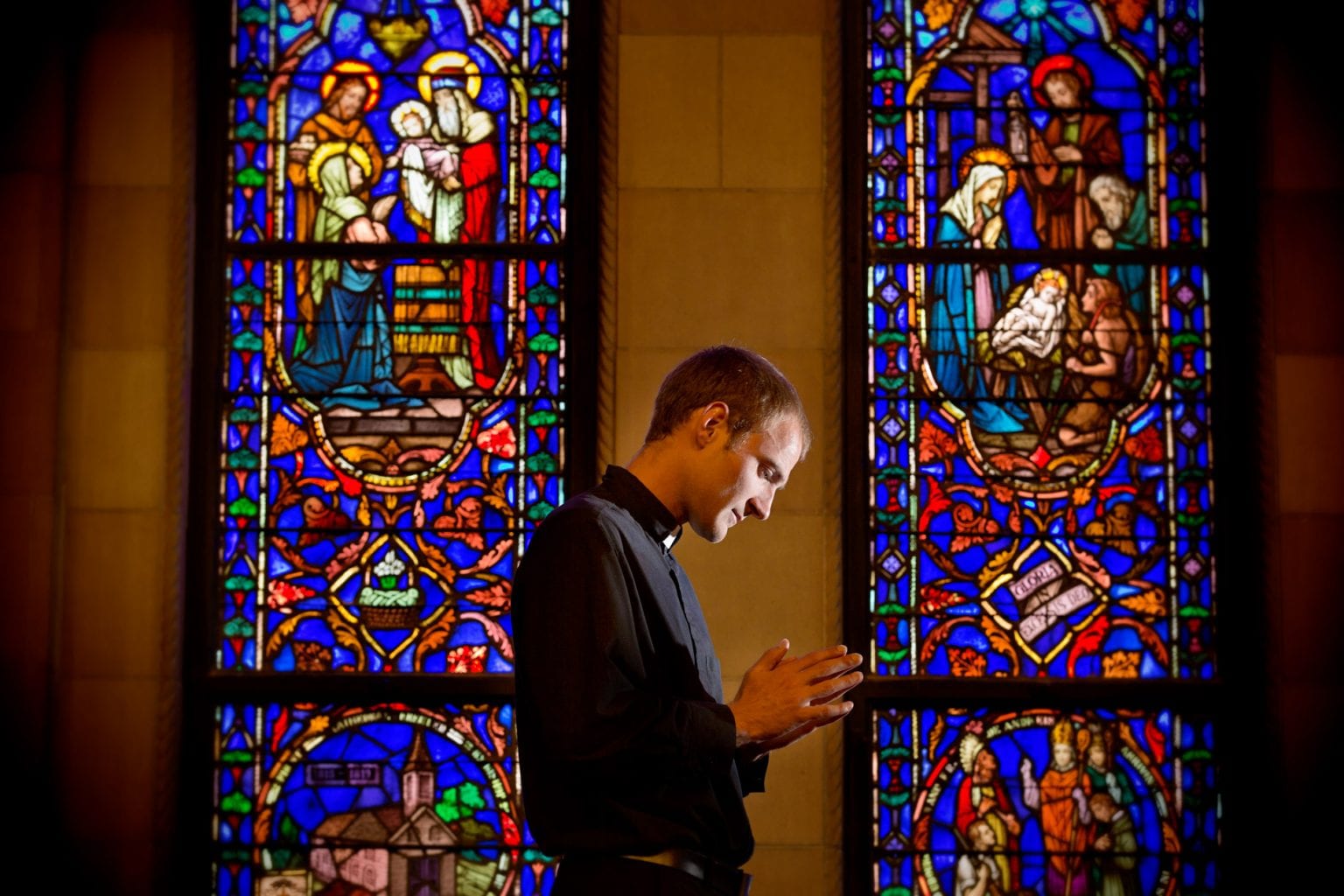 Heroes & Warriors Welcome at This Seminary

Imagine this scene: It’s 6 a.m. on a wintry day. More than 100 young men wipe the sleep from their eyes and gather in a dark chapel, heads bowed, for an hour of silent prayer.

An Irish monastery, circa 1450 A.D.? No, it’s a typical morning at St. John Vianney Seminary in St. Paul, a four-year college program for men considering the Catholic priesthood.

You’d think the recent bad press about clergy sexual abuse would have slowed the stream of potential priests to a trickle. But SJV, located at the University of St. Thomas, has an entering class of 49 — the largest in 20 years. In fact, SJV has more college seminarians than any other Catholic seminary in the country. Young men flock here from 24 Catholic dioceses, from Alaska to Kentucky. To become priests, they must continue their studies at a graduate seminary after completing SJV’s program.

Has SJV drawn so many young men by loosening its traditional requirements? Quite the opposite.  “We have absolute fidelity to the teachings of the Catholic Church,” according to the Rev. William Baer, the seminary’s rector-president.

It’s in “our approach to the moral life, the way we celebrate mass and our affection for the pope and the Virgin Mary,” he said. “Our appeal is that we offer a vision of life the men can’t find in the larger culture.”

There’s no room at SJV for what some call “the beige church” — the “whatever turns you on” spirituality that became popular in the 1970s and ’80s. In Baer’s view, the recent clergy abuse scandals had their roots, in part, in the freewheeling seminaries of those years.

“Today’s young men won’t give their entire lives for a cynical, watered-down life of church work,” he says.  “Either the priesthood is essential for the salvation of the world, or they’re going to go somewhere else to make a lot more money and have a lot more fun.”

The motto for SJV’s formation program is “boys to men.” That’s in part what attracted senior Andrew Liaugminas, from the Archdiocese of Chicago. “You’re wandering around in the culture, asking ‘What’s going to fulfill me?’ ” he said. “You have no sense there’s anything worth fighting for, nothing beyond the pleasures of the day.”

The Rev. John Klockeman, SJV’s spiritual director, understands this hunger. “Men need a heroic life,” he said. “Our culture wants to replace it with self-indulgence, to rob them of their call to heroism.”  At SJV, young men discern whether the priesthood is for them as they grow in self-knowledge and self-discipline. The model at SJV, says Liaugminas, is “the magnanimous man — the man with a great soul, who’s willing to put up with many hardships to reach his goal.” Liaugminas points to the 12 Apostles, who were willing to go to the death. “We want to be warriors for Christ, who are not afraid to fight for a cause,” he said. “This is the stuff of legends, and it resonates deeply in our hearts here.”

In addition to philosophy and theology, says Baer, SJV stresses behavior that families used to teach, but often don’t today: “Things like be true to your word, apologize when you’ve done wrong, welcome visitors with hospitality.”

The day starts at 6 a.m. with an hour of silent prayer. Mass is next, and then classes at St. Thomas, along with a mandatory two-hour study hall. (More than half the seminarians made the dean’s list last year.) The students also pray together at noon and 6 p.m. On Sunday evening they sing the Salve Regina, a Latin prayer, around an icon of the Virgin Mary and infant Jesus. (“That’s the coolest part,” one seminarian whispered to me.)

SJV’s watchword is accountability. “The era of the Lone Ranger priest with a secret life has got to end,” says Baer. Seminarians meet twice a week in small groups to encourage and support each other. “They take each other to task for things as small as ‘your room is a mess.’ We want them to get used to correcting their brothers.”

Are seminarians intolerably “holier than thou”?

Baer still chuckles about the raucous “half prayer meeting, half pep rally” the seminarians staged after Pope Benedict’s election in April 2005. Campus security guards chased them off a roof, so they led an exuberant procession through the campus, as other students enthusiastically cheered them on.

What about celibacy? “Most of the men have had very active dating lives, and they love the thought of marriage and family,” says Baer. “But they want to give God first shot with their life.”  Liaugminas explains: “If you love something with your whole heart, you want to give yourself fully to that.  It seems daunting when people talk about the prohibition on sex. But I have the chance to be a spiritual father — part of not one family, but thousands of families.”

SJV has candles, icons and stained-glass windows. At the same time, it has rival basketball teams, loud rock music and buoyant energy.

Baer puts it in perspective: “We American Catholics have an image of an aging and dwindling future clergy.  But the men here see a growing and youthful future as priests. That’s due both to our numbers and the dynamic spirit we foster.

“These men believe they’re joining not a sinking ship, but a winning team.”