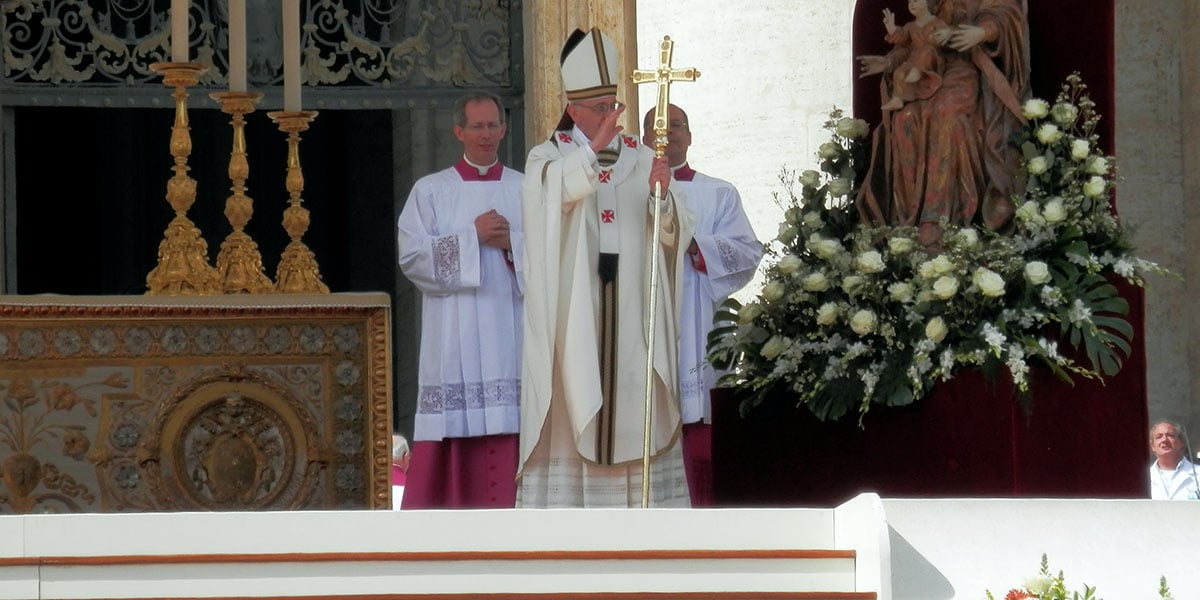 Pope Francis was elected as successor of Peter and bishop of Rome on March 13, 2013.  He chose to be installed on the Solemnity of St. Joseph, March 19 2013.  Thus, his very first homily as Pope was on the role of Saint Joseph as custos or protector.  Here are excerpts from that homily marking the inauguration of his Papal ministry.

Dear Brothers and Sisters, I thank the Lord that I can celebrate this Holy Mass for the inauguration of my Petrine ministry on the solemnity of Saint Joseph, the spouse of the Virgin Mary and the patron of the universal Church. It is a significant coincidence, and it is also the name-day of my venerable predecessor [Josef Ratzinger]: we are close to him with our prayers, full of affection and gratitude.

In the Gospel we heard that “Joseph did as the angel of the Lord commanded him and took Mary as his wife” (Mt 1:24). These words already point to the mission which God entrusts to Joseph: he is to be the custos, the protector. The protector of whom? Of Mary and Jesus; but this protection is then extended to the Church, as Blessed John Paul II pointed out: “Just as Saint Joseph took loving care of Mary and gladly dedicated himself to Jesus Christ’s upbringing, he likewise watches over and protects Christ’s Mystical Body, the Church, of which the Virgin Mary is the exemplar and model” (Redemptoris Custos, 1).

How does Joseph exercise his role as protector? Discreetly, humbly and silently, but with an unfailing presence and utter fidelity, even when he finds it hard to understand. From the time of his betrothal to Mary until the finding of the twelve-year-old Jesus in the Temple of Jerusalem, he is there at every moment with loving care. As the spouse of Mary, he is at her side in good times and bad, on the journey to Bethlehem for the census and in the anxious and joyful hours when she gave birth; amid the drama of the flight into Egypt and during the frantic search for their child in the Temple; and later in the day-to-day life of the home of Nazareth, in the workshop where he taught his trade to Jesus. 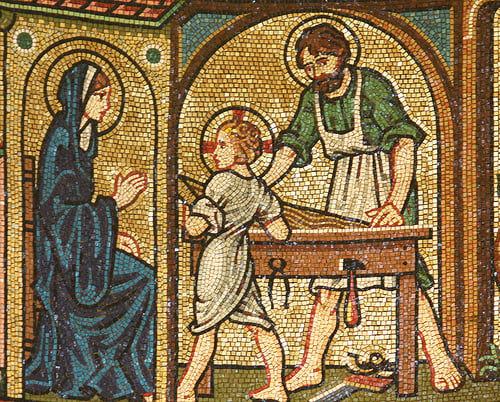 How does Joseph respond to his calling to be the protector of Mary, Jesus and the Church? By being constantly attentive to God, open to the signs of God’s presence and receptive to God’s plans, and not simply to his own. This is what God asked of David, as we heard in the first reading. God does not want a house built by men, but faithfulness to his word, to his plan. It is God himself who builds the house, but from living stones sealed by his Spirit. Joseph is a “protector” because he is able to hear God’s voice and be guided by his will; and for this reason he is all the more sensitive to the persons entrusted to his safekeeping. He can look at things realistically, he is in touch with his surroundings, he can make truly wise decisions. In him, dear friends, we learn how to respond to God’s call, readily and willingly, but we also see the core of the Christian vocation, which is Christ! Let us protect Christ in our lives, so that we can protect others, so that we can protect creation!

The vocation of being a “protector”, however, is not just something involving us Christians alone; it also has a prior dimension which is simply human, involving everyone. It means protecting all creation, the beauty of the created world, as the Book of Genesis tells us and as Saint Francis of Assisi showed us. It means respecting each of God’s creatures and respecting the environment in which we live. It means protecting people, showing loving concern for each and every person, especially children, the elderly, those in need, who are often the last we think about. It means caring for one another in our families: husbands and wives first protect one another, and then, as parents, they care for their children, and children themselves, in time, protect their parents. It means building sincere friendships in which we protect one another in trust, respect, and goodness. In the end, everything has been entrusted to our protection, and all of us are responsible for it. Be protectors of God’s gifts!

Whenever human beings fail to live up to this responsibility, whenever we fail to care for creation and for our brothers and sisters, the way is opened to destruction and hearts are hardened. Tragically, in every period of history there are “Herods” who plot death, wreak havoc, and mar the countenance of men and women.

Please, I would like to ask all those who have positions of responsibility in economic, political and social life, and all men and women of goodwill: let us be “protectors” of creation, protectors of God’s plan inscribed in nature, protectors of one another and of the environment. Let us not allow omens of destruction and death to accompany the advance of this world! But to be “protectors”, we also have to keep watch over ourselves! Let us not forget that hatred, envy and pride defile our lives! Being protectors, then, also means keeping watch over our emotions, over our hearts, because they are the seat of good and evil intentions: intentions that build up and tear down! We must not be afraid of goodness or even tenderness!

Here I would add one more thing: caring, protecting, demands goodness, it calls for a certain tenderness. In the Gospels, Saint Joseph appears as a strong and courageous man, a working man, yet in his heart we see great tenderness, which is not the virtue of the weak but rather a sign of strength of spirit and a capacity for concern, for compassion, for genuine openness to others, for love. We must not be afraid of goodness, of tenderness!

Today, together with the feast of Saint Joseph, we are celebrating the beginning of the ministry of the new Bishop of Rome, the Successor of Peter, which also involves a certain power. Certainly, Jesus Christ conferred power upon Peter, but what sort of power was it? Jesus’ three questions to Peter about love are followed by three commands: feed my lambs, feed my sheep. Let us never forget that authentic power is service, and that the Pope too, when exercising power, must enter ever more fully into that service which has its radiant culmination on the Cross. He must be inspired by the lowly, concrete and faithful service which marked Saint Joseph and, like him, he must open his arms to protect all of God’s people and embrace with tender affection the whole of humanity, especially the poorest, the weakest, the least important, those whom Matthew lists in the final judgment on love: the hungry, the thirsty, the stranger, the naked, the sick and those in prison (cf. Mt 25:31-46). Only those who serve with love are able to protect!

In the second reading, Saint Paul speaks of Abraham, who, “hoping against hope, believed” (Rom 4:18). Hoping against hope! Today too, amid so much darkness, we need to see the light of hope and to be men and women who bring hope to others. To protect creation, to protect every man and every woman, to look upon them with tenderness and love, is to open up a horizon of hope; it is to let a shaft of light break through the heavy clouds; it is to bring the warmth of hope! For believers, for us Christians, like Abraham, like Saint Joseph, the hope that we bring is set against the horizon of God, which has opened up before us in Christ. It is a hope built on the rock which is God.

To protect Jesus with Mary, to protect the whole of creation, to protect each person, especially the poorest, to protect ourselves: this is a service that the Bishop of Rome is called to carry out, yet one to which all of us are called, so that the star of hope will shine brightly. Let us protect with love all that God has given us!

I implore the intercession of the Virgin Mary, Saint Joseph, Saints Peter and Paul, and Saint Francis, that the Holy Spirit may accompany my ministry, and I ask all of you to pray for me! Amen.

Jorge Mario Bergoglio was born on 17 December 1936 in Buenos Aires, Argentina. He holds a degree and worked as a chemical technician but then chose the priesthood and entered the seminary of Villa Devoto. On 11 March 1958 he moved to the novitiate of the Company of Jesus in Chile where he finished studies in the humanities. In 1963, on returning to Buenos Aires, he obtained a degree in philosophy at the St. Joseph major seminary of San Miguel.

Between 1964 and 1965 he taught literature and psychology at the Immacolata College in Santa Fe and then in 1966 he taught the same subjects at the University of El Salvador, in Buenos Aires.  From 1967 to 1970 he studied theology at the St. Joseph major seminary of San Miguel where he obtained a degree. On 13 December 1969 he was ordained a priest. From 1970 to 1971 he completed the third probation at Alcala de Henares, Spain, and on 22 April 1973, pronounced his perpetual vows.

He was novice master at Villa Varilari in San Miguel from 1972 to 1973, where he also taught theology. On 31 July 1973 he was elected as Provincial for Argentina, a role he served as for six years.  From 1980 to 1986 he was rector of the Philosophical and Theological Faculty of San Miguel as well as pastor of the Patriarca San Jose parish in the Diocese of San Miguel. In March of 1986 he went to Germany to finish his doctoral thesis. The superiors then sent him to the University of El Salvador and then to Cordoba where he served as a confessor and spiritual director.

On 20 May 1992, John Paul II appointed him titular Bishop of Auca and Auxiliary of Buenos Aires. He received episcopal consecration in the Cathedral of Buenos Aires from Cardinal Antonio Quarracino, Apostolic Nuncio Ubaldo Calabresi, and Bishop Emilio Ognenovich of Mercedes-Lujan on 27 June of that year.

On 3 June 1997 he was appointed Coadjutor Archbishop of Buenos Aires and succeeded Cardinal Antonio Quarracino on 28 February 1998.  He was Adjunct Relator General of the 10th Ordinary General Assembly of the Synod of Bishops, October 2001.

He served as President of the Bishops’ Conference of Argentina from 8 November 2005 until 8 November 2011.  He was created and proclaimed Cardinal by St. John Paul II in the consistory of 21 February 2001, of the Title of S. Roberto Bellarmino (St. Robert Bellarmine).

He was a member of:  the Congregations for Divine Worship and Discipline of the Sacraments; for the Clergy; and for Institutes of Consecrated Life and Societies of Apostolic Life; the Pontifical Council for the Family; and the Pontifical Commission for Latin America.