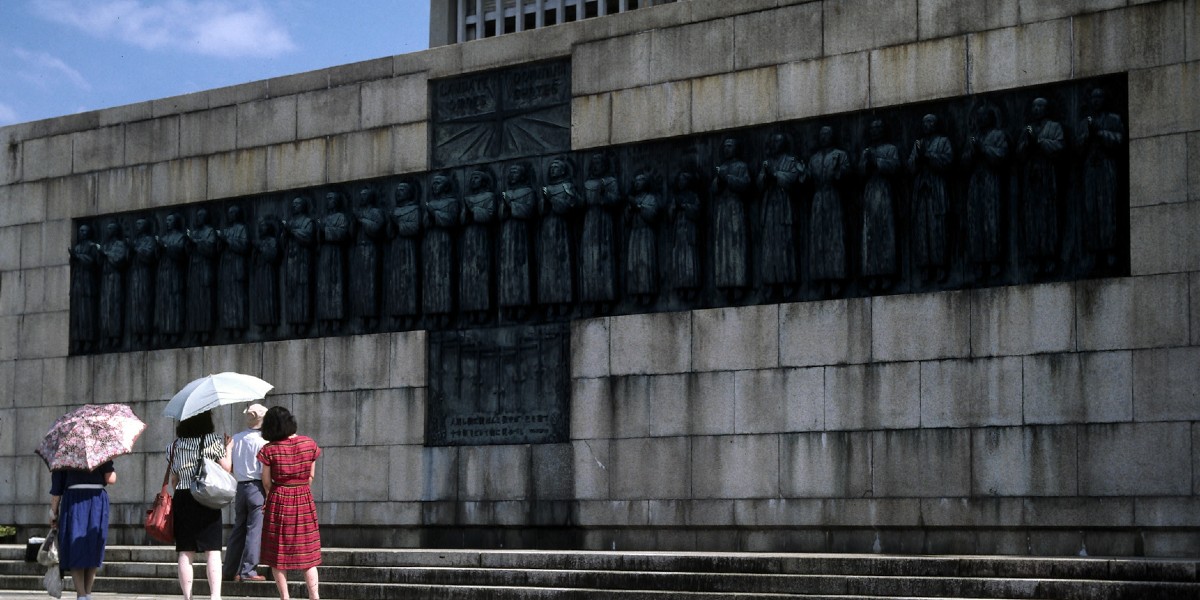 Saint Paul Miki was born in Japan around 1566. He entered the Society of Jesus (Jesuits), and successfully preached the gospel to the Japanese people.  When persecution broke out, he was arrested along with 25 other Catholics. After enduring torment and ridicule, Paul Miki and his companions were taken to Nagasaki where they suffered crucifixion in 1597 on the evening of February 5. Their feast day in the Roman calendar is on Feb. 6. The following account of their martyrdom was written down by an anonymous eye-witness.

The crosses were set in place. Father Pasio and Father Rodriguez took turns encouraging the victims. Their steadfast behavior was wonderful to see. The Father Bursar stood motionless, his eyes turned heavenward. Brother Martin gave thanks to God’s goodness by singing psalms. Again and again he repeated: “Into your hands, Lord, I entrust my life”. Brother Francis Branco also thanked God in a loud voice. Brother Gonsalvo in a very loud voice kept saying the Our Father and Hail Mary.

Our brother, Paul Miki, saw himself standing now in the noblest pulpit he had ever filled. To his “congregation” he began by proclaiming himself a Japanese and a Jesuit. He was dying for the Gospel he preached. He gave thanks to God for this wonderful blessing and he ended his “sermon” with these words: “As I come to this supreme moment of my life, I am sure none of you would suppose I want to deceive you. And so I tell you plainly: there is no way to be saved except the Christian way. My religion teaches me to pardon my enemies and all who have offended me. I do gladly pardon the Emperor and all who have sought my death. I beg them to seek baptism and be Christians themselves”.

Then he looked at his comrades and began to encourage them in their final struggle. Joy glowed in all their faces, and in Louis’ most of all. When a Christian in the crowd cried out to him that he would soon be in heaven, his hands, his whole body strained upward with such joy that every eye was fixed on him.

Anthony, hanging at Louis’ side, looked toward heaven and called upon the holy names – “Jesus, Mary!” He began to sing a psalm: “Praise the Lord, you children!” (He learned it in catechism class in Nagasaki. They take care there to teach the children some psalms to help them learn their catechism).

Others kept repeating “Jesus, Mary!” Their faces were serene. Some of them even took to urging the people standing by to live worthy Christian lives. In these and other ways they showed their readiness to die.

Then, according to Japanese custom, the four executioners began to unsheathe their spears. At this dreadful sight, all the Christians cried out, “Jesus, Mary!” And the storm of anguished weeping then rose to batter the very skies. The executioners killed them one by one. One thrust of the spear, then a second blow. It was over in a very short time.