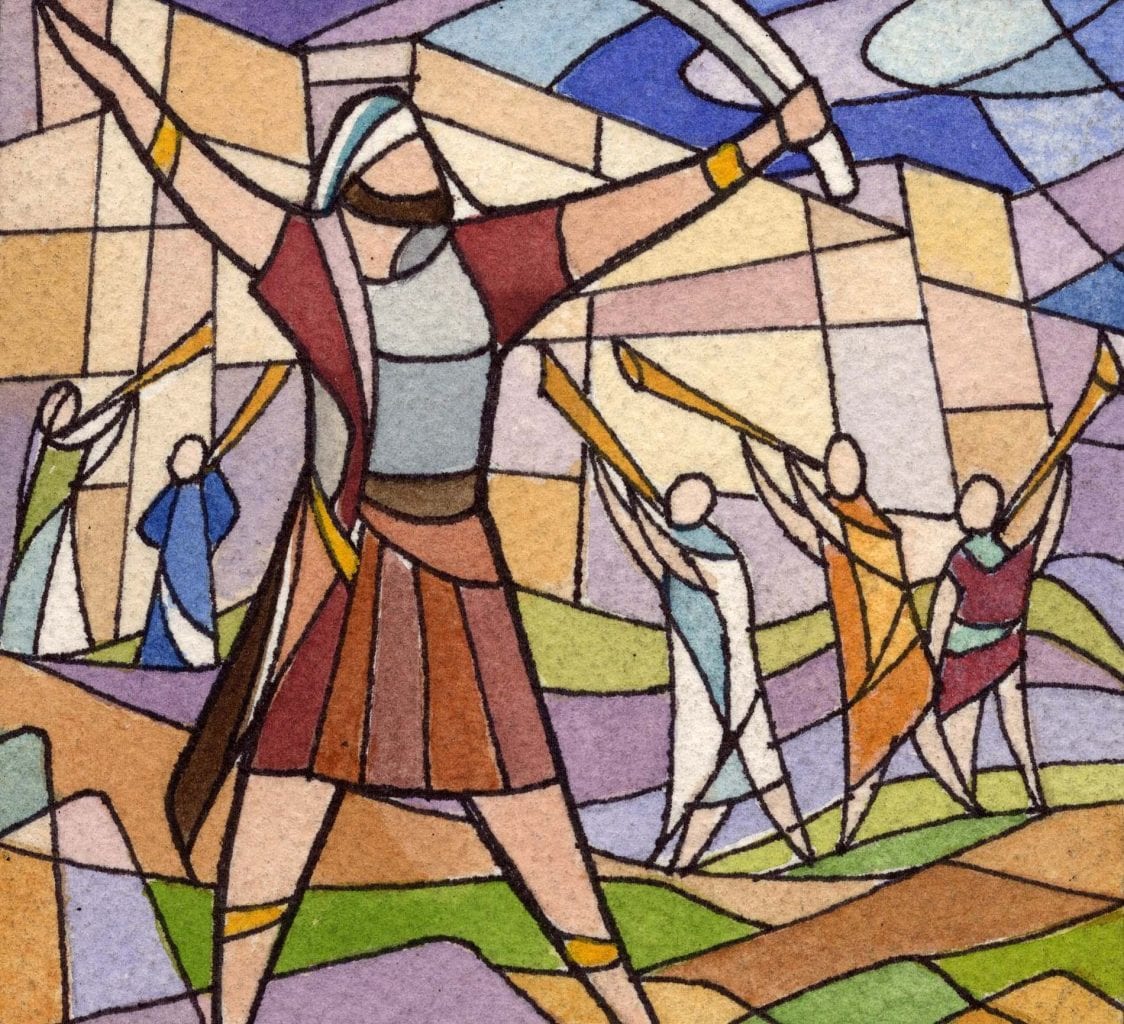 Origen, one of the greatest Scripture Scholars and preachers of the early Church, was renowned for his Spiritual or symbolic interpretation of Scripture.  In the Old Testament people, events and institutions, he saw figures or foreshadowings of future New Testament realities.   Origen sees the fall of Jericho as prefiguraing the End of the world, the trumpets of the Israelites as foreshadowing the last trumpet of the angels, Rahab the harlot and the scarlet cord prefiguring the Church, saved by the blood of Christ.

Once Jericho was surrounded it had to be stormed. How then was Jericho stormed? No sword was drawn against it, not battering ram was aimed at it, no javelins were hurled. The priest merely sounded their trumpets, and the walls of Jericho collapsed.

In the Scriptures Jericho is often represented as an image of the world. There can be not doubt that the man whom the Gospel describes as going down from Jerusalem to Jericho and falling into the hands of brigands is an image of Adam being driven out of paradise into the exile of this world. Likewise the blind men in Jericho, to whom Jesus came to give sight, signified the people in this world who were blinded by ignorance, to whom the son of God came.

Jericho will fall, then; this world will perish. Indeed in the sacred books the end of the world was proclaimed long ago.

The Sound of Trumpets

How will the world be brought to an end, and by what means will it be destroyed? The answer of Scripture is: By the sound of trumpets. If you ask what trumpets, then let Paul reveal the secret. Listen to what he says: The trumpet will sound, and the dead who are in Christ will rise incorruptible. The voice of the archangel and the trumpets of God will give the signal, and the Lord himself will come down from heaven. Then the Lord Jesus will conquer Jericho with trumpets and destroy it, saving only the harlot and her household. 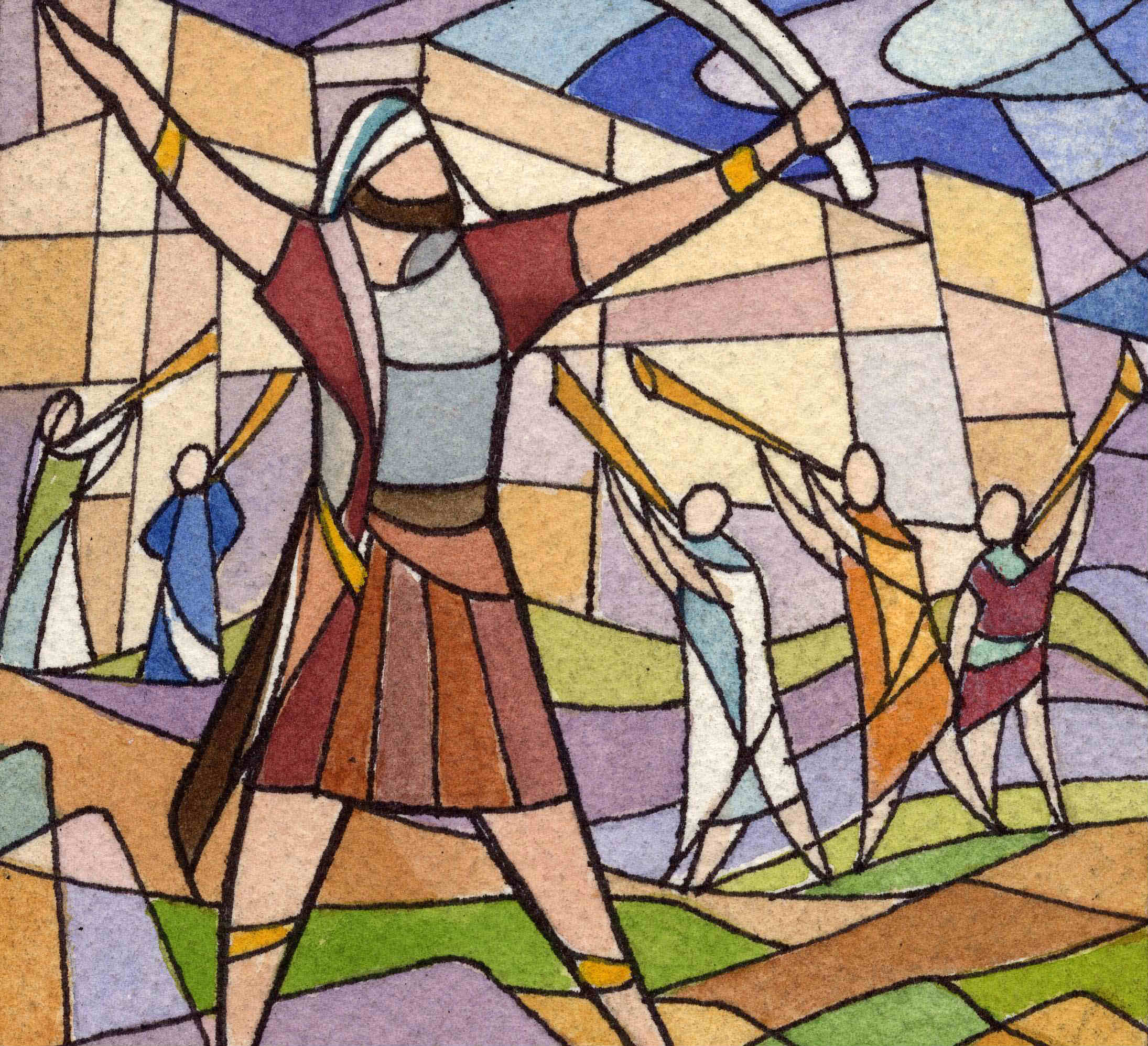 Jesus our Lord will come says Paul, and he will come with the sound of trumpets.

Rahab the Harlot & the Scarlet Cord

He will save only the woman who received his spies, that is, his apostles, in faith and obedience, and hid them on the roof of her house; and he will join this harlot to the house of Israel. But let us not bring up her past sins again or impute them to her. She was a harlot once, but now she is joined to Christ, chaste virgin to one chaste husband. Listen to what the Apostle say of her: He has determined to present you to Christ as a chaste virgin to her one and only husband. Indeed, Paul himself had been born of her: Misled by our folly and disbelief, he said, we too were once slaves to our passions and to pleasures of every kind.

If you wish to learn more fully about how this harlot ceased to be a harlot then listen to Paul once again: And such were you also, but you have been cleansed and made holy in the name of our Lord Jesus Christ and in the Spirit of our God. To assure her escape when Jericho was destroyed, the harlot was given that most effective symbol of salvation, the scarlet cord. For it is by the blood of Christ that the entire Church is saved, in the same Jesus Christ our Lord, to whom belongs glory and dominion for ever and ever. Amen.

This excerpt from Origen’s homilies on the book of Joshua treats of the fall Jericho’s walls and the trumpets as prefiguring the end of the world and Rahab the harlot and her scarlet cord prefiguring the Church saved by the blood of Christ. (Hom. 6. 4: PG 12, 855-856).  It is used in the Roman Catholic Office of Readings for Thursday of the 10th week in ordinary time with the accompanying biblical text taken from Joshua 5:13-6:21.

Origen
Origen, born into a Christian family from Alexandria Egypt around 185AD, was only a teenager when he witnessed his father, Leonidas, dragged from his home by Roman soldiers and ultimately martyred. He was inspired by his father’s heroic example to dedicate himself to a strict life of prayer, fasting and study. The bishop of Alexandria, Demetrius, recognized the talent and holiness of this young man and named him head of the catechetical school of this great center of early Christianity. Origen ultimately became one of the greatest Scripture scholars and preachers of the early Church. Though he began his teaching ministry as a lay catechist, Origen was ultimately ordained a priest and wrote commentaries and homilies that influenced subsequent Early Church Fathers from both East and West. Though he did not receive the grace of martyrdom, Origen was imprisoned and brutally tortured for his faith during the persecution that took place under the emperor Decius. Weakened by his ordeal, he died a few years later in 254 AD. Though several of Origen’s teachings were condemned after his death by Church authorities, it must be remembered that his erroneous opinions were expressed in matters that had not yet been defined by official Church teaching. In his lifetime, Origen was always a loyal son of the Church whose correct opinions far outnumbered his errors. Origen’s writings were profuse indeed, though only a limited number survive. He wrote commentaries on almost every book of the Bible, with his treatise on Song of Songs, Romans, and many homilies on the Pentateuch (the first five books of the Old Testament) surviving either intact or in large portions. He was the author of one of the earliest attempts at textual criticism of the Old Testament, the Hexapla, and was responsible for the first attempt at systematic theology in his famous De Principiis (On First Principles). His two works of spiritual theology, Exhortation to Martyrdom and On Prayer were widely read in the Early Church and are still read today, with many excerpts used in the Roman Office of Readings.  For more on Origen, see When the Church was Young: Voices of the Early Fathers.  (bio by Dr. Italy)