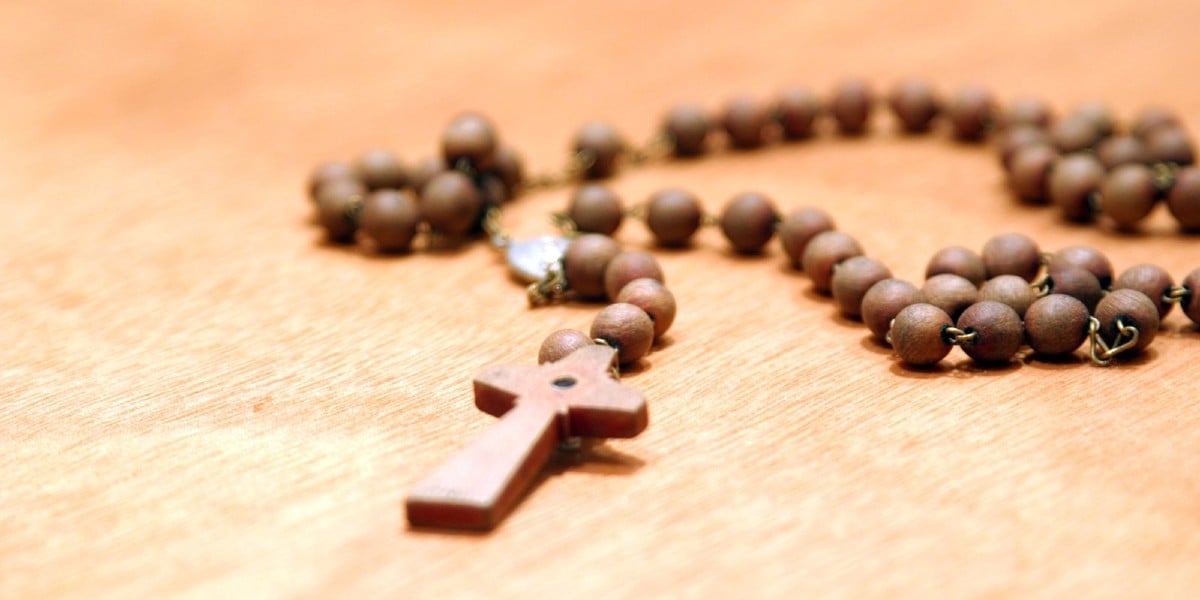 Meditate on the Mysteries of the Rosary – Bernard of Clairvaux

St. Bernard of Clairvaux here helps us meditate on the mysteries that are the heartbeat of the rosary.  The celebration of the feast of Our Lady of the Rosary on October 7  invites all to meditate upon the mysteries of Christ, following the example of the Blessed Virgin Mary who was so singularly associated with the incarnation, passion and glorious resurrection of the Son of God, as well as with many of the events in his public ministry which we now meditate upon in the luminous mysteries added by Pope John Paul II.

The child to be born of you will be called holy, the Son of God, the fountain of wisdom, the Word of the Father on high. Through you, blessed Virgin, this Word will become flesh, so that even though, as he says: I am in the Father and the Father is in me, it is still true for him to say: “I came forth from God and am here”.

In the beginning was the Word. The spring was gushing forth, yet still within himself. Indeed, the Word was with God, truly dwelling in inaccessible light. And the Lord said from the beginning: I think thoughts of peace and not of affliction. Yet your thought was locked within you, and whatever you thought, we did not know; for who knew the mind of the Lord, or who was his counselor?

And so the idea of peace came down to do the work of peace: The Word was made flesh and even now dwells among us. It is by faith that he dwells in our hearts, in our memory, our intellect and penetrates even into our imagination. What concept could man have of God if he did not first fashion an image of him in his heart? By nature incomprehensible and inaccessible, he was invisible and unthinkable, but now he wished to be understood, to be seen and thought of.

But how, you ask, was this done? He lay in a manger and rested on a virgin’s breast, preached on a mountain, and spent the night in prayer. He hung on a cross, grew pale in death, and roamed free among the dead and ruled over those in hell. He rose again on the third day, and showed the apostles the wounds of the nails, the signs of victory; and finally in their presence he ascended to the sanctuary of heaven.

How can we not contemplate this story in truth, piety and holiness? Whatever of all this I consider, it is God I am considering; in all this he is my God. I have said it is wise to meditate on these truths, and I have thought it right to recall the abundant sweetness, given by the fruits of this priestly root; and Mary, drawing abundantly from heaven, has caused this sweetness to overflow for us.

To learn more about the Rosary, listen to Dr. Italy’s brief podcast UNLOCKING THE POWER OF THE ROSARY.

This excerpt on meditation on the mysteries of the rosary comes from a homily by Saint Bernard of Clairvaux (Sermo de Aquaeductu: Opera Omnia, Edit. Cisterc. 5 {1968, 282-283).  It appears in the Roman Catholic Office of Readings for the Feast of Our Lady of the Rosary on October 7. This commemorative feast was established by Pope Saint Pius V on the anniversary of the naval victory won by the Christian fleet over the Turks at Lepanto in the late 16th century. The victory was attributed to the help of the holy Mother of God whose aid was invoked through praying the rosary.

St. Bernard of Clairvaux is clearly one of the greatest preachers of all time. Born to a noble family near Dijon France in 1090 AD, St. Bernard was inspired by the example of a new religious congregation, the Cistercians, who had abandoned the relative ease and security of Benedictine monasticism of that day to live according to the primitive pattern of St. Benedict through hard manual labor, solitude, and rigorous prayer. When St. Bernard decided to abandon the privilege of noble life to enter the monastery, he brought over 30 noble relatives with him. Once professed, he was very soon made abbot and went on to found over 40 monasteries in his lifetime. St. Bernard’s magnetic preaching and exemplary character changed the lives of thousands and his writing continues today to inspire Christians everywhere. His words were so sweet that he came to be known as the Melifluous (“full of honey”) Doctor. St. Bernard died in 1153 and was later proclaimed a saint and a Doctor of the Church. His feast day in the Roman Calendar is August 20. Biography by Dr. Italy