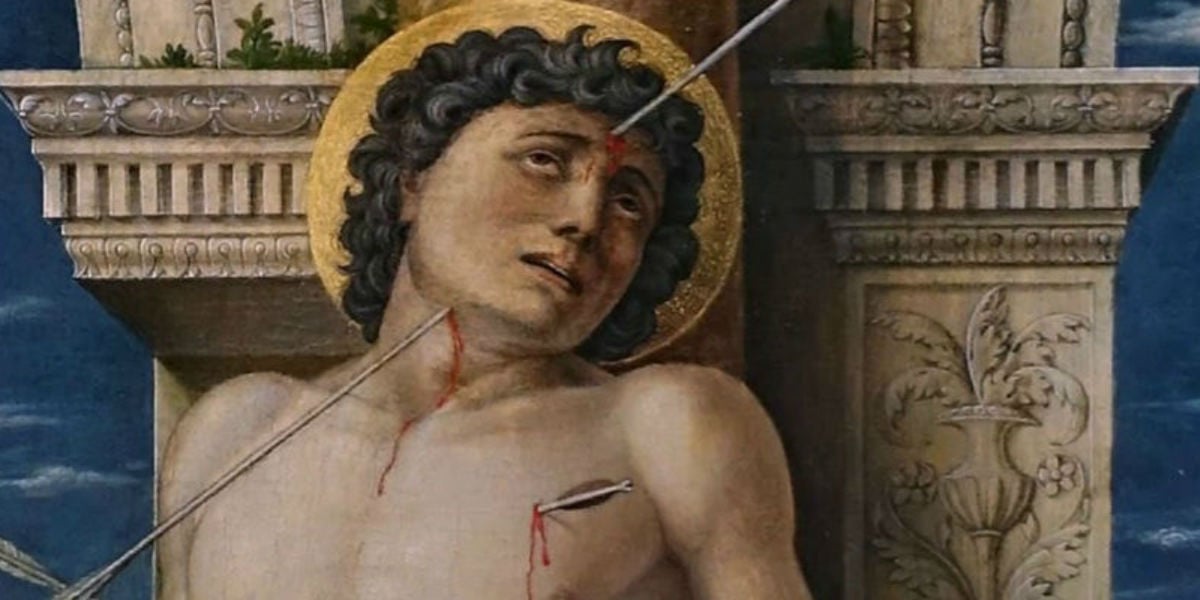 St. Sebastian is is often depicted as tied to a tree and pierced by many arrows.  Ambrose says Sebastian was from Milan and was venerated there during Ambrose’s episcopate in the latter part of the 4th century.  It appears Sebastian died in the great persecution of Diocletian between AD 303 and 312.  His feast is on January 20.

Take the example of the martyr Sebastian, whose birthday in glory we celebrate today. He was a native of Milan. At a time when persecution either had ceased or had not yet begun or was of a milder kind, he realized that there was only slight, if any, opportunity for suffering. He set out for Rome, where bitter persecutions were raging because of the fervor of the Christians. There he endured suffering; there he gained his crown. he went to the city as a stranger and there established a home of undying glory. If there had been only one persecutor, he would not have gained a martyr’s crown.

The persecutors who are visible are not the only ones. There are also invisible persecutors, much greater in number. This is more serious. Like a king bent on persecution, sending orders to persecute to his many agents, and establishing different persecutors in each city or province, the devil directs his many servants in their work of persecution, whether in public or in the souls of individuals.

Of this kind of persecution Scripture says: All who wish to live a holy life in Christ Jesus suffer persecution. “All” sufffer persecution; there is no exception. Who can claim exemption if the Lord himself endured the testing of persecution? How many there are today who are secret martyrs for Christ, giving testimony to Jesus as Lord! The Apostle knew this kind of martyrdom, this faithful witnessing to Christ; he said: This is our boast, the testimony of our conscience.

This excerpt from Ambrose’s exposition of psalm 118 (Cap. 20, 43-45, 48; CSEL 62, 466-468) in the late 4th century is the earliest reference we have to the martyrdom of St. Sebastian.  Sebastian was honored by a memorial day in the calendar of the Church of Milan in Ambrose’s time (late fourth century).  It appears in the office of readings for the Memorial of St. Sebastian on January 20.

For more great resources on Christian Martyrdom and Martyrs, see the SAINTS & MARTYRS SECTION of the Crossroads Initiative Library.

Banner/featured image of the martyrdom of Saint Sebastian by Andrea Mantegna. Public domain.

St. Ambrose of Milan’s life (Sant Ambroggio de Milano in Italian) is a particularly fascinating story. St. Ambrose was born around AD 339 in what is now Trier, Germany, the son of the Roman prefect of Gaul. Following his father’s footsteps, Ambrose embarked upon a career in law and politics and by 370, he had become the Imperial governor of Northern Italy.

When the episcopal see of Milan became vacant in 374, the people demanded that Ambrose be made their bishop. The neighboring bishops and the Emperor convinced him to accept this call as the will of God, and so the catechumen Ambrose was baptized and ordained deacon, then priest, then bishop, all in a single week!  This politician-turned churchman was profoundly aware of his lack of preparation for this great responsibility and so set himself immediately to prayer and the study of Scripture. His deep spirituality and love of God’s Word married together with the oratorical skill acquired in law and politics made Ambrose one of the greatest preachers of the early church.

St. Ambrose proved to be a fierce opponent of heresy, paganism, and hypocrisy. He battled to preserve the independence of the Church from the state and courageously excommunicated the powerful Catholic Emperor Theodosius I for a massacre of innocent civilians in Thessalonica.  Ambrose also had a significant impact on sacred music through the composition of hymns and psalm tones that are known to this day as Ambrosian chant. Besides numerous sermons and treatises on the spiritual life, Saint Ambrose is responsible for two of the first great theological works written in Latin, De Sacramentis on the Sacraments and De Spiritu Sancto on the Holy Spirit.

Around 385, an ambitious professor of public speaking named Augustine came to hear Saint Ambrose preach in order to study his technique, and in the process, was attracted to the Catholic faith. In 386 Augustine was baptized by Ambrose and went on to become bishop of Hippo in North Africa. Ambrose and his pupil, Augustine, together with St. Jerome and St. Gregory the Great, make up the four original Doctors of the Latin Church. Saint Ambrose, one of the most important of the Early Church Fathers, died on Holy Saturday (April 4) in the year 397. His feast day in the Roman calendar is December 7, the day he was ordained bishop. From the Roman liturgy for the Feast of St. Ambrose: “Lord, you made Saint Ambrose an outstanding teacher of the Catholic faith and gave him the courage of an apostle. Raise up in your Church more leaders after your own heart, to guide us with courage and wisdom. We ask this through our Lord Jesus Christ, your Son, who lives and reigns with you and the Holy Spirit, one God forever and ever. Amen.”  Biography by Dr. Italy For more on St. Ambrose and other Early Church Fathers, see When the Church was Young: Voices of the Early Fathers by Marcellino D’Ambrosio.