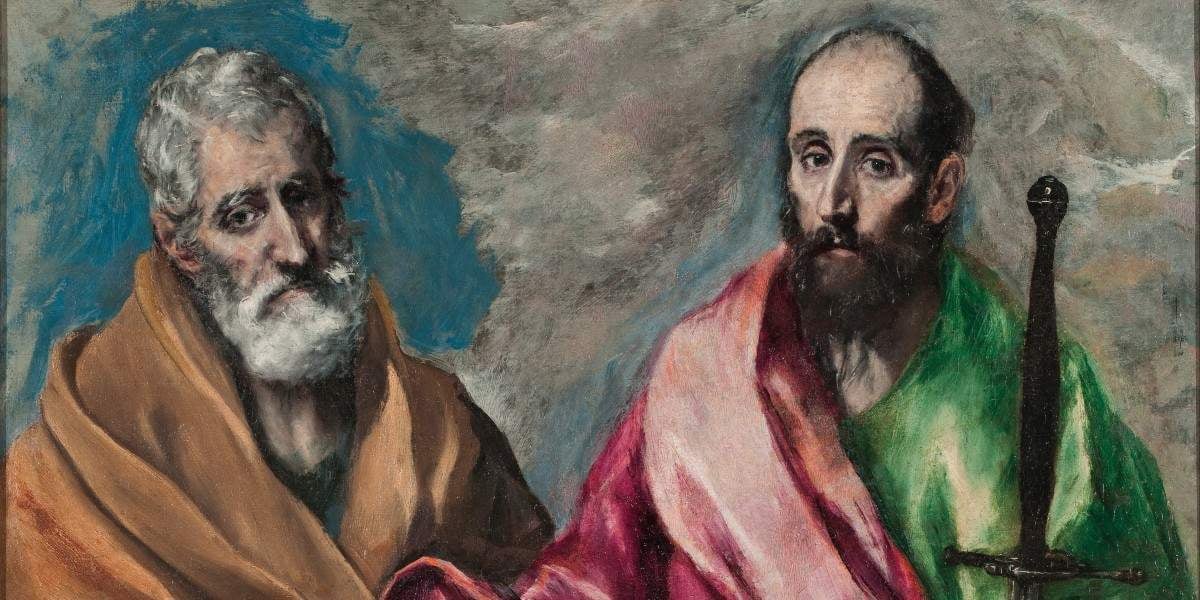 Peter & Paul have a common feast day.  St. Leo, 5th century bishop of Rome, shows that this is because these apostles were united not only in faith, but shared a common martyrdom.

Precious in the eyes of the Lord is the death of his holy ones. No type of cruelty can tear down the religion established by the mystery of Christ’s cross. The Church is not diminished by persecutions, but rather increased. The field of the Lord is always being enriched with a more abundant harvest, while the seeds which are sown one by one yield a manifold return.

From this field those two famous shoots of the divine seed burst forth into a great progeny, witnessed by thousands of blessed martyrs. To emulate the apostles’ triumph, these martyrs have adorned our city far and wide with people clothed in purple and shining brilliantly, and they have crowned it with a diadem fashioned by the glory of many precious stones. 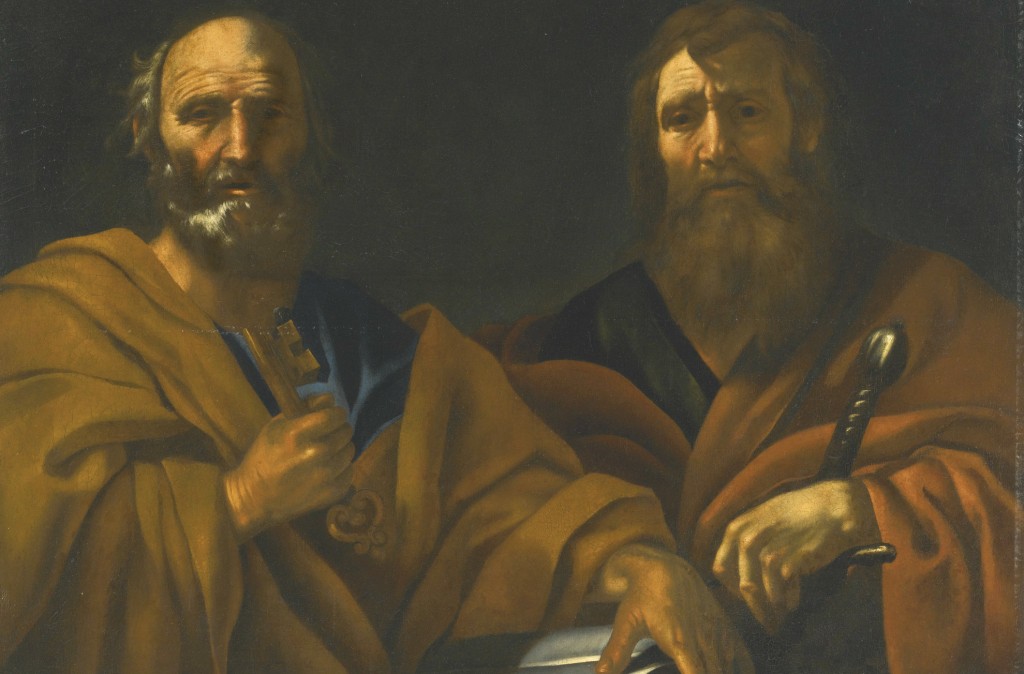 Image is Saints Peter and Paul circa 1620 by Anonymous (Roman School). Public domain.

On the commemoration of all the saints it is right for us to rejoice in this heavenly band, fashioned by God as models of patience and a support for our faith; but we must glory and exult even more in the eminence of these two forebears, whom the grace of God raised to so high a summit among all the members of the Church, and established like two eyes that bring light to the body whose head is Christ.

As to their merits and virtues, which no words can describe, we should not think of any difference or distinction between them; their calling was the same, their labors were similar, theirs was a common death.

Our experience has shown, as our predecessors have proved, that we may believe and hope that in all the labors of the present life, by the mercy of God, we shall always be helped by the prayers of our special patrons. Just as we are humbled by our own sins, so we shall be raised up by the merits of these apostles.

This excerpt from a sermon of St. Leo the Great (Sermo 82, in natali apostolorum Petri et Pauli 1, 6-7: PL 54, 426-428) is used in the Roman Office of Readings for November 18, the memorial of the Dedication of the Basilicas of St. Paul Outside the Walls and St. Peter’s in Vatican City.

It is regrettable that so little is known about the early life of this man who proved to be such an extraordinary shepherd of the Catholic Church that he came to be known not only as Pope Saint Leo I, but also is one of the only two Popes in two thousand years to be called “the Great.”  What we do know is that as a deacon of the Roman Church, before being elevated to the office of Pope in 440 AD, St. Leo the Great had opposed the heresy of Pelagianism which taught that grace was not necessary for salvation, but was rather a bonus that God granted to those who earned it by their good works.  As Pope, St. Leo the Great was forceful and unambiguous in his Christological teaching which affirmed the full divinity and humanity of Christ.  In fact his most famous writing, commonly known as the Tome of St. Leo (449), was the basis of the Council of Chalcedon’s (451) dogmatic definition of Christ as one Divine Person possessing two complete natures, human and divine.

St. Leo the Great was Pope during the middle of the fifth century, a troubled time when barbarian armies were ravaging the once mighty Roman Empire.  For all intents and purposes, the Western Empire was in total political and military collapse and there was a vacuum of political leadership.  Pope St. Leo filled the void and became the advocate for the temporal as well as spiritual needs of his flock.  He is perhaps most famous for persuading Attila the Hun to abandon his plans to sack the city of Rome and to withdraw his forces beyond the Danube river (452).  St. Leo once again was the spokesperson for the Roman citizenry in 455 when the Vandal barbarians swept into Central Italy, securing concessions from them.

Through both his powerful teaching and his leadership, Pope St. Leo the Great very much strengthened the office of the Papacy and made a strong biblical case for the Divine institution of this ministry by examining the biblical evidence for Peter’s unique role among the apostles.

The writings that survive by St. Leo, besides his famous Tome, consist of 143 letters and 96 sermons.  His sermons cover every season of the liturgical year and are indeed a treasure.  Excerpts from these letters and sermons are included below to you a taste of this man’s clear and vigorous way of preaching and teaching the faith passed down from the apostles.  St. Leo the Great died in 461, is regarded as one of the most important of the Western Fathers of the Church and was declared a“Doctor of the Church” by Pope Benedict XIV. (bio by Dr. Italy)