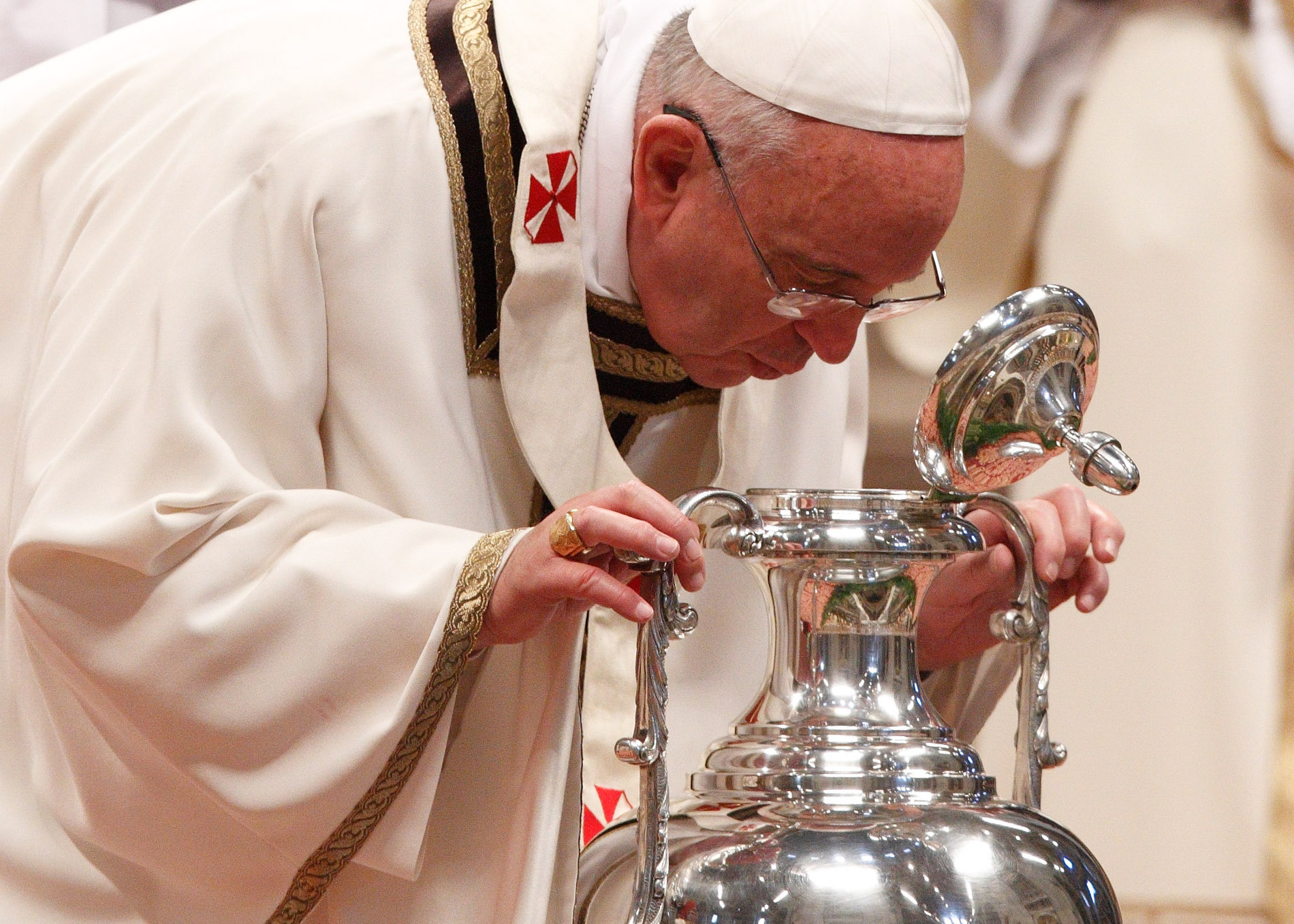 This morning I have the joy of celebrating my first Chrism Mass as the Bishop of Rome. I greet all of you with affection, especially you, dear priests, who, like myself, today recall the day of your ordination.

The readings and the Psalm of our Mass speak of God’s “anointed ones”: the suffering Servant of Isaiah, King David and Jesus our Lord. All three have this in common: the anointing that they receive is meant in turn to anoint God’s faithful people, whose servants they are; they are anointed for the poor, for prisoners, for the oppressed… A fine image of this “being for” others can be found in the Psalm 133: “It is like the precious oil upon the head, running down upon the beard, on the beard of Aaron, running down upon the collar of his robe” (v. 2). The image of spreading oil, flowing down from the beard of Aaron upon the collar of his sacred robe, is an image of the priestly anointing which, through Christ, the Anointed One, reaches the ends of the earth, represented by the robe.

The sacred robes of the High Priest are rich in symbolism. One such symbol is that the names of the children of Israel were engraved on the onyx stones mounted on the shoulder-pieces of the ephod, the ancestor of our present-day chasuble: six on the stone of the right shoulder-piece and six on that of the left (cf. Ex 28:6-14). The names of the twelve tribes of Israel were also engraved on the breastplate (cf. Es 28:21). This means that the priest celebrates by carrying on his shoulders the people entrusted to his care and bearing their names written in his heart. When we put on our simple chasuble, it might well make us feel, upon our shoulders and in our hearts, the burdens and the faces of our faithful people, our saints and martyrs who are numerous in these times.

From the beauty of all these liturgical things, which is not so much about trappings and fine fabrics than about the glory of our God resplendent in his people, alive and strengthened, we turn now to a consideration of activity, action. The precious oil which anoints the head of Aaron does more than simply lend fragrance to his person; it overflows down to “the edges”. The Lord will say this clearly: his anointing is meant for the poor, prisoners and the sick, for those who are sorrowing and alone. My dear brothers, the ointment is not intended just to make us fragrant, much less to be kept in a jar, for then it would become rancid … and the heart bitter.

A good priest can be recognized by the way his people are anointed: this is a clear proof. When our people are anointed with the oil of gladness, it is obvious: for example, when they leave Mass looking as if they have heard good news. Our people like to hear the Gospel preached with “unction”, they like it when the Gospel we preach touches their daily lives, when it runs down like the oil of Aaron to the edges of reality, when it brings light to moments of extreme darkness, to the “outskirts” where people of faith are most exposed to the onslaught of those who want to tear down their faith. People thank us because they feel that we have prayed over the realities of their everyday lives, their troubles, their joys, their burdens and their hopes. And when they feel that the fragrance of the Anointed One, of Christ, has come to them through us, they feel encouraged to entrust to us everything they want to bring before the Lord: “Pray for me, Father, because I have this problem”, “Bless me Father”, “Pray for me” – these words are the sign that the anointing has flowed down to the edges of the robe, for it has turned into a prayer of supplication, the supplication of the People of God. When we have this relationship with God and with his people, and grace passes through us, then we are priests, mediators between God and men. What I want to emphasize is that we need constantly to stir up God’s grace and perceive in every request, even those requests that are inconvenient and at times purely material or downright banal – but only apparently so – the desire of our people to be anointed with fragrant oil, since they know that we have it. To perceive and to sense, even as the Lord sensed the hope-filled anguish of the woman suffering from hemorrhages when she touched the hem of his garment. At that moment, Jesus, surrounded by people on every side, embodies all the beauty of Aaron vested in priestly raiment, with the oil running down upon his robes. It is a hidden beauty, one which shines forth only for those faith-filled eyes of the woman troubled with an issue of blood. But not even the disciples – future priests – see or understand: on the “existential outskirts”, they see only what is on the surface: the crowd pressing in on Jesus from all sides (cf. Lk 8:42). The Lord, on the other hand, feels the power of the divine anointing which runs down to the edge of his cloak. 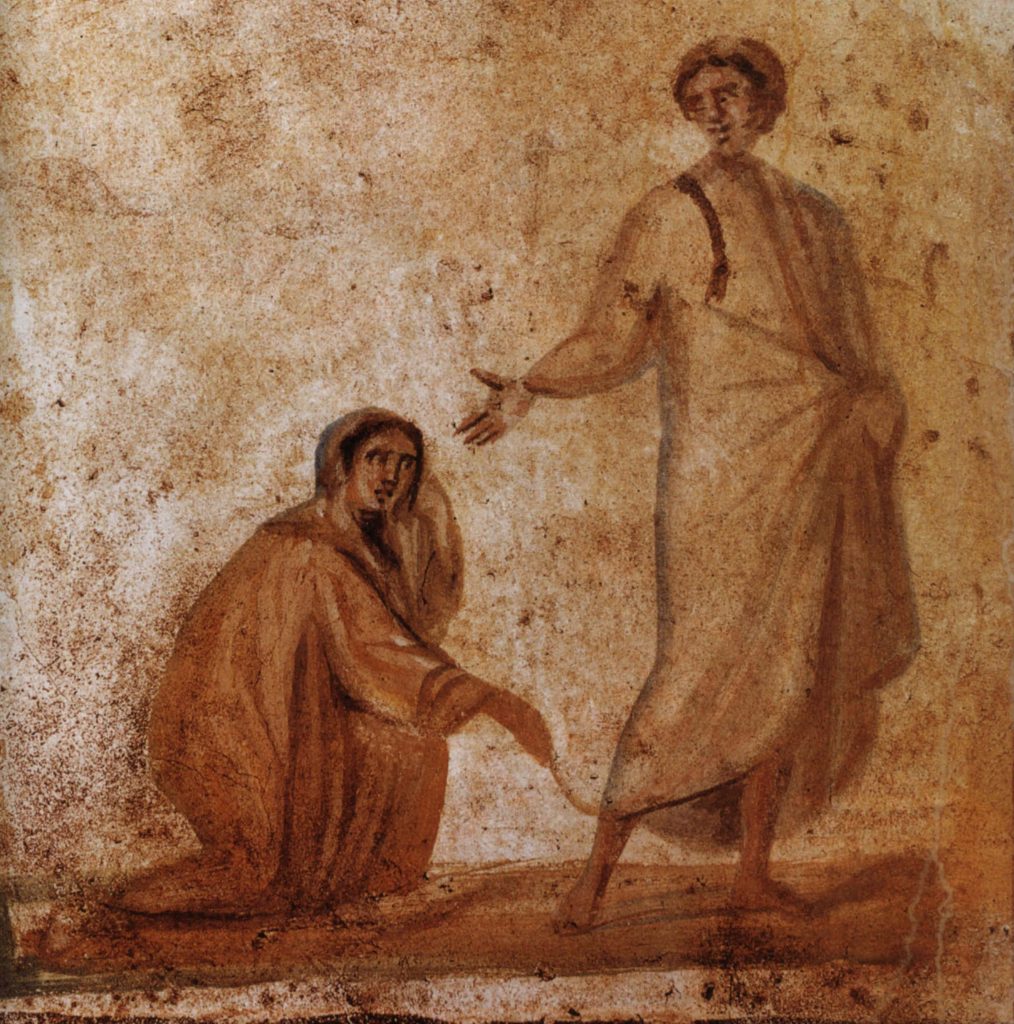 We need to “go out”, then, in order to experience our own anointing, its power and its redemptive efficacy: to the “outskirts” where there is suffering, bloodshed, blindness that longs for sight, and prisoners in thrall to many evil masters. It is not in soul-searching or constant introspection that we encounter the Lord: self-help courses can be useful in life, but to live our priestly life going from one course to another, from one method to another, leads us to become pelagians and to minimize the power of grace, which comes alive and flourishes to the extent that we, in faith, go out and give ourselves and the Gospel to others, giving what little ointment we have to those who have nothing, nothing at all.

The priest who seldom goes out of himself, who anoints little – I won’t say “not at all” because, thank God, the people take the oil from us anyway – misses out on the best of our people, on what can stir the depths of his priestly heart. Those who do not go out of themselves, instead of being mediators, gradually become intermediaries, managers. We know the difference: the intermediary, the manager, “has already received his reward”, and since he doesn’t put his own skin and his own heart on the line, he never hears a warm, heartfelt word of thanks. This is precisely the reason for the dissatisfaction of some, who end up sad – sad priests – in some sense becoming collectors of antiques or novelties, instead of being shepherds living with “the odour of the sheep”. This I ask you: be shepherds, with the “odour of the sheep”, make it real, as shepherds among your flock, fishers of men. True enough, the so-called crisis of priestly identity threatens us all and adds to the broader cultural crisis; but if we can resist its onslaught, we will be able to put out in the name of the Lord and cast our nets. It is not a bad thing that reality itself forces us to “put out into the deep”, where what we are by grace is clearly seen as pure grace, out into the deep of the contemporary world, where the only thing that counts is “unction” – not function – and the nets which overflow with fish are those cast solely in the name of the One in whom we have put our trust: Jesus.

Dear lay faithful, be close to your priests with affection and with your prayers, that they may always be shepherds according to God’s heart.

Dear priests, may God the Father renew in us the Spirit of holiness with whom we have been anointed. May he renew his Spirit in our hearts, that this anointing may spread to everyone, even to those “outskirts” where our faithful people most look for it and most appreciate it. May our people sense that we are the Lord’s disciples; may they feel that their names are written upon our priestly vestments and that we seek no other identity; and may they receive through our words and deeds the oil of gladness.

Cardinal Jorge Mario Bergoglio, S.J., Archbishop of Buenos Aires, Argentina, Ordinary for Eastern-rite faithful in Argentina who lack an Ordinary of their own rite, was born on 17 December 1936 in Buenos Aires. He studied as and holds a degree as a chemical technician, but then chose the priesthood and entered the seminary of Villa Devoto. On 11 March 1958 he moved to the novitiate of the Company of Jesus where he finished studies in the humanities in Chile. In 1963, on returning to Buenos Aires, he obtained a degree in philosophy at the St. Joseph major seminary of San Miguel.

Between 1964 and 1965 he taught literature and psychology at the Immacolata College in Santa Fe and then in 1966 he taught the same subjects at the University of El Salvador, in Buenos Aires.

From 1967 to 1970 he studied theology at the St. Joseph major seminary of San Miguel where he obtained a degree. On 13 December 1969 he was ordained a priest. From 1970 to 1971 he completed the third probation at Alcala de Henares, Spain, and on 22 April 1973, pronounced his perpetual vows.

He was novice master at Villa Varilari in San Miguel from 1972 to 1973, where he also taught theology. On 31 July 1973 he was elected as Provincial for Argentina, a role he served as for six years.

From 1980 to 1986 he was rector of the Philosophical and Theological Faculty of San Miguel as well as pastor of the Patriarca San Jose parish in the Diocese of San Miguel. In March of 1986 he went to Germany to finish his doctoral thesis. The superiors then sent him to the University of El Salvador and then to Cordoba where he served as a confessor and spiritual director.

On 20 May 1992, John Paul II appointed him titular Bishop of Auca and Auxiliary of Buenos Aires. He received episcopal consecration in the Cathedral of Buenos Aires from Cardinal Antonio Quarracino, Apostolic Nuncio Ubaldo Calabresi, and Bishop Emilio Ognenovich of Mercedes-Lujan on 27 June of that year.

On 3 June 1997 he was appointed Coadjutor Archbishop of Buenos Aires and succeeded Cardinal Antonio Quarracino on 28 February 1998.

He was Adjunct Relator General of the 10th Ordinary General Assembly of the Synod of Bishops, October 2001.

He served as President of the Bishops’ Conference of Argentina from 8 November 2005 until 8 November 2011.  He was created and proclaimed Cardinal by Blessed John Paul II in the consistory of 21 February 2001, of the Title of S. Roberto Bellarmino (St. Robert Bellarmine).

He was a member of:

The Congregations for Divine Worship and Discipline of the Sacraments; for the Clergy; and for Institutes of Consecrated Life and Societies of Apostolic Life; the Pontifical Council for the Family; and the Pontifical Commission for Latin America.