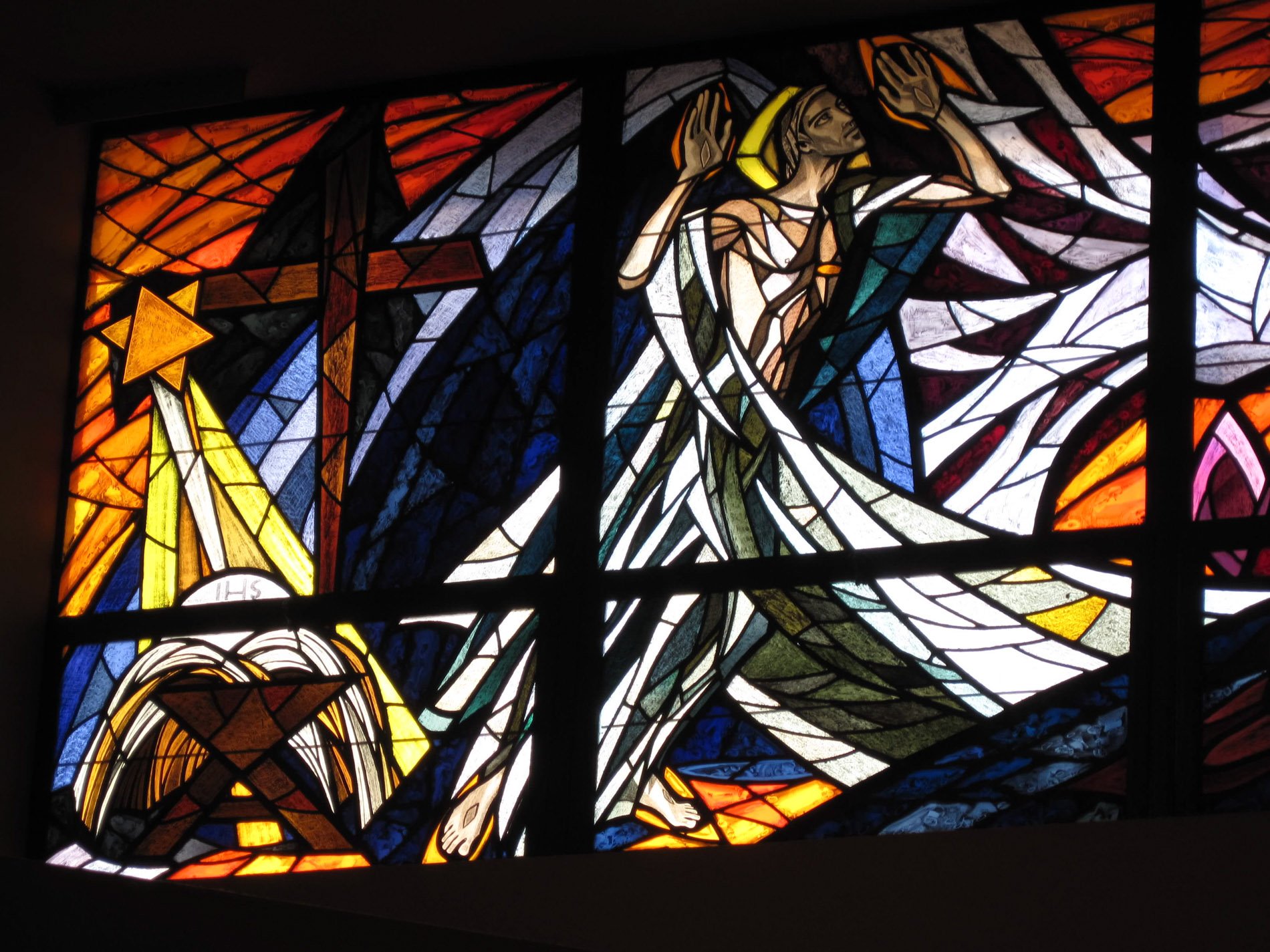 This day, in which for the first time I may sit in the chair of the Bishop of Rome, as Successor of Peter, is the day in which the Church in Italy celebrates the feast of the Lord’s Ascension. At the center of this day, is Christ. And only thanks to him, thanks to the mystery of his Ascension, are we able to understand the meaning of the chair, which in turn is the symbol of the authority and responsibility of the bishop. What, then, does the feast of the Lord’s Ascension tell us? It does not say that the Lord has gone to a place far away from men and the world. The Ascension of Christ is not a journey into space to the most remote heavenly bodies, because in the end, heavenly bodies, like the earth, are also made up of physical elements.

The Ascension of Christ means that he no longer belongs to the world of corruption and death, which conditions our life. It means that he belongs completely to God. He, the eternal Son, has taken our human being to the presence of God; he has taken with him flesh and blood in a transfigured form. Man finds a place in God through Christ; the human being has been taken into the very life of God. And, given that God embraces and sustains the whole cosmos, the Lord’s Ascension means that Christ has not gone far away from us, but that now, thanks to the fact he is with the Father, he is close to each one of us forever. Each one of us may address him familiarly; each one may turn to him. The Lord always hears our voice. We may distance ourselves inwardly from him. We can live with our backs turned to him, but he always awaits us, and is always close to us.

From the readings of today’s liturgy we also learn something more about the concrete way in which the Lord is with us. The Lord promises his disciples his Holy Spirit. The first reading tells us that the Holy Spirit will be “strength” for the disciples; the Gospel adds that he will guide us toward the fullness of truth. Jesus told his disciples everything, as he is the living word of God, and God can give no more than himself. In Jesus, God gave himself totally to us, that is, he gave us everything. In addition to this, or together with this, there can be no other revelation able to communicate something else, or to complete, in a certain sense, the revelation of Christ. In him, in the Son, we were told everything, we were given everything. But our ability to understand is limited; for this reason the mission of the Spirit consists in introducing the Church in an ever new way, from generation to generation, into the grandeur of the mystery of Christ.

The Church does not present anything different or new next to Christ; there is no pneumatic revelation next to that of Christ, as some believe, there is no second level of revelation. No: “He will take what is mine,” says Christ in the Gospel (John 16:14). And, just like Christ, he only says what he hears and receives from the Father; the Holy Spirit is Christ’s interpreter. “He will take what is mine.” He does not lead us to other places, away from Christ, but makes us penetrate ever more within the light of Christ. For this reason, Christian revelation is, at the same time, always old and always new. For this reason, everything has always and already been given to us. At the same time, in the inexhaustible encounter with the Lord, encounter mediated by the Holy Spirit, every generation always learns something new.

Thus, the Holy Spirit is the force through which Christ makes us experience his closeness. But the first reading also leaves a second message: you will be my witnesses. The risen Christ is in need of witnesses who have encountered him, who have known him intimately through the force of the Holy Spirit, men who, having touched Him with their hand, so to speak, can attest to him. It was in this way that the Church, family of Christ, grew from “Jerusalem … to the ends of the earth,” as the reading says. The Church was built by witnesses, beginning with Peter and Paul, the twelve, all men and women who, full of Christ, in the course of the centuries have rekindled and will kindle again in an ever new way the flame of faith. Every Christian, in his way, can and must be a witness of the risen Lord. When we read the names of the saints, we can see how many times they have been, above all — and continue to be — simple men, men from whom arose — and arises — a shining light capable of leading to Christ.

But this symphony of witnesses is gifted with a clearly defined structure: to the successors of the apostles, namely, the bishops, corresponds the public responsibility to make this network of witnesses endure with the passing of time. In the sacrament of episcopal ordination they are conferred the necessary authority and grace to exercise this service. In this network of witnesses, a special task corresponds to the Successor of Peter. Peter expressed in the first place, in the name of the apostles, the profession of faith: “Your are the Christ, the Son of the living God” (Matthew 16:16). This is the task of all the Successors of Peter: to be the leader in the profession of faith in Christ, the Son of the living God.

The chair of Rome is, first of all, chair of this creed. From the loftiness of this chair, the Bishop of Rome is obliged to repeat constantly: “Dominus Iesus.” “Jesus is Lord,” as Paul wrote in his Letters to the Romans (10:9), and to the Corinthians (1 Corinthians 12:3). To the Corinthians he said, with particular emphasis: “For although there may be so-called gods in heaven or on earth … yet for us there is one God, the Father … and one Lord, Jesus Christ, through whom are all things and through whom we exist” (1 Corinthians 8:5). The chair of Peter obliges its incumbents to say, as Peter did at a moment of crisis of the disciples, when many wished to go away: “Lord, to whom shall we go? You have the words of eternal life; and we have believed, and have come to know, that you are the Holy One of God” (John 6:68 and following).

Whoever sits on the chair of Peter must remember the words that the Lord said to Simon Peter in the Last Supper: “And when you have returned again, strengthen your brethren” (Luke 22:32). The holder of the Petrine ministry must be conscious of being a frail and weak man, as his own strength is frail and weak, constantly needing purification and conversion. But he can also be conscious that from the Lord he receives strength to confirm his brethren in the faith and to keep them united in the confession of Christ, crucified and risen. In the First Letter of St. Paul to the Corinthians, we find the oldest account of the Resurrection available. Paul took it up faithfully from the witnesses. This account speaks first of all of the Lord’s death for our sins, of his burial, of his resurrection, which took place on the third day, and later he says: “he appeared to Cephas, then to the twelve” (1 Corinthians 15:5). Thus is summarized once again the meaning of the mandate conferred on Peter until the end of times: to be witness of the risen Christ.

VATICAN CITY, MAY 9, 2005 – This is a translation of the first part of the homily Benedict XVI delivered Saturday when taking possession of the cathedral of the Bishop of Rome, the Basilica of St. John Lateran.

Joseph Ratzinger, the future Pope Benedict XVI, was born in Bavaria, Germany, on April 16, 1927, Holy Saturday, and baptized the very same day, in the newly blessed Easter water. This special baptism was seen from the beginning of his life as a very special blessing of Divine Providence.

Josef and his brother George entered the seminary and were ordained priests together on June 29, 1951. After receiving his doctorate in theology from the University of Munich in 1953, Fr. Joseph Ratzinger became a professor of dogmatic theology at the University of Bonn. When Vatican Council II began in 1962, Fr. Ratzinger, only 35 years old at the time, was named chief “peritus” or theological advisor to the Archbishop of Cologne, Joseph Cardinal Frings and accompanied him to all four sessions of the council, having input on the writing of several of the Council Documents. From 1969 until 1977 he taught theology at the University of Regensburg and, from 1969 until 1980, he was a member of the Vatican’s International Theological Commission.

Besides his academic articles and official Church documents, the new Pope Benedict XVI provides us with a window into his mind and heart through several books, the Ratzinger Report (1996), The Spirit of the Liturgy (2000), God and the World (2002) and Introduction to Christianity. For those who have had the privilege of knowing him personally, what is most striking about him is his simplicity, humility, and childlike wonder at things. His self-effacing manner is combined, however, with a firm but gentle courage in defending the faith in all its fullness and integrity. In his resolute opposition to error, he is however, never personally defensive since he has no ego to protect. It is worth noting that on his coat of arms, Benedict replaced the traditional papal tiara with a bishop’s miter with three stripes representing the Church’s three-fold mission to teach, sanctify, and govern. At his inaugural Mass, he took the time to explain the importance of the pallium which symbolizes the shepherd’s mission and the yoke of Christ.