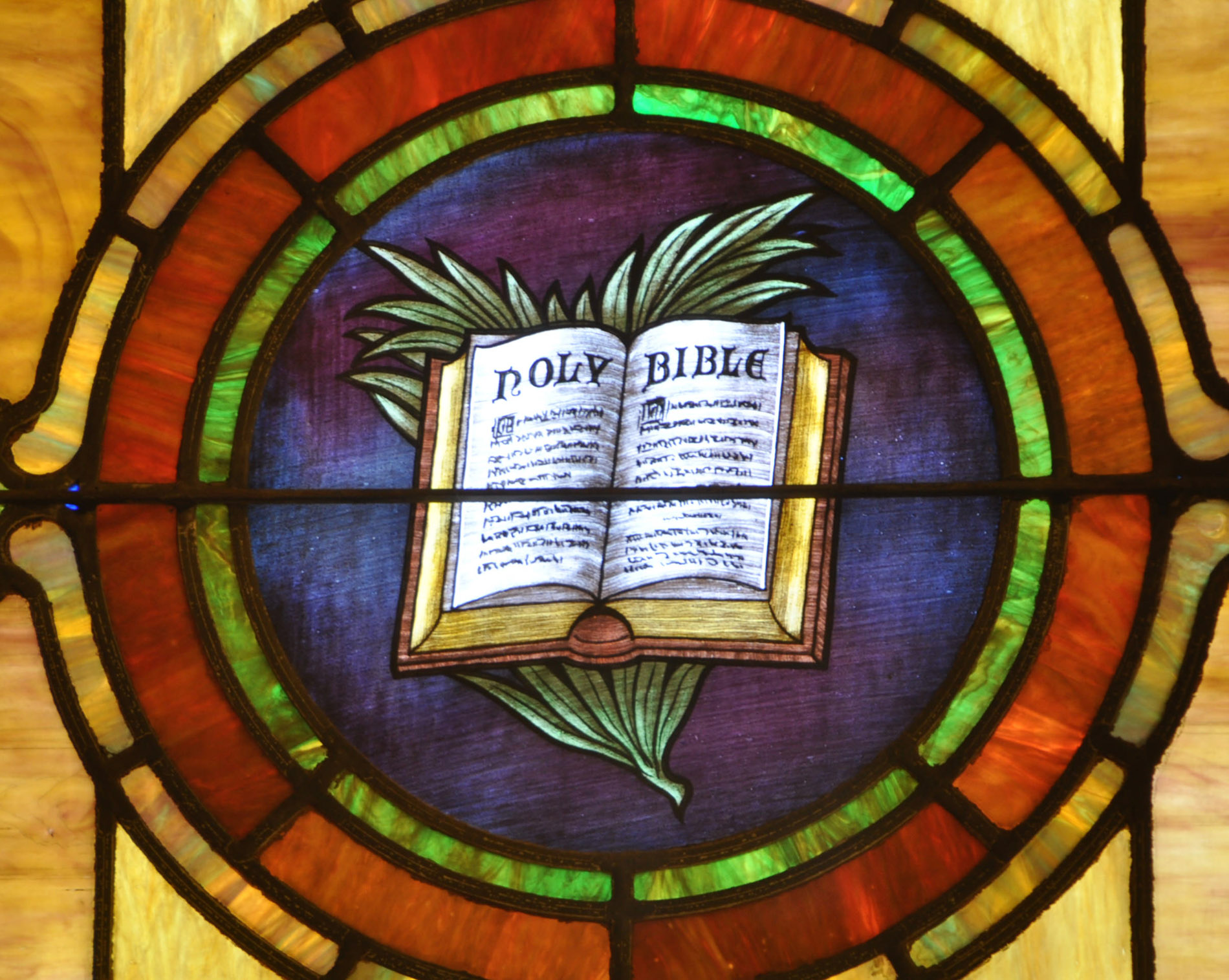 The phrase “the word of the Lord” appears hundreds of times in the Hebrew Scriptures. It is the authority that Moses invokes for his law, and the prophets for their oracles. It is, according to the historical books, the authority behind the inspired deeds of the kings. The “word of the Lord” that reveals the covenant law is the very “word” by which God created the universe:

“By the word of the LORD the heavens were made, and all their host by the breath of his mouth” (Ps. 33:6). God’s word, then, stands as objective truth, as immovable as a mountain, as unalterable as the moon and stars. “By the breath of his mouth,” God made the world and inspired the Scriptures, according to the Psalm. The Pauline term for God’s role in the authorship of Scripture is theopneustos, literally “God-breathed.” It appears in the Second Letter to Timothy: “All scripture is inspired by God and profitable for teaching, for reproof, for correction, and for training in righteousness” (2 Tim. 3:16). This passage—like all New Testament references to “scripture”—speaks, of course, of the Old Testament writings. For Jesus and His disciples, and indeed all His Jewish contemporaries, the Scriptures held a unique authority. They were “living oracles” (Acts 7:38) “delivered by angels” (Acts 7:53).

The divine authority of Scripture is implicit in the act of liturgical proclamation; but it is almost always made explicit as well in the texts of the liturgy. The Church traditionally begins or ends the readings with an acclamation of their authority: “The Word of the Lord!” Or, in the Byzantine tradition: “Wisdom! Be attentive!” The wisdom of God speaks to His people.

Scripture is, in this sense, profoundly sacramental. Augustine spoke of each of the Church’s sacraments as a “visible word” (verbum visibile), and of the word as an “audible sacrament” (sacramentum audible). In the last generation, theologians such as Lucien Deiss and F.X. Durrwell described a “real presence” of Christ in the Scriptures. Aimé Georges Martimort made the necessary distinctions: “While the Word of God is not a sacrament in the strict sense, its proclamation in the liturgy has a special and unmatched authority and power. Moreover, it is the power exerted by this Word in the saving actions of Christ that founds the efficacy of the Church’s sacramental actions.”

Scripture conveys the divine Word, then, in a way that is analogous to sacramental efficacy. That is why the Church has traditionally understood the Scriptures to be without error. Yet “without error” does not adequately describe the extent of the Bible’s sacramentality. Other books can be free of error— for example, a well-edited algebra textbook in its eighth edition—but no other book has God as its author, and so no other text conveys God’s saving power so purely: “The words that I have spoken to you are spirit and life” (Jn. 6:63).

Scripture’s authority is thus an extension of Christ’s own authority, and its characteristics are analogous to those of Christ Himself. Jesus Christ is God’s Word incarnate in humanity, without sin; the Bible is the Word inspired, without error. Jesus Christ is fully human and fully divine; the scriptures are both fully divine and fully human, with the Holy Spirit as their principal author and human writers as their instrumental authors. Scripture partakes of the mystery it imparts, that is, the mystery of Christ Himself. In the words of Pope Pius XII: “For as the substantial Word of God became like to men in all things, ‘except sin,’ so the words of God, expressed in human language, are made like to human speech in every respect, except error.”

The Second Vatican Council described this relationship in its constitution Dei Verbum:
The divinely revealed realities, which are contained and presented in the text of sacred Scripture, have been written down under the inspiration of the Holy Spirit. For Holy Mother Church relying on the faith of the apostolic age, accepts as sacred and canonical the books of the Old and the New Testaments, whole and entire, with all their parts, on the grounds that, written under the inspiration of the Holy Spirit (cf. Jn 20:31; 2 Tim. 3:16; 2 Pet. 1:19–20; 3:15–16), they have God as their author, and have been handed on as such to the Church herself. To compose the sacred books, God chose certain men who, all the while he employed them in this task, made full use of their powers and faculties so that, though he acted in them and by them, it was as true authors that they consigned to writing whatever he wanted written, and no more.

Since, therefore, all that the inspired authors, or sacred writers, affirm should be regarded as affirmed by the Holy Spirit, we must acknowledge that the books of Scripture, firmly, faithfully and without error, teach that truth which God, for the sake of our salvation, wished to see confided to the sacred Scriptures. (DV, no. 11)

Dei Verbum makes clear that inspiration is not merely for the sake of an unerring text, but “for the sake of our salvation.” Still, an unerring text “follows” logically from the doctrine of inspiration. Divine authorship is an act of God and, as such, it precludes error. The Second Vatican Council builds here upon the tradition of the Fathers, summarized in the encyclical Providentissimus Deus of Pope Leo XIII: “For all the books which the Church receives as sacred and canonical, are written wholly and entirely, with all their parts, at the dictation of the Holy Spirit; and so far is it from being possible that any error can coexist with inspiration, that inspiration not only is essentially incompatible with error, but excludes and rejects it as absolutely and necessarily as it is impossible that God Himself, the supreme Truth, can utter that which is not true. This is the ancient and unchanging faith of the Church.”

What Leo and Vatican II made explicit had been implicit in Christian doctrine since the first generations. Clement of Rome, writing perhaps as early as AD 69 (and certainly no later than 96), assumed it in its fullness: “Look carefully into the scriptures,” he wrote, “which are the true utterances of the Holy Spirit. Observe that nothing of an unjust or counterfeit character is written in them.” Clement’s teaching found further amplification in Justin, Irenaeus, Theophilus, Tatian, Jerome, and Augustine.

The idea of Scripture’s divine authority exercised a profound influence on early Christian liturgy. The Church venerated the sacred page because of its sacramentality, which was analogous to that of the Eucharist. Word and sacrament commanded reverence both in doctrinal expression and in devotional life. The custom of kissing the Book of Gospels, which remains with the Church today, arose in those early centuries, as did the custom of “enthroning” the biblical books in the church.

In third-century Egypt, the theologian Origen urged his listeners to adopt a very practical piety toward both Scripture and the Eucharist: “You who are accustomed to attending the divine mysteries know how, when you receive the body of the Lord, you guard it with all care and reverence lest any small part should fall from it, lest any piece of the consecrated gift be lost. For you believe yourself guilty, and rightly so, if anything falls from there through your negligence. But if you are so careful to preserve his body, and rightly so, why do you think that there is less guilt to have neglected God’s word than to have neglected his body?” Dei Verbum summarized this tradition of reverence when it spoke, metaphorically, of the “table of the word” in addition to the table of the altar (DV, no. 51).

The Word is the Lord’s, but it is revealed to mankind. It must be written, but primarily so that it can be proclaimed “in the midst of the assembly” (Sir. 15:5) in every generation. Theologian Jeremy Driscoll said it with startling simplicity: “The book is a means to an end.”

And the end, he explained, is “the presence of the living Word in the midst of the believing assembly, accomplishing and extending to that assembly what has been accomplished in concrete historical events.” And the words of the Gospel, like the Word they signify, do come with power. The liturgy itself attests to this. At the end of the Gospel in every Mass, the rubrics instruct the priest or deacon to kiss the book, saying inaudibly, “May the words of the Gospel wipe away our sins.” It is the words of the gospel that bring about that saving effect.

Dr. Scott Hahn is a Professor of Theology and Scripture at Franciscan University of Steubenville in Ohio where he has taught since 1990. Scott is also the founder and director of Saint Paul Center for Biblical Theology also located in Steubenville.

Dr. Hahn is a former Presbyterian minister with ten years of youth and pastoral ministry experience in Pennsylvania, Ohio, Massachusetts, Kansas and Virginia and is a former Professor of Theology at Chesapeake Theological Seminary. He was ordained in 1982 at Trinity Presbyterian Church in Fairfax, Virginia.

Dr. Scott Hahn entered the Catholic Church at Easter 1986 in Milwaukee, Wisconsin and he was joined by his wife Kimberly at the Easter Vigil Mass in 1990. Since 1990, Dr. Hahn has served as professor of theology and Scripture at Franciscan University. In May 1995, Hahn was awarded a PhD in systematic theology from Marquette University (Phi Beta Kappa).

Dr. Scott Hahn has given over 600 talks in the US and other countries on theological and biblical topics related to the Catholic faith. Dr. Hahn has also written numerous books, some of which we carry on The Crossroads Initiative, including The Lamb’s Supper: The Mass as Heaven on Earth; Hail, Holy Queen: The Mother of God in the Word of God; First Comes Love: Finding Your Family in the Church and the Trinity, and Understanding Our Father: Biblical Reflections on the Lord’s Prayer, Swear to God, and Scripture Matters are the titles of his newest books. He is also the author of Lord Have Mercy, A Father Who Keeps His Promises: God’s Covenant Love in Scripture, co-author (along with his wife, Kimberly) of Rome Sweet Home: Our Journey to Catholicism, and co-editor of Catholic for a Reason: Scripture and the Mystery of the Family of God. Dr. Hahn has also written numerous articles and is editor of Scripture Matters as it appears in Envoy Magazine.