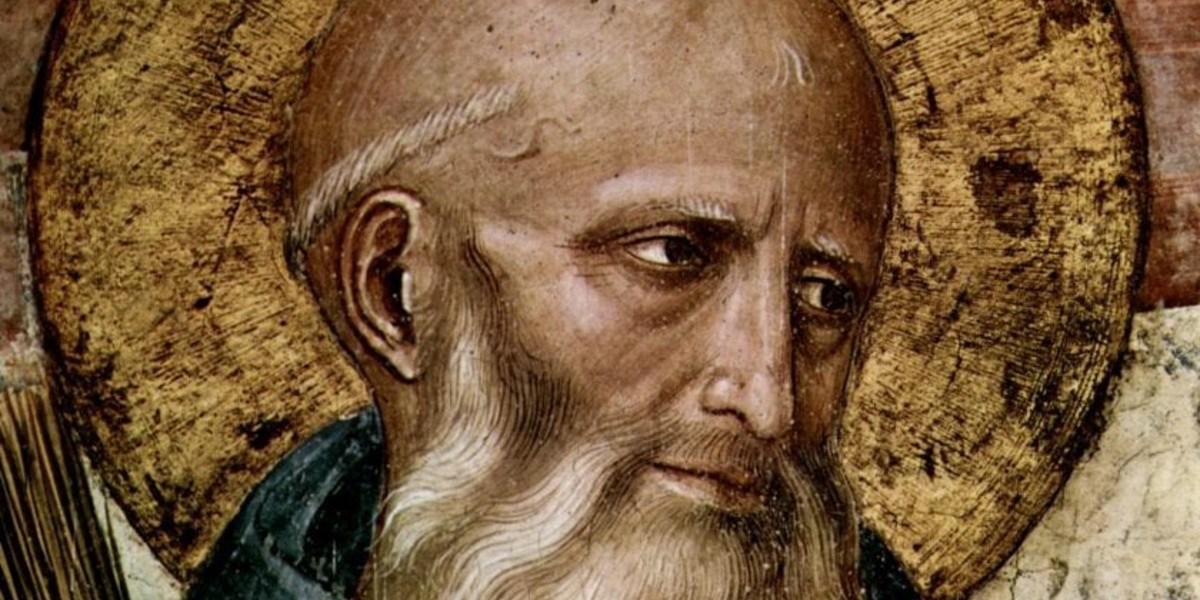 On October 24,1964, in his Apostolic Letter, Pacius Nuntius, Pope Paul VI proclaimed Saint Benedict of Nursia, patriarch of western monasticism, the Principal Patron of Europe at Monte Cassino Abbey.  Here is an excerpt.

When the man of God was keeping watch and praying, he saw the whole world gathered as though into one sunbeam. (Dialogues 2:35)

Saint Benedict has the reputation of being the messenger of peace, the maker of unity, the master of civilization, and especially the herald of Christianity and the author of monasticism in the West. When darkness seemed to be spreading over Europe after the fall of the Roman empire, he brought the light of dawn to shine upon this continent. For with the cross, the book and the plow, Christian civilization was carried, principally through him and his disciples, to the peoples who lived in those lands which stretch from the Mediterranean to Scandinavia, and from Ireland to Poland.

With the cross, that is, the Law of Christ, he strengthened and developed the institutions of private and social life. Through the “Work of God,” that is, through the careful and assiduous conduct of prayer, he taught that divine worship was of the greatest importance in the social order. And so he sealed that spiritual unity of Europe in which the various nations of different ethnic origins and languages felt themselves to be united into one people of God. And so this unity, learnt from so great a master, which the disciples of St. Benedict so faithfully strove to achieve, became the principle element in that period of history called the middle ages. All people of good will in our times must strive to recover that unity, which as Saint Augustine says, is “the form of all beauty,” and which alas has been lost in the vicissitudes of history.

With the book, that is, with the culture of the mind, this venerable patriarch from whom so many monasteries have drawn their name and their spirit, spread his doctrine through the old classics of literature and the liberal arts, preserved and passed on to posterity by them with so much care.

And lastly, with the plow, that is, through agriculture, he changed the waste and desert lands into orchards and delightful gardens; and joining work with prayer in the spirit of those words, ora et labora, he restored the dignity of human labor.

Not without reason, then, did Pope Pius XII call Saint Benedict  the “Father of Europe,” for he inspired the peoples of this continent with the love of order upon which their social life depends. We pray he may look upon Europe, and by his prayer, achieve even greater things in years to come.

It is perhaps is the worldwide, evangelizing impact of St. Benedict’s humble holiness that inspired Cardinal Joseph Ratzinger to choose to be known as Pope Benedict XVI.

Gianbattista Montini was elected Pope in 1963 upon the death of John XXIII. The new Pope took the name of Paul, the Apostle to the Gentiles, because of Paul’s role to the proclamation of the Gospel to the four corners of the earth. It fell to Pope Paul VI to complete the work of the Second Vatican Council and to see that Vatican II’s teaching was implemented in the life of the Church. Though less jovial and humorous than his predecessor, Pope Paul VI was an inspiration in his relentless energy in serving the Lord. It was he who began the international Papal travel that was taken up so effectively by Pope John Paul II. Pope Paul VI died in 1978 and was succeeded by Pope John Paul I.