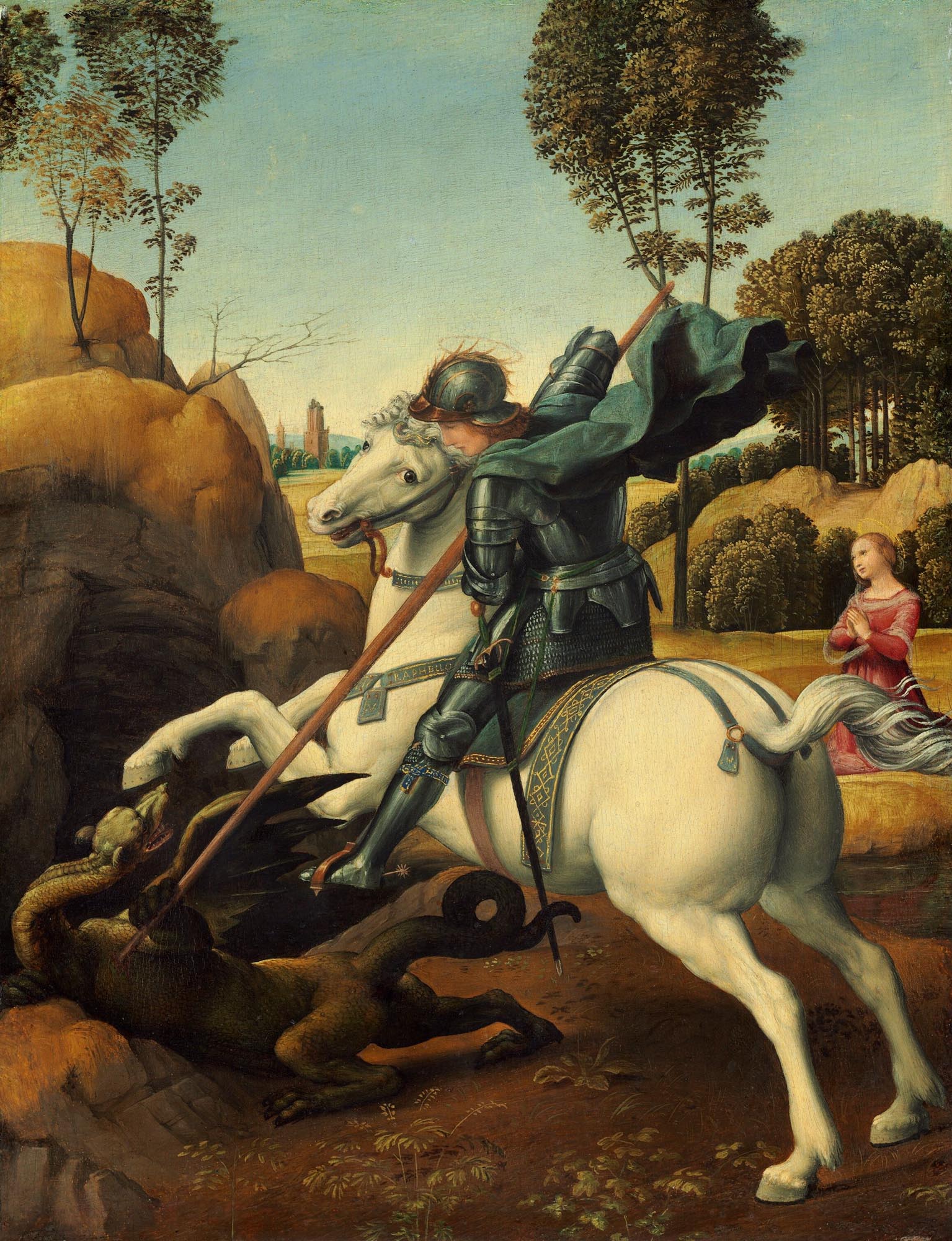 Peter Damian on St. George.  The veneration of Saint George, the courageous soldier of Christ and martyr,  began as early as the fourth century at Lydda in Palestine, where a church was built in his honor.  From antiquity this veneration has spread throughout both the East and the West.   His feast is April 23.

Dear brothers, our joy in today’s feast is heightened by our joy in the glory of Easter, just as the splendor of a precious jewel enhances the beauty of its gold setting.

Saint George was a man who abandoned one army for another: he gave up the rank of tribune to enlist as a soldier for Christ.  Eager to encounter the enemy, he first stripped away his worldly wealth by giving all he had to the poor. Then, free and unencumbered, bearing the shield of faith, he plunged into the thick of the battle, an ardent soldier for Christ.

Clearly what he did serves to teach us a valuable lesson: if we are afraid to strip ourselves of our worldly possessions, then we are unfit to make a strong defense of the faith.

As for Saint George, he was consumed with the fire of the Holy Spirit.  Armed with the invincible standard of the cross, he did battle with an evil king and acquitted himself so well that, in vanquishing the king, he overcame the prince of all wicked spirits, and encouraged other soldiers of Christ to perform brave deeds in his cause.

Of course, the supreme invisible arbiter was there, who sometimes permits evil men to prevail so that his will may be accomplished.  And although he surrendered the body of his martyr into the hands of murderers, yet he continued to take care of his soul, which was supported by the unshakable defense of its faith.

Dear brothers, let us not only admire the courage of this fighter in heaven’s army but follow his example.  Let us be inspired to strive for the reward of heavenly glory, keeping in mind his example, so that we will not be swayed from our path, though the world seduce us with its smiles or try to terrify us with naked threats of its trials and tribulations.

We must now cleanse ourselves, as Saint Paul tells us, from all defilement of body and spirit, so that one day we too may deserve to enter that temple of blessedness to which we now aspire.

Anyone who wishes to offer himself to God in the tent of Christ, which is the Church, must first bathe in the spring of holy baptism; then he must put on the various garments of the virtues.  As it says in the Scriptures, Let your priests be clothed in justice.  He who is reborn in baptism is a new man.  He may no longer wear the things that signify mortality. He has discarded the old self and must put on the new.  He must live continually renewed in his commitment to a holy sojourn in this world.

Truly we must be cleansed of the stains of our past sins and be resplendent in the virtue of our new way of life.  Then we can be confident of celebrating Easter worthily and of truly following the example of the blessed martyrs.

This is an excerpt from a sermon on Saint George by St. Peter Damian, bishop and doctor of the Church from the 11th century.  It appears in the Roman Office of Readings for the Feast of St. George, martyr on April 23.
Click here to download, print and share Saint George, Martyr

Born at Ravenna, Italy, of poor parents, Peter did farm work and tended swine in his youth. When his great intelligence was recognized, he was sent away to study at Faenza and Parma. In 1035 he entered the Benedictine hermitage of Fonte Avellla at Gubbio, where he began to live a life of prayer and austerity. About the year 1043 he was chosen prior and spent the next several years establishing new monasteries and reforming old ones, becoming famous as an uncompromising preacher of holiness to clergy and laity alike. In 1057 he was made Cardinal Bishop of Ostia much against his will, adopting the name “Damian” in gratitude to his brother of that name who had financed his education. St. Peter was sent several times on diplomatic missions to France and Germany. He died on a journey back to his native town, Ravenna, which he had reconciled to the pope. During his life, Peter enjoyed great authority owing to his learning, zeal, and unquestionable integrity. He never tired of denouncing immorality and dishonesty when he found such among the clergy.  His Book of Gomorrah condemned in extraordinary the clerical sexual abuse and homosexual sin of many clergy, calling on the Pope to take severe and decisive action against offenders.  His writings treat of spiritual but also of doctrinal issues such as purgatory, the Eucharist, and the validity of sacraments administered by unworthy priests.  He was never formerly canonized, but immediately revered as a saint.  In 1828 Pope Leo XII extended his feast to the universal Church and named him Doctor of the Church. Biography by Dr. Italy