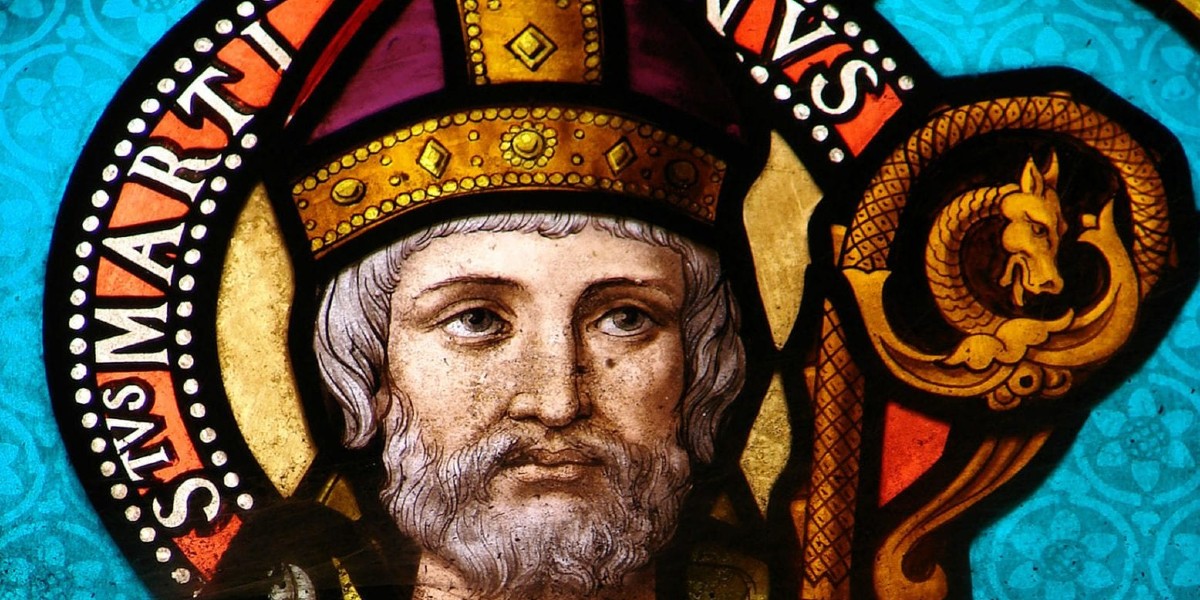 St. Martin of Tours, whose feast is November 11, was born in Pannonia of pagan parents around the year 316. He was baptized after forsaking military life, founded a monastery in France under the direction of St. Hilary, and was later chosen bishop of Tours. He was known during his lifetime as an exemplary pastor who educated the clergy, founded monasteries, and preached the gospel to the poor. He died in 397 AD.  The following was written by a contemporary, Sulpicius Severus.

Martin knew long in advance the time of his death and he told his brethren that it was near. Meanwhile, he found himself obliged to make a visitation of the parish of Candes. The clergy of that church were quarrelling, and he wished to reconcile them. Although he knew that his days on earth were few, he did not refuse to undertake the journey for such a purpose, for he believed that he would bring his virtuous life to a good end if by his efforts peace was restored in the church.

He spent some time in Candes, or rather in its church, where he stayed. Peace was restored, and he was planning to return to his monastery when suddenly he began to lose his strength. He summoned his brethren and told them he was dying.

All who heard this were overcome with grief. In their sorrow they cried to him with one voice: “Father, why are you deserting us? Who will care for us when you are gone? Savage wolves will attack your flock, and who will save us from their bite when our shepherd is struck down? We know you long to be with Christ, but your reward is certain and will not be any less for being delayed. You will do better to show pity for us, rather than forsake us.”

Martin Manifested the Compassion of the Lord

Thereupon he broke into tears, for he was a man in whom the compassion of our Lord was continually revealed. Turning to our Lord, he made this reply to their pleading: “Lord, if your people still need me, I am ready for the task; your will be done”.

Here was a man words cannot describe. Death could not defeat him nor toil dismay him. He was quite without a preference of his own; he neither feared to die nor refused to live. With eyes and hands always raised to heaven he never withdrew his unconquered spirit from prayer.

Look Toward Heaven rather than at the earth

It happened that some priests who had gathered at his bedside suggested that he should give his poor body some relief by lying on his other side. He answered: “Allow me, brothers, to look toward heaven rather than at the earth, so that my spirit may set on the right course when the time comes for me to go on my journey to the Lord”. As he spoke these words, he saw the devil standing near. “Why do you stand there, you bloodthirsty brute?” he cried. “Murderer, you will not have me for your prey. Abraham is welcoming me into his embrace”.

With these words, he gave up his spirit to heaven. Filled with joy, Martin was welcomed by Abraham. Thus he left this life a poor and lowly man and entered heaven rich in God’s favor.

Born around 360 AD in the region of Gaul (modern France) called Aquitaine, Sulpicius Severus was an up and coming lawyer till his wife’s death caused him to pause and take stock of his life. The example of his friend, St. Paulinus of Nola, and the exhortations of St. Martin, bishop of Tours, led to his conversion to the monastic life. He settled on an estate in Southern Gaul and set to work writing the life of St. Martin who was still alive at the time. The work became very influential on later authors writing lives of the saints. According to one author, Sulpicius was ultimately ordained a priest and lived till about 420 AD. Biography by Dr. Italy