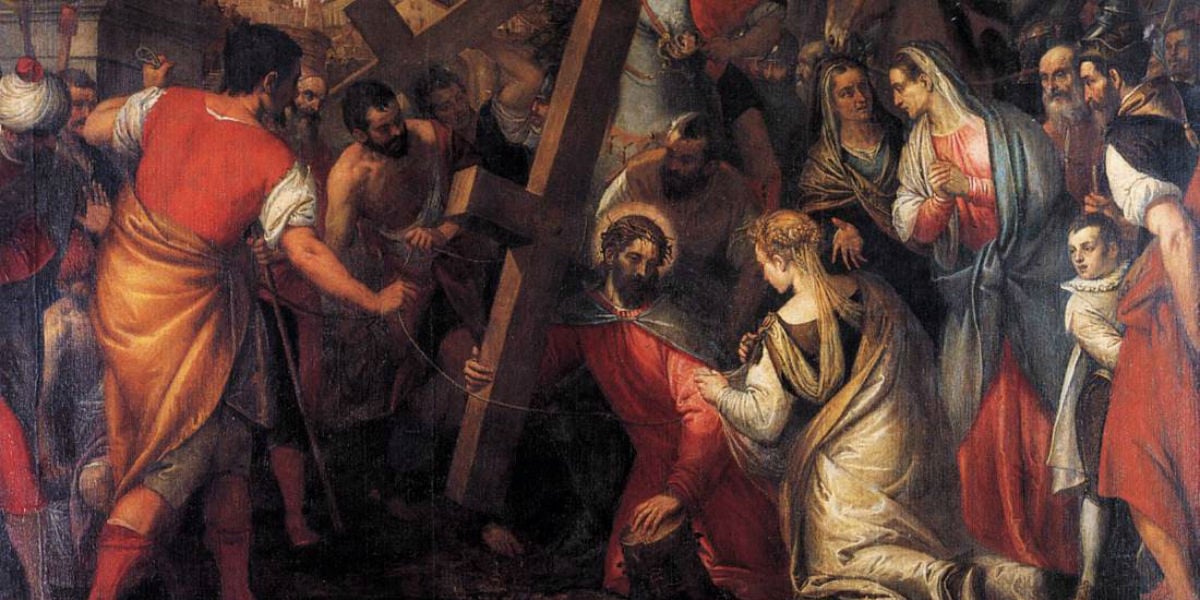 The Cross and the Sacred Heart of the World – Von Balthasar

This beautiful mediation by Hans Urs von Balthasar on Christ’s heart as the heart of the world, pierced on the cross by the soldiers lance (John 19) is a poignant mediation for Lent, Holy Week, the Feast of the Sacred Heart or anytime during the year.

THE VERY FORM OF THE CROSS, extending out into the four winds, always told the ancient Church that the Cross means solidarity: its outstretched arms would gladly embrace the universe.

According to the Didache, the Cross is semeion epektaseos, a “sign of expansion,” and only God himself can have such a wide reach: “On the Cross God stretched out his hands to encompass the bounds of the universe” (Cyril of Jerusalem). “In his suffering God stretched out his arms and embraced the world, thus prefiguring the coming of a people which would, from East to West, gather under his wings” (Lactantius). “O blessed Wood on which God was stretched out!” (Sibylline Oracles).

But God can do this only as a man, and his form is different from that of the animals in that “he can stand up straight and spread out his hands” (Justin). And thus it is that he can reach out to the two peoples, represented by the two thieves, and tear down the wall of division (Athanasius). Even in its outward form the Cross is all-inclusive.

Blood & Water from His Sacred Heart

But its interior inclusiveness is shown by the opened Heart out of which the last drops of Jesus’ substance are poured: blood and water, the sacraments of the Church. Both Biblically and philosophically (in the total human context, that is), the heart is conceived to be the real center of spiritual and corporeal man, and, by analogy, it is also seen as the very center of God as he opens himself up to man (I Sam. 13, 14).

In the Old Testament, the heart is still largely understood as the seat of spiritual energy and of thought, while the bosom or “bowels” (as in “bowels of mercy”: rachamim, splanchna) are rather taken to be the seat of the affections.

In the New Testament, however, both aspects coincide with the concept of “heart.” Having one’s “whole heart” turned to God means the opening of the whole man towards him (Acts 8,37; Mt. 22,37). Thus, the heart that was hardened (Mk.10,5, following numerous parallels in the Old Testament) must be renewed: from a stony heart it must become a heart of flesh (Ez. 11,19, etc.; cf 2 Cor. 3,3).

Heart as the Center of the Person

In the wake of Homer, Greek philosophy saw in the heart the center of psychic and spiritual life: for Stoicism, the heart is the seat of the hegemonikon, the guiding faculty in man. Going beyond this, New Testament theology adds, on the one hand, an incarnational element. The soul is wholly incarnate in the heart, and, in the heart, the body wholly becomes the medium for the expression of the soul.

At the same time, the New Testament adds an element of personhood: it is first in Christianity that the entire man–body and soul–becomes a unique person through God’s call and, with his heart, orients towards God this uniqueness that is his.

Heart of the World – Streams of Living Water

The narrative of the piercing with the spear and of the outpouring of blood and water should be read as being continuous with the Johannine symbolism of water, spirit and blood, to which also belong the references to “thirst.”

Earthly water again makes thirsty, but Jesus’ water quenches thirst forever (4,13f). “Let whoever is thirsty come to me and drink as one believing in me” (7,37f); thus the believer’s thirst is quenched forever (6,35). Related to this is the extraordinary promise that, in him who drinks it, Jesus’ water would become a fountain leaping up to life eternal (4,14), which is supported by the verse of Scripture: “Streams of living water will spring from his belly” (John: 7, 38).

It is at the moment when Jesus suffers the most absolute thirst that he dissolves, to become an eternal fountain. That verse may refer to the ever-present analogy between water and word/spirit (Jesus’ words are “spirit and life”). Even better, it may be related to the “fountain” in Ezechiel’s new temple (Ez. 47; cf Zach. 13,1), with which Jesus compared his own body (2,2t).

In the context of John’s general symbolism, there can be no doubt that in the outpouring of blood and water the evangelist saw the institution of the sacraments of eucharist and baptism (cf Cana: 2, lff.; the unity of water and spirit: 3,5; and of water, spirit and blood; 1 Jn. 5,6, with explicit reference to “Jesus Christ: “he it is that has come by water and blood”).

The opening of the Heart is the handing over of what is most intimate and personal for the use of all. All may enter the open, emptied space. Moreover, official proof had to be provided that the separation of flesh and blood had been realized to the full as a prerequisite for the form of the eucharistic meal. Both the (new) temple and the newly opened fountain where all may drink point to community. The surrendered Body is the locus where the new covenant is established, where the new community assembles. It is at once space, altar, sacrifice, meal, the community and its spirit.”

This excerpt on the pierced heart of Christ on the cross from which blood and water flows is taken from Hans Urs von Balthasar, The Heart of the World.

For more on the SACRED HEART OF JESUS and its meaning for the world, read this excerpt from ST. BONAVENTURE.

Dissatisfied with the prevalent Neo-Scholasticism of his day, von Balthasar was drawn to the rich theology of the Church Fathers. Along with Henri de Lubac, Jean Daniélou, and other Continental theologians of the ressourcement movement, he labored to bring theology and spirituality back to the Scriptures and Fathers as primary and direct theological sources. After moving to Basel in1940 to assume the responsibility of a university chaplain, he met Adrienne von Speyr (1902-67) who became a Catholic under his spiritual direction. Her writing became a major source of inspiration for his writing and he insisted that her work could not be separated from his own. Together they founded the Community of St. John, a “secular institute.” In light of his important role in this community, he left the Jesuits in 1950. Though he did not serve as a peritus (theological advisor to the bishops) during the Second Vatican Council, the influence of his writings can be seen in the conciliar documents. In 1972 he formed Communio: International Catholic Review with Daniélou, de Lubac, and Joseph Ratzinger. From 1961-87 he produced his most important work, a trilogy published in fifteen volumes: The Glory of the Lord, Theo-Drama, and Theo-Logic. After years of illness, Balthasar died on June 26, 1988, one day before he was to be made a cardinal by Pope John Paul II.