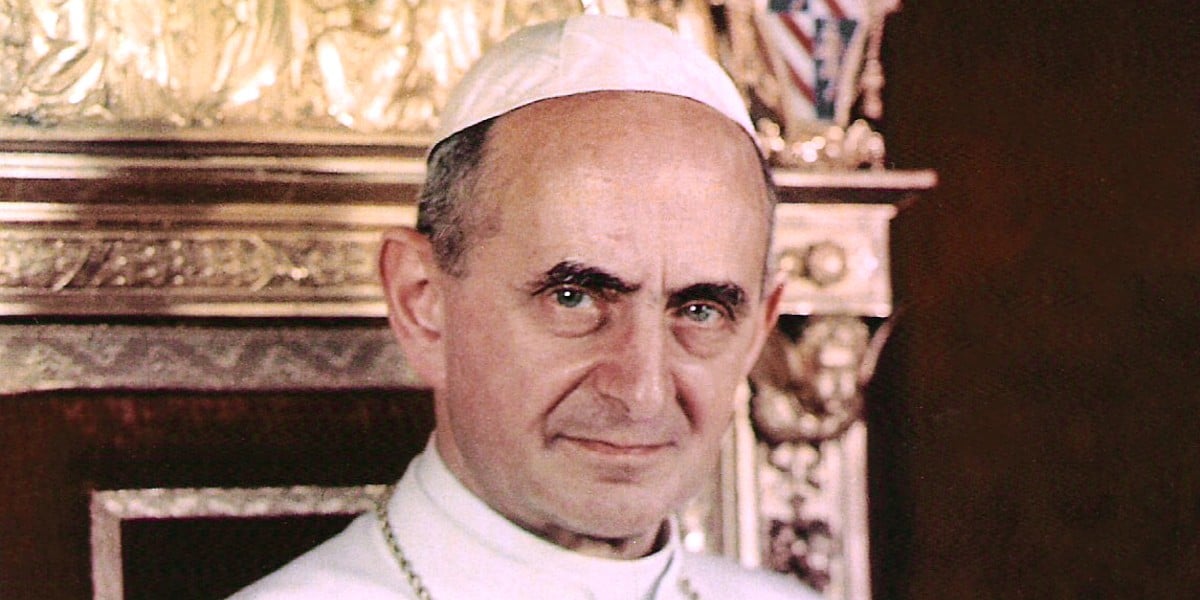 The Second Vatican Council was convened by Pope John XXIII in the Fall of 1962 and was concluded in December of that same year.  While the Council was in recess, John XXIII died.  The task of carrying on with the council fell to his successor, Paul VI.  In this brief speech delivered at the opening of the Council’s Second session, Paul VI reveals his determination to remain faithful to the vision of his predecessor and bring the council to a successful conclusion.

Dedicated to Pope John who gave his life for the Council. We cannot recall this event without remembering our predecessor of happy and immortal memory whom we greatly loved, John XXIII. To all of us who saw him in this seat, his name brings back the memory of his lovable and priestly image. When he opened the first session of this Second Vatican Council last October 11th, he gave a speech which appeared to be prophetic for our century–not only for the Church, but for the entire society of mankind. That speech still echoes in our memory and conscience while it directs the path the Council must take. It frees us from all doubt and weariness which we may encounter on this difficult journey.

Oh dear and venerated Pope John! May gratitude and praise be rendered to you. Surely under a divine inspiration you convoked this Council to open new horizons for the Church and to channel over the earth the new and yet untapped spring waters of Christ our Lord’s doctrine and grace. You did not act from earthly motives nor from the force of circumstances. But you acted as one who understood the Divine Will, one who penetrated into the dark and tormented needs of our age. You have resumed the interrupted course of the First Vatican Council. You have banished the uneasy assumption wrongly deduced from that Council that the supreme powers conferred on the Roman Pontiff to govern the Church–powers acknowledged by that Council–were sufficient without the help of ecumenical councils. You have summoned your brothers in the episcopate, the successors of the Apostles, not only to continue the interrupted study and suspended legislation, but to feel united with the Pope in a single body, to be comforted and directed by him “that the sacred deposit of Christian doctrine be guarded and taught more effectively” (A.A.S. 1962, p. 790).

But to the principal aim of the Council you added another which is more urgent and at this time more salutary–the pastoral aim–when you declared: “Nor is the primary purpose of our work to discuss one article or another of the fundamental doctrine of the Church,” but rather, “to consider how to expound Church teaching in a manner demanded by the times” (ibid. 791-792).

You have strengthened the convictions of the teaching authority of the Church regarding Christian doctrine. It is not only truth to be investigated by reason illumined by faith, but it is also the generative word of life and action. You have strengthened our opinion that the authority of the Church ought not to be limited to the condemnation of errors. Rather this authority should be extended to proclaim that positive and vital doctrine which is the source of its fecundity. The teaching office of the Church, which is neither wholly theoretical nor wholly negative, must in the Council manifest ever more the life-giving power of the message of Christ who said: “The words that I have spoken to you are spirit and life” (John 6:64).

Hence we shall ever keep in mind the norms which you, the first Father of this Council, have wisely laid down and which we may profitably repeat here: “Our task is not merely to guard this precious treasure, namely our Faith, as if we were only concerned with antiquity, but to dedicate ourselves with an earnest will and without fear to that work which our era demands of us, pursuing thus the path which the Church has followed for nearly 20 centuries. Hence, that method of presenting the truth must be used which is more in conformity with a magisterium prevalently pastoral in character” (A.A.S. 1962, pp. 791-792).

We shall have due regard for the great question of the unity in one flock of those who believe in Christ and wish to be members of the Church which, you John, have called the paternal home whose doors are open to all. The Council which you have promoted and inaugurated will proceed faithfully along the path you pointed out, so that with God’s help may it reach the goal you have so ardently desired and hoped for. Let us therefore go forward, Brothers.