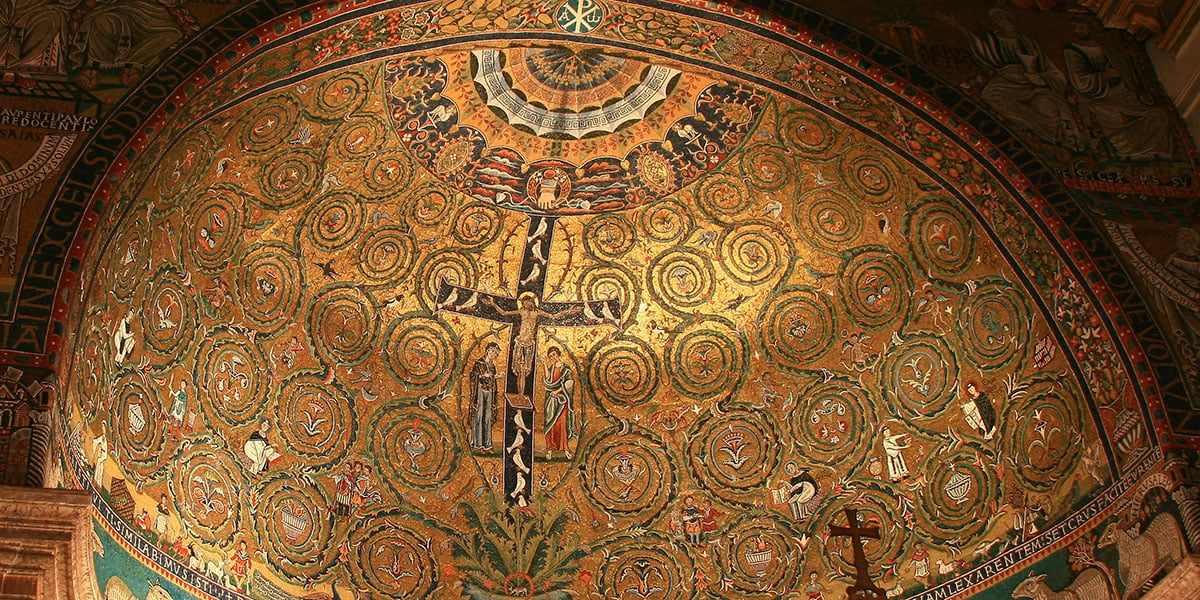 Clement and the Roman Basilica of San Clemente-Podcast

Podcast discussing the amazing Roman basilica that goes all the way back to the new testament period, San Clemente, dedicated to Clement of Rome, third successor of Peter.

Rome has a multitude of Churches.  When people think “basilica,” St. Peter’s comes to mind.  Some also think of the other three major basilicas of John Lateran, Mary Major, and St. Paul.

And these are the ones that most visitors to Rome visit, and rightly so.  Yet there are other hidden treasures that few know about and even fewer ever see.  One of these lies between St. John Lateran and, just a few blocks down the hill, the Colosseum.  The minor basilica of San Clemente. 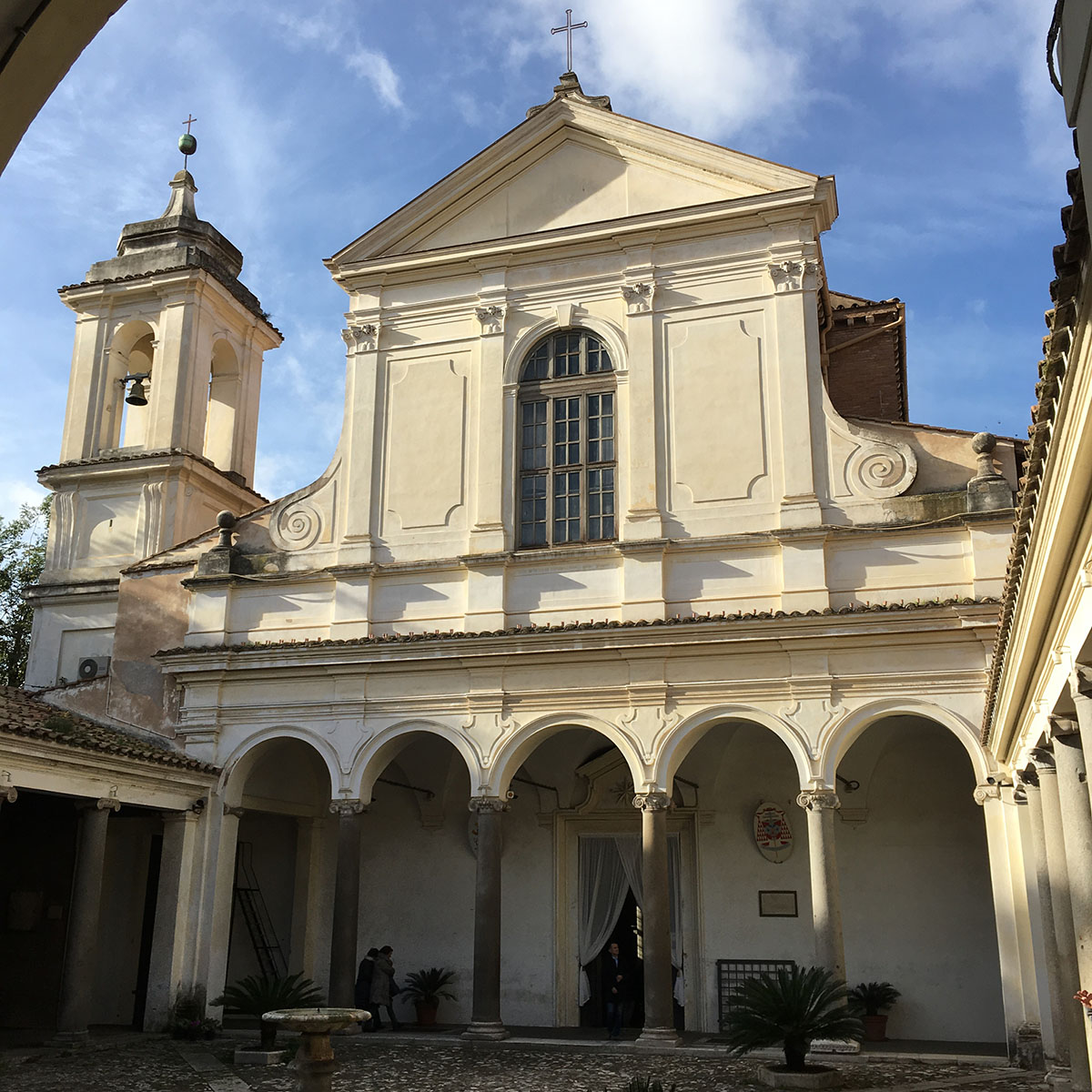 Above image of the exterior of the Basilica of Saint Clement by Gryffindor. CC0 1.0.

Around 1100 AD, this beautiful church was erected here dedicated to the memory of St. Clement, third successor of Peter as shepherd of the church of Rome.  Build long before the famous gothic cathedrals of Europe, this basilica of San Clement reveals a more ancient style of decoration, some items going back to the time of the church fathers.  A stunning apse mosaic mesmerizes the visitor – the cross with Christ hanging on it, but laden with luxuriant vines, abundant fruit, and joyful birds.  It is the cross as the tree of life, prefigured by the tree in the garden of Eden that bestowed not death but immortality.

But the Irish Dominicans who were the church’s caretakers found that this church was built over something else – a 4th century basilica, the original San Clemente, dedicated to St. Clement.  This brings us back to the time of St. Ambrose,  St. Augustine, and the great councils of Nicaea and Constantinople that gave us the Creed we profess each Sunday.  This lower level of San Clemente began to be excavated in the 19th century and was found also to contain the tomb of the great St. Cyril, brother of Methodius, inventor of the Cyrillic alphabet used by Russia, Serbia and many Slavic countries to this day. 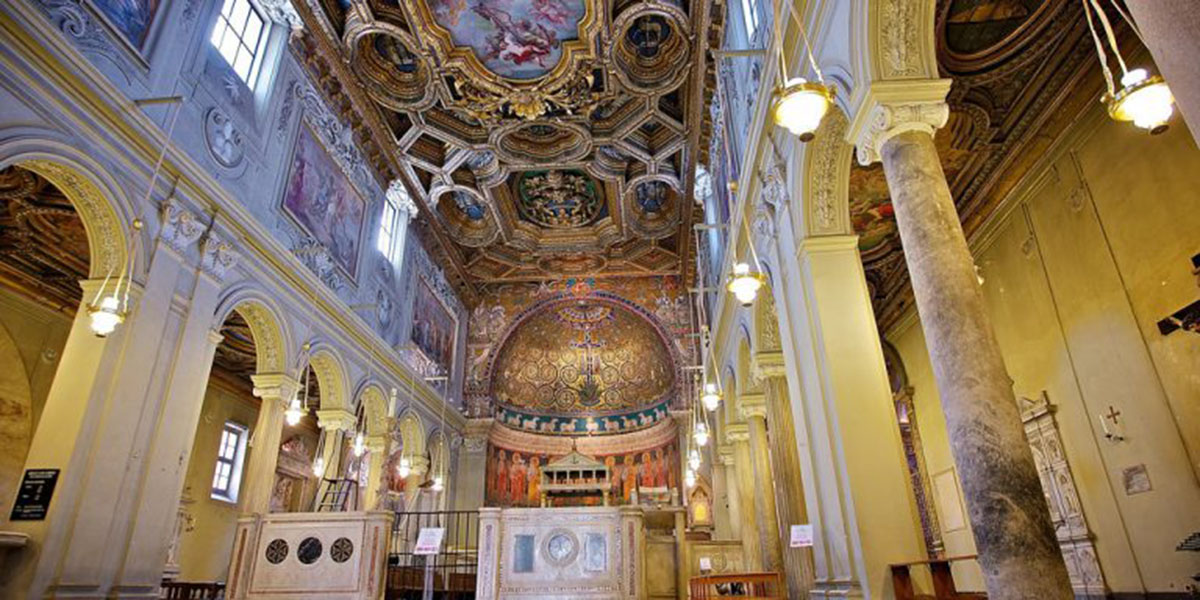 Above image of the interior of the Basilica of Saint Clement by Michael Foley. CC BY-NC-ND 2.0.

But in the 20th century, even more was discovered.  Under this fourth century basilica was found a first century Roman House Church, most likely the home of Clement himself.  It was built over the ruins of buildings destroyed in the great fire of Nero, 64 AD.  In an adjacent apartment building was also found a pagan shrine to the god Mithras.

The amazing thing is that we can see all of this, descending from the current basilica of San Clemente, filled with light, to the underground 4th century basilica, and finally even deeper into history to the first century level, where we can pray where the early Christians of Rome prayed in the company of their pastor, Pope Clement.

This is one of many stops on our Crossroads of Christendom pilgrimage to Italy, an amazing journey into our family heritage as Catholic Christians.

Banner/featured image of the interior of the Basilica of Saint Clement by Sitiens Lucem. CC 3.0.