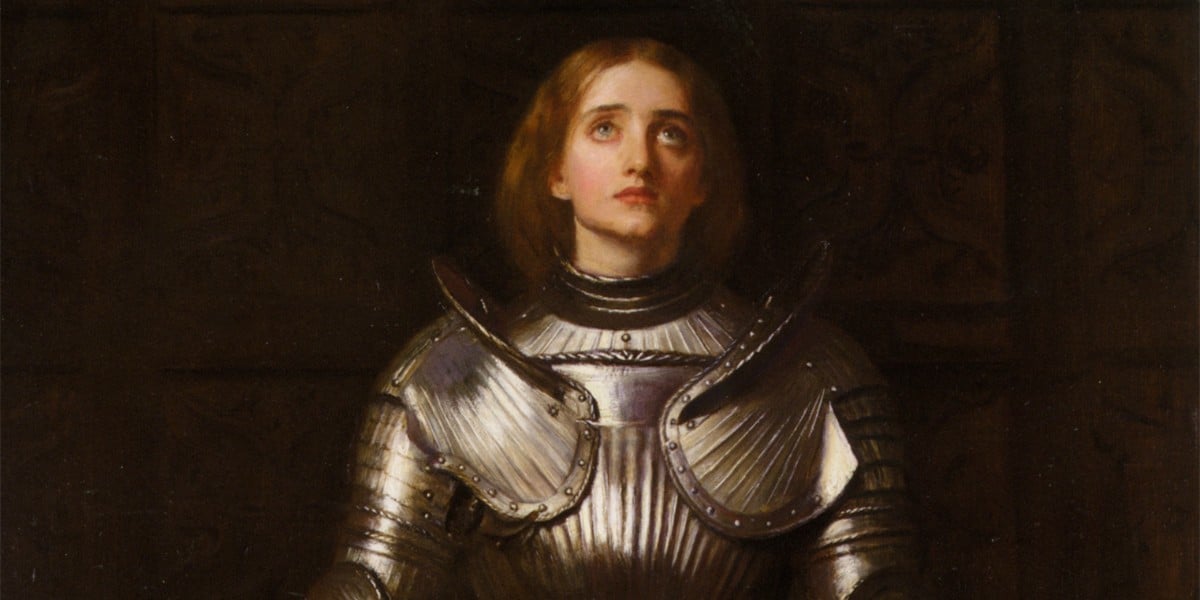 In this 14 minute podcast, Dr. Italy discusses with Anna Mitchell the amazing story of St. Joan of Arc and just how she serves as a model of faith and fortitude for us today.  Her memorial is May 30.

Joan of Arc, Model of Faith

The famous American author and humorist, Mark Twain, is best known for his best-selling, classic novels Tom Sawyer and Huckleberry Finn.  But of all his books, Twain most loved the historical novel he wrote on St. Joan of Arc.  Though he was himself not a Catholic, Twain saw Joan to be one of the most amazing and inspiring figures of human history.

From her fifteenth year to her death at age 19, she was a living, walking miracle, and her remarkable deeds are not a matter of pious legend, knowable by faith, but are a matter of indisputable public record, meticulously documented by testimony given under oath at three separate inquiries, two during her lifetime and one after her death.

This illiterate country girl, with no military experience, demanded and was given complete control of the French army and turned around a hundred years of military losses if not overnight, in the space of about a week.  She demonstrated a supernatural ability to lead, inspire, and strategize that left everyone, French and English, shaking their heads.

It all began when, at age 13, she heard the “voices” of St. Michael, St. Catherine (of Alexandria) and St. Margaret bringing messages from God that were almost as unbelievable as the message brought by Gabriel to the Virgin Mary.  She responded with a similar faith and said, echoing her Blessed Mother’s words, “let it be.”  She acted on the revelation she had received with confidence and determination, giving us a model of what faith is and what God can do when we respond to him with faith.

Model of Courage and Fortitude

Joan of Arc met the challenge of skeptical bishops and sneering courtiers with courage, fortitude and boldness.  She met the arrows and swords of her opponents in exactly the same way.  She fought her way through the encircling English siege of Orleans, and then fought battle after battle, charging at the head of her troops, all the way from the south of France to the Northern city of Rheims, the only place her Dauphin, the prince successor to the throne, could be anointed King.

She did not know it then, but she had accomplished her mission.   She was to receive from that point on very little communication from her voices, and little to no gratitude from the man she had crowned king.  Instead, she was relieved of command of the army and was given no finances to pay the soldiers who continued to follow her.

When she tried to defend the beleaguered town of Compiegne from an enemy attack, she was captured by French allies of the English.  The Dauphin and the French court would not even put up the money to ransom her.  But since the English were willing to pay a hefty price for her head, she was “sold” to them.  A corrupt French bishop in the pay of the English set up a kangaroo court to trick her, abuse her, and unjustly condemn her to death as a witch and heretic.

Joan of Arc demonstrates that courage does not mean having no feelings of fear – she thought to the end that she would be rescued.  When the sentence was read that she was to be burned alive, she felt revulsion and shock and broke down in tears.  Yet the next day, she bravely mounted the pire, asked for a cross, and, as the flames consumed her, boldly and nobly uttered only one cry – the name of Jesus.

For more on faith and fortitude, see the DISCIPLESHIP SECTION of the Crossroads Initiative Library.

To subscribe to Dr. Italy’s weekly podcast and never miss an episode, visit http://crossroadsinitiative.libsyn.com/, , SPOTIFY or the Catholic Heritage with Dr Italy podcasts on iTunes