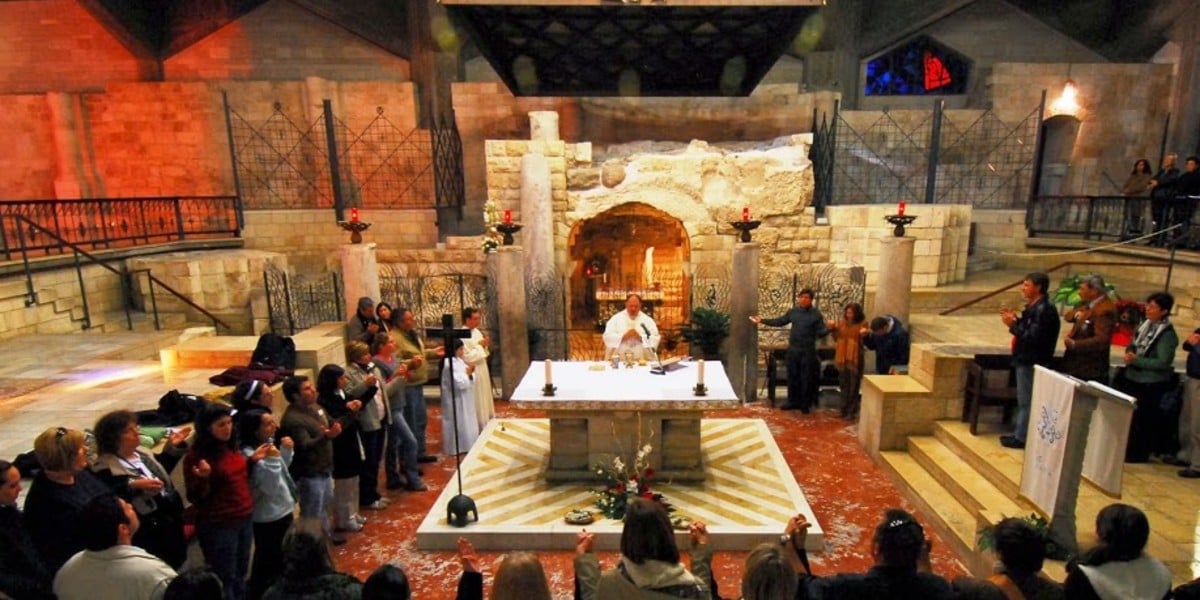 Nazareth Then and Now – Podcast

In this 7 minute podcast, excerpted from a national radio interview, Dr. Italy describes what the town of Nazareth was like in the time of Jesus and what it is like to visit it today on pilgrimage.

Marcellino D’Ambrosio here discusses the implications of the incarnation.   God became man in a specific moment of time chosen in his infinite wisdom.  But he also chose to grow up and spend most of his life in a very specific place.  He could have chosen anywhere.  Rome.  Athens.  Jerusalem.  But he selected none of these famous, prestigious places.  Instead he chose the most insignificance of places in Galilee, a place so small it is not even proper to call it a town in the normal sense.  It was instead a sleepy agricultural hamlet, off the beaten track, a marginal place of such little importance that it is never once mentioned in the Old Testament.

In the time of Jesus, Nazareth appears to have covered no more than four acres.  Perhaps 50 extended family homes of 300-500 people.  We know this from excavations of the first century town which can be seen today by anyone who visits Nazareth.  The town was surrounded by vineyards and fields to which most of the residents likely went to work on a daily basis.  Even those who did not work the land all of the time probably had plots of garden they tended and a few animals, like donkeys, chicken and sheep.  So Jesus’ stories of the sower and the seed and the vine and the branches likely come from first-hand experience with such things.

The furnishing and residences archeologists have uncovered from the time of Jesus are quite humble.  The people were poor and unpretentious.

Today Nazareth is a bustling city of 80,000 Arab Israelis.  There is a very small section of Jews in an elite neighborhood, true.  But this is an Arab town with 70% being Muslim and 30% Christian.  But still, at the heart of the town is the ancient center, now almost entirely covered by the massive Basilica of the Annunciation and its surrounding plaza.  In fact, the location of the Basilica is determined by a very precious site indeed: inside the basilica and protected by it is the remains of an ancient stone house believed to be the place where Mary entertained an angelic visitor who greeted her with the words: Hail Mary, full of grace!

There is an altar marking the spot of Gabriel’s encounter with Mary.  Inscribed on the altar are the words “Hic verbum caro factum est.”   “Here the Word was made flesh.”

This sacred basilica is, of course, the focus of our Holy Land pilgrimage to Nazareth.  But there is another place just outside the ancient center of the town which makes for a fascinating visit.  An American Christian organization bought a piece of property to make a first century, living history site called Nazareth Village.  As they cleared the site, they discovered a first century wine press cut into the bedrock, proving that this had been a vineyard on the outskirts of town in the time of Jesus.  Who knows – perhaps Jesus, Joseph or Mary picked the grapes grown here or perhaps purchased them to make their own wine.

Today, the site has been restored to agriculture and crafts as practiced in the first century.  Grapes and Olives are being raised.  Sheep are grazed.  There is a first century carpenter’s shop so we can see the kind of tools and processes that would have been familiar to Joseph and Jesus.  We see a woman spinning wool and making yarn as Mary would have done.  We even have here a first century meal in a reconstructed first century tavern.

Visiting Nazareth village provides a rich experience of connecting with the humanity of Jesus, Joseph and Mary.  We stop here on every Holy Land pilgrimage with the Crossroads Initiative.

We spent much time here filming episodes from Jesus, the Way the Truth and the Life.