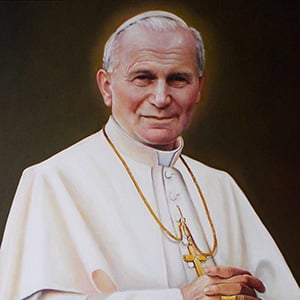 Karol Wojtyla, otherwise known as Pope John Paul II, was certainly one of the most widely talented and broadly experienced men ever to have occupied the chair of St. Peter. Born in 1920 to a devout Polish family of the town of Wadowice, Pope John Paul II endured the loss of his mother at age 9, the death of his only brother a few years later, and, amidst the horrors of the Nazi occupation, finally his beloved father. In the face of such tragedy, many would indulge in self-pity and would preoccupy themselves with self-preservation. Adversity had the opposite effect on Karol Wojtyla. He responded to it by giving of himself still more generously. And so, in his twenties, amidst forced labor in a quarry under the German conquerors, Karol entered a clandestine seminary and continued his studies under the oppression of the Communist “liberators.” Actor, athlete, philosopher, professor, pastor, and disciple, he became first a priest in 1946. He became chaplain to the students of the University of Cracow, who affectionately called him “Lolek.” He built a true community among them, frequently hiking and kayaking with them in the Polish countryside. He was in the middle of a kayaking trip with his students when he got the news that he had been named the youngest Polish auxiliary bishop of modern history (at age 38). It was in this capacity that the future Pope John Paul II traveled to Rome in 1962 to attend the first session of the Second Vatican Council. His holiness and brilliance being impossible to hide, he caught the eye of Pope Paul VI and was named Cardinal Archbishop of Cracow in 1967. Eleven years later, in October 1978, the world was stunned when he was elected the Successor of Peter, the first Polish Pope. His support for the Solidarity trade union and his visits as pope to his native land, enslaved by communism, is credited by many as the beginning of the end of the Soviet Communist empire in Eastern Europe. The new, creative initiatives of this extraordinary Pope are many – World Youth Day, the World Meeting of Families, Divine Mercy Sunday and devotion, the innovating way of explaining human sexuality known as the theology of the body. In the history of the papacy, no Pope has traveled more extensively or has written more profusely than Pope John Paul II. Only Pius IX and St. Peter himself pastored the universal church as long as he. While all previous popes of the twentieth century combined canonized 98 saints, Pope John Paul II himself canonized 464 saints during the course of his pontificate. Many have suggested that someday Pope John Paul’s name will be followed by “the Great,” an honor bestowed by popular acclamation upon only two prior popes, Popes St. Gregory I and St. Leo I. Biography by Dr. Italy Photograph by Zkoty1953. CC 3.0.