Saint Agnes was a young girl of only 12 years of age who was martyred in Rome during the latter half of the third century or at the beginning of the fourth century, during the fierce persecution of Diocletian. Pope Damasus (ca. 380) honored her tomb, decorating it with sacred poetry. Many of the Fathers of the Church, following St. Ambrose, have written of her with great devotion.  Here is an excerpt from a homily by St. Ambrose on the feastday of St. Agnes, January 21.

There was little or no room in that small body for a wound. Though she could scarcely receive the blow, she could rise superior to it. Girls of her age cannot bear even their parents’ frowns and, pricked by a needle, weep as for a serious wound. Yet she shows no fear of the blood-stained hands of her executioners. She stands undaunted by heavy, clanking chains. She offers her whole body to be put to the sword by fierce soldiers. She is too young to know of death, yet is ready to face it. Dragged against her will to the altars, she stretches out her hands to the Lord in the midst of the flames, making the triumphant sign of Christ the victor on the altars of sacrilege. She puts her neck and hands in iron chains, but no chain can hold fast her tiny limbs. 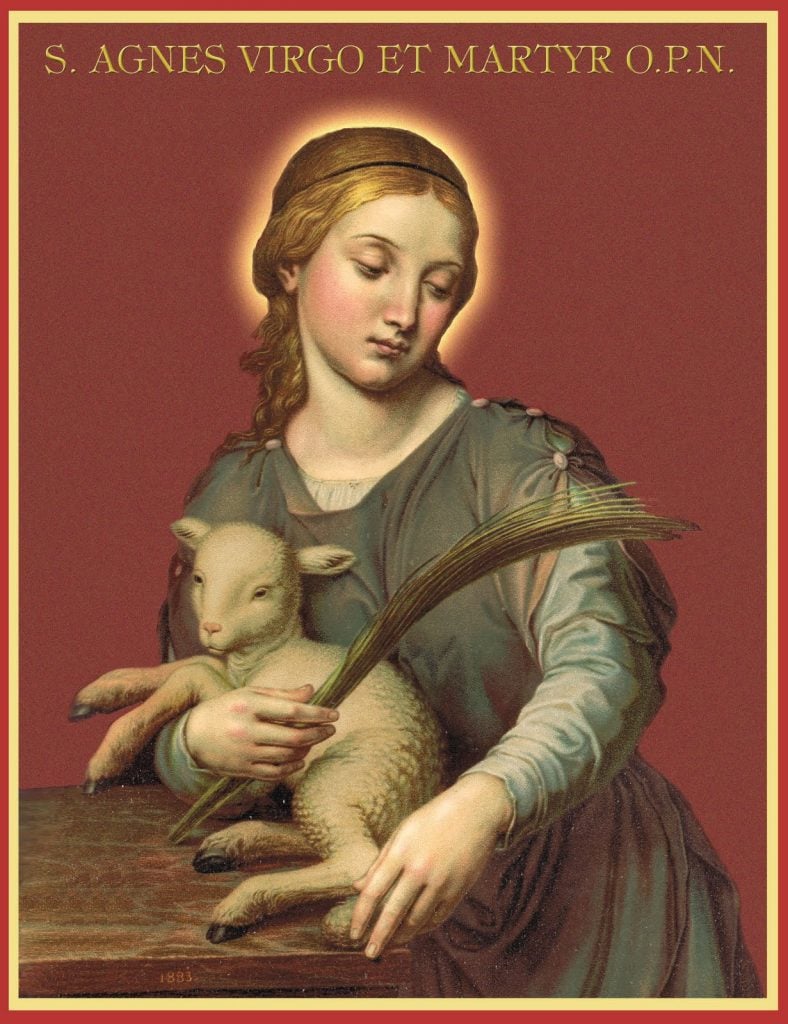 A New Kind of Martyr & Martyrdom

A new kind of martyrdom! Too young to be punished, yet old enough for a martyr’s crown; unfitted for the contest, yet effortless in victory, she shows herself a master in valour despite the handicap of youth. As a bride she would not be hastening to join her husband with the same joy she shows as a virgin on her way to punishment, crowned not with flowers but with holiness of life, adorned not with braided hair but with Christ himself.

In the midst of tears, she sheds no tears herself. The crowds marvel at her recklessness in throwing away her life untasted, as if she had already lived life to the full. All are amazed that one not yet of legal age can give her testimony to God. So she succeeds in convincing others of her testimony about God, though her testimony in human affairs could not yet be accepted. What is beyond the power of nature, they argue, must come from its creator.

What menaces there were from the executioner, to frighten her; what promises made, to win her over; what influential people desired her in marriage! She answered: “To hope that any other will please me does wrong to my Spouse. I will be his who first chose me for himself. Executioner, why do you delay? If eyes that I do not want can desire this body, then let it perish”. She stood still, she prayed, she offered her neck.

You could see fear in the eyes of the executioner, as if he were the one condemned; his right hand trembled, his face grew pale as he saw the girl’s peril, while she had no fear for herself. One victim, but a twin martyrdom, to modesty and to religion; Agnes preserved her virginity, and gained a martyr’s crown.

This excerpt is from a treatise On Virgins by Saint Ambrose (Lib 1, cap. 2.5 7-9: PL 16 [edit. 1845], 189-191).  It appears in the Roman Office of Readings for the liturgical memorial of Saint Agnes on January 21. St. Agnes, whose name in Latin means “lamb,” is often depicted in sacred art with the animal that bears her name and which symbolizes all disciples who follow the Shepherd’s voice.

St. Ambrose of Milan’s life (Sant Ambroggio di Milano in Italian) is a particularly fascinating story. St. Ambrose was born around AD 339 in what is now Trier, Germany, the son of the Roman prefect of Gaul. Following his father’s footsteps, Ambrose embarked upon a career in law and politics and by 370, he had become the Imperial governor of Northern Italy. When the episcopal see of Milan became vacant in 374, the people demanded that Ambrose be made their bishop. The neighboring bishops and the Emperor convinced him to accept this call as the will of God, and so the catechumen Ambrose was baptized and ordained deacon, then priest, then bishop, all in a single week!  This politician-turned churchman was profoundly aware of his lack of preparation for this great responsibility and so set himself immediately to prayer and the study of Scripture. His deep spirituality and love of God’s Word married together with the oratorical skill acquired in law and politics made Ambrose one of the greatest preachers of the early church. St. Ambrose proved to be a fierce opponent of heresy, paganism, and hypocrisy. He battled to preserve the independence of the Church from the state and courageously excommunicated the powerful Catholic Emperor Theodosius I for a massacre of innocent civilians in Thessalonica.  Ambrose also had a significant impact on sacred music through the composition of hymns and psalm tones that are known to this day as Ambrosian chant. Besides numerous sermons and treatises on the spiritual life, Saint Ambrose is responsible for two of the first great theological works written in Latin, De Sacramentis on the Sacraments and De Spiritu Sancto on the Holy Spirit. Around 385, an ambitious professor of public speaking named Augustine came to hear Saint Ambrose preach in order to study his technique, and in the process, was attracted to the Catholic faith. In 386 Augustine was baptized by Ambrose and went on to become bishop of Hippo in North Africa. Ambrose and his pupil, Augustine, together with St. Jerome and St. Gregory the Great, make up the four original Doctors of the Latin Church. Saint Ambrose, one of the most important of the Early Church Fathers, died on Holy Saturday (April 4) in the year 397. His feast day in the Roman calendar is December 7, the day he was ordained bishop. From the Roman liturgy for the Feast of St. Ambrose: “Lord, you made Saint Ambrose an outstanding teacher of the Catholic faith and gave him the courage of an apostle. Raise up in your Church more leaders after your own heart, to guide us with courage and wisdom. We ask this through our Lord Jesus Christ, your Son, who lives and reigns with you and the Holy Spirit, one God forever and ever. Amen.”  Biography by Dr. Italy For more on St. Ambrose and other Early Church Fathers, see When the Church was Young: Voices of the Early Fathers by Marcellino D’Ambrosio.