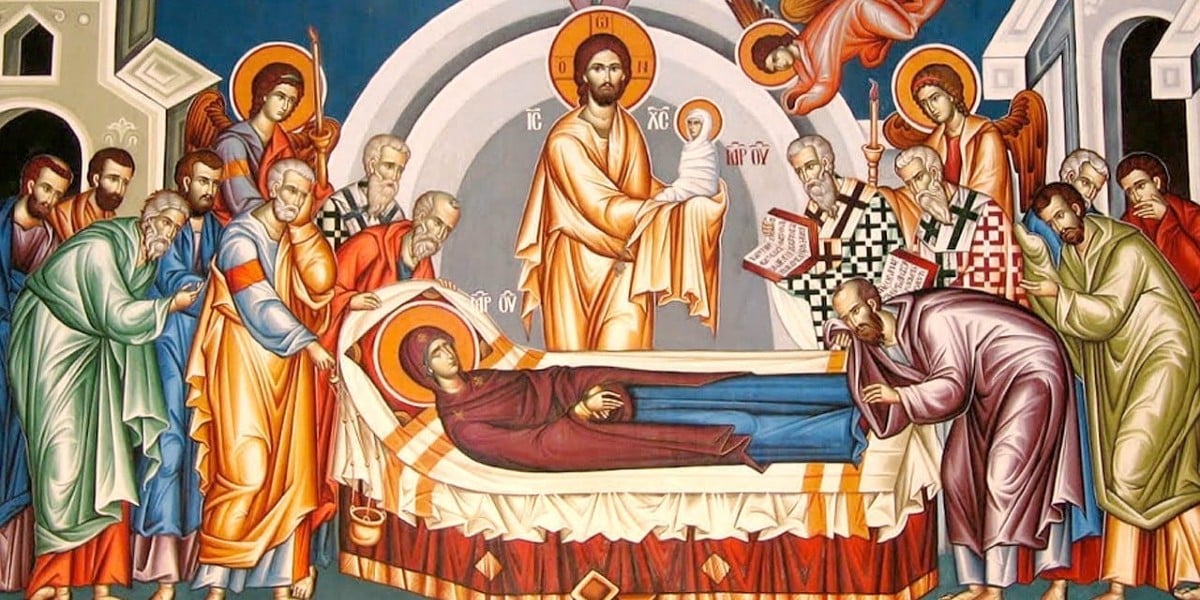 John Damascene is one of the strongest witnesses from the days of the Church Fathers, to the doctrine of the Dormition and bodily Assumption of the Blessed Virgin Mary at the end of her earthly life.  This homily is cited by Pope Pius XII in his definition of the Assumption as a Dogma of faith.

ut even though, according to nature, your most holy and happy soul is separated from your most blessed and stainless body and the body as usual is delivered to the tomb, it will not remain in the power of death and is not subject to decay.

Dormition or Falling Asleep of the Virgin

For just as her virginity remained inviolate while giving birth, when she departed her body was preserved from destruction and only taken to a better and more divine tabernacle, which is not subject to any death . . . Hence I will call her holy passing not death, but falling asleep [dormition] or departure, or better still, arrival. . . .

“Your stainless and wholly immaculate body has not been left on earth; the Queen, the Mistress, the Mother of God who has truly given birth to God has been translated to the royal palaces of heaven. .

“Angels and archangels have borne you upwards, the impure spirits of the air have trembled at your ascension. The air is purified, the ether sanctified by your passing through them. . . the powers meet you with sacred hymns and much solemnity, saying something like this: Who is she that comes forth as the morning rising, fair as the moon, elect like the sun? [cf. Song of Songs 6:9] How you have blossomed forth, how sweet you have become! You are the flower of the field, a lily among the thorns [Song of Songs 2.1] . . .

Not like Elijah have you entered heaven, not like Paul have you been rapt to the third heaven; no, you have penetrated even to the royal throne of your Son himself . . . a blessing for the world, a sanctification of the universe, refreshment for those who are tired, comfort for the sorrowing, healing for the sick, a port for those in danger, pardon for sinners, soothing balm for the oppressed, quick help for all who pray to you. . .

“Good Mistress, graciously look down on us; direct and guide our destinies wheresoever you will. Pacify the storm of our wicked passions, guide us into the quiet port of the divine will and grant us the blessedness to come.”

John Damascene in this 8th century homily teaches on the dormition or Assumption of the Virgin Mary into heaven.  He assumes the most ancient view and majority opinion among theologians today, that Mary died or “fell asleep” before her body was assumed into heaven and re-united with her soul in glory.  When Pope Pius XII defined the dogma of the Assumption in 1950, he deliberately left open the question of whether or not the Virgin died before being assumed to heaven leaving theologians to hold either opinion on the matter.

For more on the Dormition of the Virgin Mary, see the August 15 ASSUMPTION OF MARY section of the Crossroads Initiative Library.

The life of St. John Damascene (also known as Saint John of Damascus) began around 675 AD, already a generation after the area had been conquered by Muslim armies. Saint John Damascene was born into a rich family and spent the early years of his adult life serving as the official representative of the Christian community to the Muslim Caliph. He later abandoned this political task to join the monastery of St. Sabas near Jerusalem where he became a priest and ultimately bishop.

St. John Damascene is known as one of the last of the Fathers of the Church. He was a strong defender of the use of images (icons) in Christian worship against the iconoclasts and wrote a book On the Orthodox Faith that sums up the doctrinal heritage of the earlier Greek Fathers. In this great synthesis we find a systematic treatment of the central Christian doctrines, especially the Trinity, Creation, and the Incarnation. St. John Damascene’s treatment of the Sacraments is also extensive, and his emphasis on the real bodily presence of Jesus in the Eucharist is very strong. Notable too in his teaching is a fully developed doctrine of the Blessed Virgin Mary including her perpetual virginity, her freedom from sin throughout the whole of her life, and her bodily assumption into heaven.

St. John Damascene’s influence on later theology was considerable indeed. In the Latin Middle Ages, he was known to Peter Lombard and St. Thomas Aquinas. All throughout the Middle Ages his works were known and widely used by Eastern Christian Theologians, especially the Slavs. He died around the year 749 AD and was declared a Doctor of the Church by Pope Leo XIII in 1890. Biography by Dr. Italy