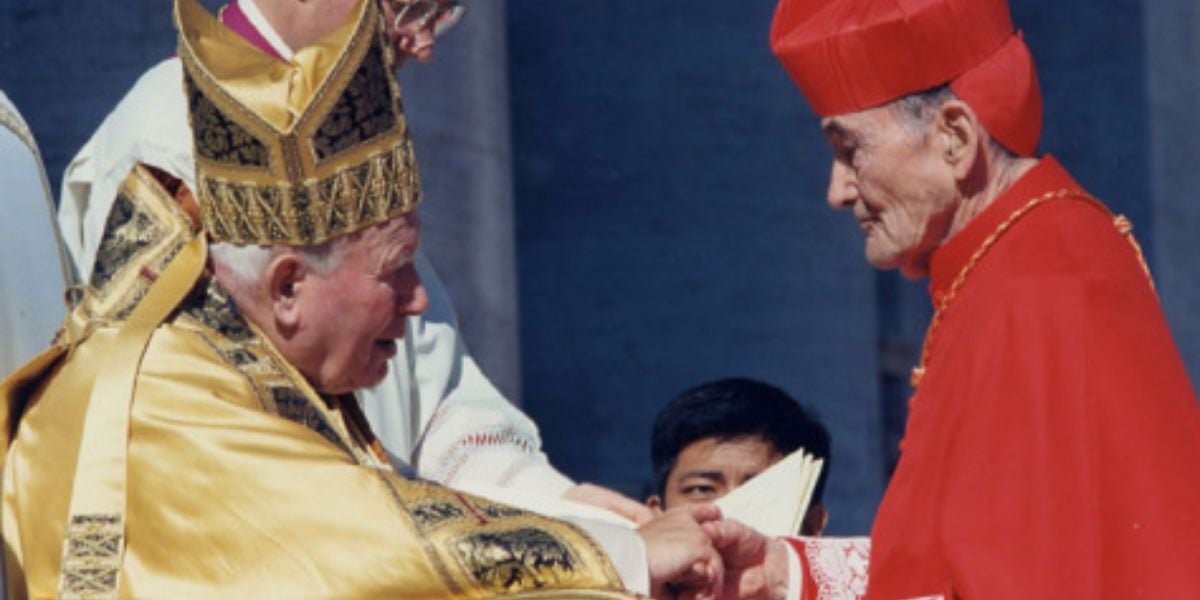 A tribute to Avery Cardinal Dulles, S.J., from Marcellino D’Ambrosio, one of his doctoral students.  The author notes Dulles’ commitment to holiness and discipleship first as the necessary anchor for his work as a theologian.  Dulles was first of all a witness and only secondarily a teacher of theology.

I was thrilled to be accepted to Harvard Divinity School, and even more excited by their very generous scholarship offer.  But I had to turn Harvard down.  Though it had much less prestige, the Catholic University of America had Avery Dulles on its faculty in 1978, and so for me, it was the only place to study theology.

I first encountered Avery Dulles in high school, shortly after my own religious awakening.  Unlettered and fresh from years as a rock musician, I dared to pick up an article written by the then Fr. Dulles.  I was amazed that it was actually comprehensible, intellectually stimulating, and spiritually edifying.  As I entered college and began reading other theologians, I came to appreciate how unique Dulles was.  Few could explain complex concepts so clearly and integrate faith and reason so successfully, in language that anyone could understand. When I discerned a vocation to teach, I decided to study with a teacher I wanted to emulate.

There were many things about Avery Dulles, however, that I could never imitate.   Son of John Foster Dulles, Eisenhower’s secretary of state, Dulles was a blue blood, scion of a prominent WASP family.  I was a cradle Catholic from immigrant stock.  I was excited, animated, and enthusiastic; Dulles was even-keeled, analytical, and deadpan in his delivery.  In fact many students referred to him as Avery Dullest.  But for me, every lecture was riveting because of its clarity, depth and spiritual integrity.

I will always be grateful to Dulles for introducing me to two of the greatest theologians of the twentieth century, Hans Urs von Balthasar and Henri de Lubac.  In fact, Dulles had much in common with these theological luminaries. Like de Lubac and von Balthasar, Avery Dulles was vastly prolific as an author, penning over 700 articles and 26 books over his long life.

Curiously, von Balthasar and de Lubac were both pegged as “liberals” early in their career.  The same was true of Dulles.  Some thought his most famous book, Models of the Church, granted license to pick one’s own favorite model of the Church.  This, of course, is completely contrary to Dulles’ main point.  The Church is a supernatural mystery.  As such, it can never be adequately described by any human image or model.  There may be a master image that appeals to you, says Dulles, but you must always critique, enlarge, and complete it by reference to the other images presented by Scripture and Tradition.  Such an approach is actually Thomistic, leaning on St. Thomas Aquinas’ doctrine of analogy.  As such, it is entirely traditional.

Come to think of it, “traditional” is the best word to describe Dulles.  Henri de Lubac drew a very helpful distinction.  Traditional, he said, means fidelity to the heritage of the Church in its most vital moments – the scriptures, fathers, doctors, liturgies and saints.  Conservative, said de Lubac, means commitment to the status quo, to the style and forms of the Catholic culture immediately inherited from the last generation.

For de Lubac and von Balthasar, tradition is not a dead weight of anachronistic customs, but a fertile source of new life, a creative and even revolutionary reality.  Yet traditional is the antithesis of innovative.  Neither von Balthasar, de Lubac nor Dulles ever aspired to be “creative.”  They desired, rather, to be faithful.  Yet to be traditional means to be creative in one’s fidelity, since tradition is alive and vital.  And so creative each of them proved to be.

Avery Dulles was most creative in his teaching on the theology of Tradition, successfully showing why Tradition must necessarily be recognized alongside sacred Scripture as a distinct vehicle by which Revelation is passed down to us.  Using Michael Polanyi’s concept of “tacit knowledge” as well as Maurice Blondel’s notion of “Action”, Dulles makes plain that some of what we know can never be reduced to words, especially to written words.  Much is known only through action and lived experience and can only be passed down in exactly the same way.

Many think, approvingly or disapprovingly, that Dulles became increasingly conservative with age.  Nothing could be further from the truth.  Avery Dulles was extraordinarily consistent from the time of his conversion to Catholicism in the forties to his passing on Dec 12, 2008.  It was not Dulles – or von Balthasar and de Lubac—who changed but rather the times.  The wooden conservatism of the fifties gave way to a post-conciliar free-for-all in which the commitment to the modern world and its agenda overshadowed fidelity to the deposit of the faith.  Throughout all the turmoil, Dulles was ever the same.

Von Balthasar, in his essay “Theology and Sanctity,” pointed out that, up until Aquinas and Bonaventure, theologians were usually saints. The decline of theology beginning in the 14th century paralleled the increasing detachment of theology from spirituality.  It was Avery Dulles who drew my attention to this article, and who showed me by his example that this sad alienation could be overcome even in our very secular age.

When I arrived at Catholic University Graduate School of theology in 1978, all was not well.  The arid air of the enlightenment made it difficult for my spiritual lungs to breath.  Fr. Dulles was like a breath of fresh air.  Despite his erudition, he was disarmingly simple, prayerful and humble.  A saint takes God seriously, but does not take himself very seriously.  Avery Dulles never ceased to poke fun at himself.  And despite the relentless parade of publications, talks, and regular classes, he was never too busy for anyone.  Though he left Catholic University for Fordham just as I was beginning my dissertation, he insisted on continuing as my director, as if he did not have enough work to do!  Despite an impossible schedule, he wouldn’t miss driving to Baltimore to concelebrate our wedding Mass in May of 1985.

Paul VI said that the modern world does not want teachers, but witnesses.  If it does listen to teachers, it is only because they are first of all witnesses.

Perhaps this is why Pope John Paul II raised priest theologian Avery Dulles to the College of Cardinals, as he had raised de Lubac and von Balthasar before him.  This was more than a stamp of approval for a theological corpus that exemplifies creative fidelity.  Rather, it is a recognition that this Jesuit prayerfully lived what he taught, and thus was a witness in life as well as in word, to Jesus, the way, the truth, and the life.

Dr. Marcellino D’Ambrosio earned a doctorate in Historical Theology under Cardinal Avery Dulles at the Catholic University of America in 1991, having studied with Dulles since 1978.  His dissertation, directed by Dulles, was on the Traditional Hermeneutic of the Fathers of the Church and Medieval Doctors as investigated and described in the writings of Henri Cardinal de Lubac.