Blessed the Poor in Spirit – Leo the Great

Leo the Great, comments on the first of the Beatitudes “blessed are the poor in spirit.”  He makes clear that it is not economic poverty that is blessed, but that poverty of spirit called humility expressed in generosity to others and detachment from the riches of this world.

B Blessed, he says, are the poor in spirit, for theirs is the kingdom of heaven.

It might have been unclear to which poor he was referring, if after the words “blessed are the poor,” he had not added anything about the kind of poor he had in mind. For then the poverty that many suffer because of grave and harsh necessity might seem sufficient to merit the kingdom of heaven.

Blessed are the Poor in Spirit

But when he says: Blessed are the poor in spirit, he shows that the kingdom of heaven is to be given to those who are distinguished by their humility of soul rather than by their lack of worldly goods.

There is no doubt that the poor find it easier than the rich to receive the blessing of humility; for gentleness goes with poverty just as pride more commonly goes with riches. Nevertheless, very many rich people find that their wealth does not swell them up with pride: rather, they do good and benevolent things with it. For these people the greatest treasure is what they spend in relieving the distress and hardship of others.

In the virtue of humility men of every kind and every standing meet together, because though they differ in their means they share a common purpose. Their inequality of wealth makes no difference if they are equal in spiritual blessings.

What kind of poverty, then, is blessed? The kind that is not in love with earthly things and does not seek worldly riches: the kind that longs to be filled with the blessings of heaven.

Apostles as Models of Spiritual Poverty

After our Lord himself, the Apostles have given us the best example of this greatness of heart in poverty. When their Master called, they instantly left behind all that they possessed, and from catching fish they turned swiftly to fishing for men. Their example inspired many to emulate their faith and so become like them: it was at this time that these first sons of the Church were of one heart and there was one spirit among believers. With all their possessions stripped away, they received the riches of eternal blessings, and through the Apostles’ preaching they rejoiced at having nothing that the world could give and possessing all things with Christ. 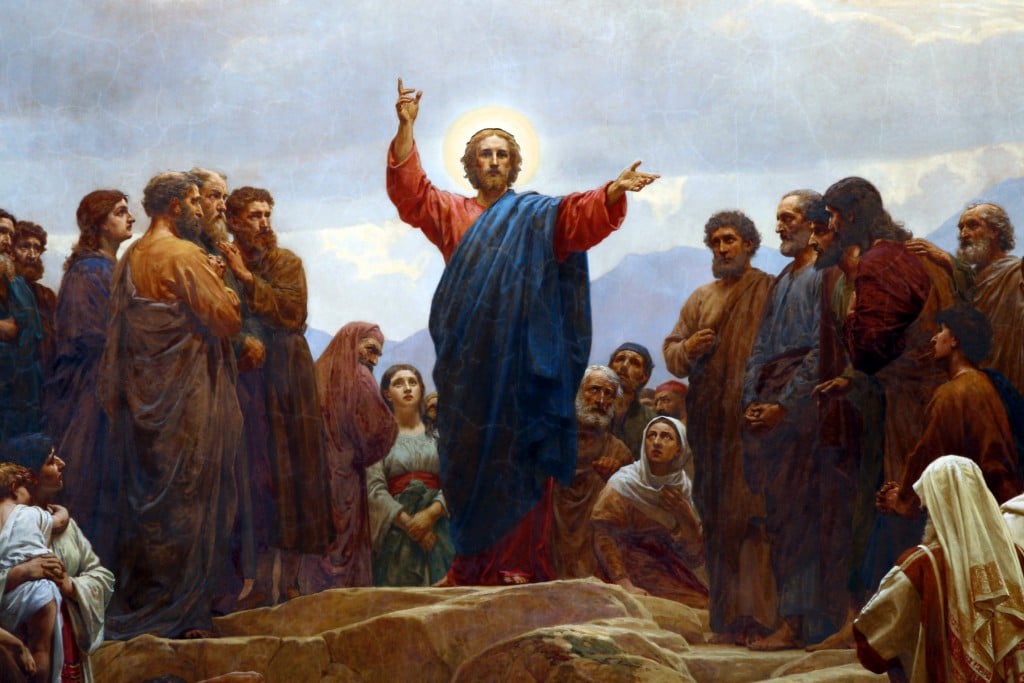 So it was that when the blessed apostle Peter was going up into the Temple and the cripple begged him for alms, he replied I have neither silver nor gold, but I will give you what I have: in the name of Jesus Christ the Nazarene, walk!

The man who was given the power to walk was not the only one to receive help from this rich treasure. From the same act of miraculous healing five thousand men received the gift of faith in the Apostle’s teaching. The poor man who could give nothing of what he was asked for restored one lame man to his feet but also healed the hearts of thousands: he found them lame and brought them to be lithe and agile in Christ.

This post on the first beatitude “blessed are the poor in spirit” is an excerpt from St. Leo’s Sermon 95 on the Beatitudes (verses 2-3: PL 54, 462).  It is used in the Roman Office of Readings for Friday of the 22nd week in Ordinary Time.  The picture above of Christ giving the Sermon on the Mount is an Altar painting from a church in Copenhagen.