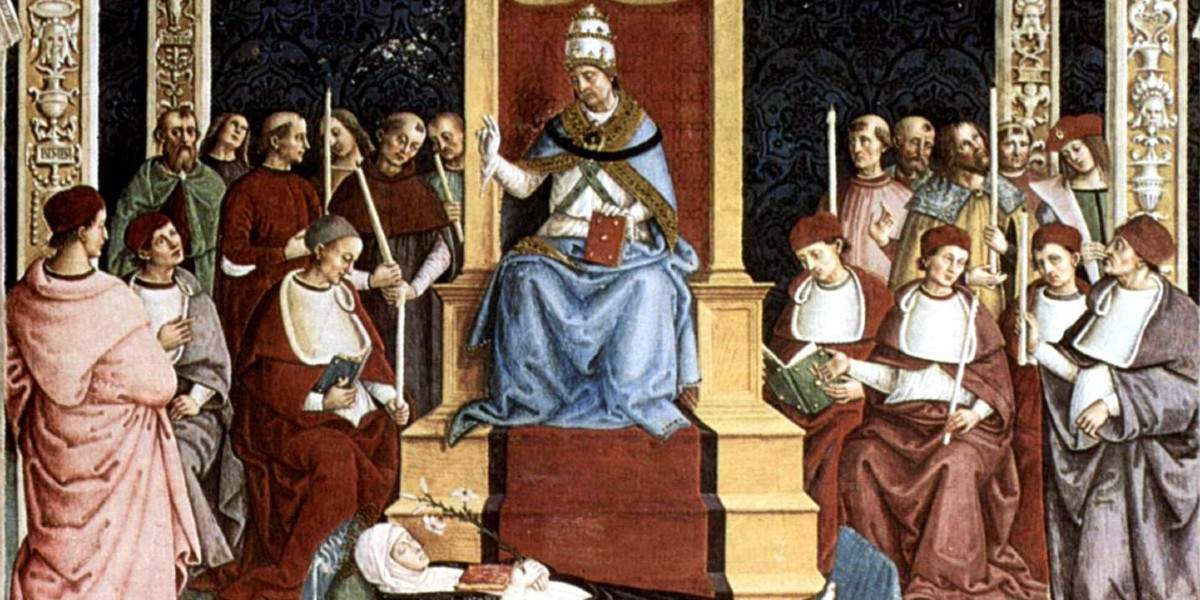 Canonization: How it Works and What it Means

Home > Saints  > About Saints  > Canonization: How it Works and What it Means
Dr. Marcellino D'Ambrosio

The veneration of saints is a feature o Catholic and Orthodox Christianity that fascinates some and bewilders others.  In this article, Dr. Italy explains the process of the Making of a canonized Saint or Canonization in the Catholic Church: How it works, what it means and what part the Pope plays in the process.

Santo subito! Santo subito! During the funeral of Pope John Paul II, this cry, meaning “sainthood now!” in Italian, rippled through the crowd gathered to honor the memory of a man who in their minds was unquestionably a saint.

At least one of the Cardinals agreed, and fortunately he happened to be one elected to succeed the beloved Polish Pope. On May 13, 2005, Pope Benedict XVI decided to waive the five year waiting period normally required by canon law before proceedings could begin. On June 28, the eve of the Feast of Sts. Peter and Paul, it was announced that formal “cause” or canonization process for Pope John Paul II had been opened.  It was  only a few months after his death.

This wonderful decision raises a few questions, though–how does this process work and what precisely does it mean?

First of all, note that the process has not always worked the same way throughout the history. During the first few Christian centuries, all understood that those who gave their lives in martyrdom had exhibited the same charity that led the Lord to lay down His life for His sheep. It was apparent to the faithful that such holy ones who were most certainly enjoying the vision of God in heaven. The Eucharist was celebrated grave-side by the bishop each year on the anniversary of martyrdom and the martyr was often mentioned each Sunday in the Eucharistic prayer.

These acts of the bishop constituted his official approval of devotion to the saint. Depictions of such saints with halos, which signify heavenly glory, began to adorn churches, catacombs, and private homes. The relics of such saints were venerated. Often martyrs honored in one local Church, such as Rome, came to be honored in other dioceses as well. Soon those who suffered for Christ but not to the point of death, known as confessors, were also so honored. Before long even those who did not suffer persecution out nonetheless lived out the “white martyrdom” of extraordinary virtue were also acclaimed as saints.

As devotion to particular saints spread from their local churches to the church universal, the Pope recognized his duty to get involved in the process. Pope John XV was the first to officially canonize a saint to be recognized by the universal Church in 993. Two hundred years later, Pope Alexander II taught that only the Pope should assume the authority to proclaim someone a saint. Finally in the 13th century, a formal process of canonization was instituted which has, with modifications by several popes, come down to us today.

Today’s Process based on Canon Law

The process, according to our current canon law, goes like this. After the death of someone of outstanding holiness, there is a five year waiting period before the process or “cause” can formally begin. At this point, the candidate is referred to as “the Servant of God.”

When the waiting period is over, the bishop from the diocese of the candidate may begin the process of compiling biographical reports about the Servant of God as well as his or her writings and sending the usually large dossier off to the Vatican where a special department of the Pope’s Curia called the Congregation for the Doctrine of the Saints evaluates the data to judge whether the teaching of the Servant of God is orthodox and his or her character exhibits heroic virtue. If the judgment is in the affirmative, the person becomes known by the title of “Venerable.”

Next, evidence is examined to judge whether an authentic miracle can be attributed to the intercession of this Venerable Servant of God. If the answer is yes, then the way is clear for the Pope to proclaim the person “Blessed.” Finally, if a second miracle is judged to have resulted from the person’s intercession, the way would be open for the Pope to canonize the candidate, proclaiming him or her to be a “saint.” It should be pointed out that in the case of martyrs, the requirement for miracles are waived.

The process is ordinarily lengthy. In the case of Mother Teresa of Calcutta who had few writings, it took four years to proclaim her Venerable and then Blessed. In the case of Pope John Paul II whose writings are voluminous, it took an enormous amount of work since every single word he ever wrote had to be examined.  Still, it is remarkable that all this was completed for him to be canonized on April 27, 2014, only nine years after his death.  The cry of “santo subito” became an answered prayer.

But the most important question is what does it mean for the Church to beatify (proclaim “Blessed”) or canonize someone?

First of all, we have to get one thing clear. A papal proclamation of beatification or canonization does not make someone holy or obtain his or her entrance into heaven. The Holy Spirit is the one who does the sanctifying and it is the Lord Jesus who welcomes a saint into heavenly glory. There are many saints enjoying the beatific vision after lives of heroic virtue who are not and probably never will be formally canonized. That’s why we celebrate All Saints Day on November 1. 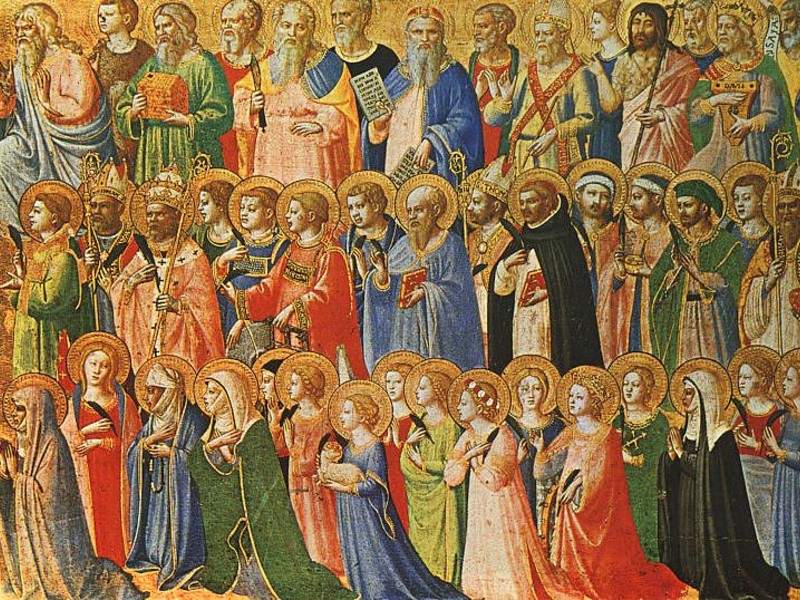 Image by By Pinturicchio, Public Domain.

So the acts of the Pope are not intended to benefit the saint in question, but rather us who are still saints in training. We need intercessors and models of authentic holiness. It would be very unfortunate indeed if through the misguided zeal of some parish liturgical committee or pastor, a person was publicly held up as a model and intercessor in art, liturgy and preaching, who was in fact erroneous in his or her teaching and a bad example in terms of character. So it is unlawful in the Catholic Church for anyone to be proposed for imitation or public veneration in liturgy unless he or she has been formally judged to be “blessed” or a saint.

The practical difference between canonization and beatification is this: a person proclaimed “Blessed” is certainly one who lived the beatitudes and may be venerated publicly in the local or regional Church from which he came. When a person is canonized or proclaimed a saint, however, it is a definitive and infallible judgment by the Successor of Peter that this person is certainly in heaven and may be honored in the liturgy of the Church anywhere in the world. The saint is included in the Church’s official catalogue of saints or “Martyrology,” veneration of the saint’s relics is formally approved, a feast day will be assigned, and churches may be dedicated in his or her name.

Saints in Private Devotion vs. Liturgy

Does this mean that we cannot honor a non-canonized hero in private devotions or seek his or her intercession? If this were the case, the miracles required for beatification or canonization could never occur. Private prayer and devotion, though, is different from the liturgy of the Church which is the property of the entire body of Christ and transmits the Church’s teaching in every prayer uttered and action performed.

Pope John Paul II canonized an extraordinary number of saints-464 in all. In contrast, all other Popes of the 20th century canonized only 98 combined!

Why? Because the saints John Paul II  canonized, drawn from all walks of life and all the countries of the world, manifest the glory of God in unique and marvelous ways. More canonized saints makes it so much easier for each one of us to find a sure and tested model that we can personally identify with, a guide and coach who can help us find our way to heaven and run the race for the gold.

For scriptural verification of saints as role models, see Paul’s comand to “imitate me as I imitate Christ”  in 1 Corinthians 11:1.

For more about the saints or more writings by the saints, see the SAINTS LIBRARY of the CROSSROADS INITIATIVE.