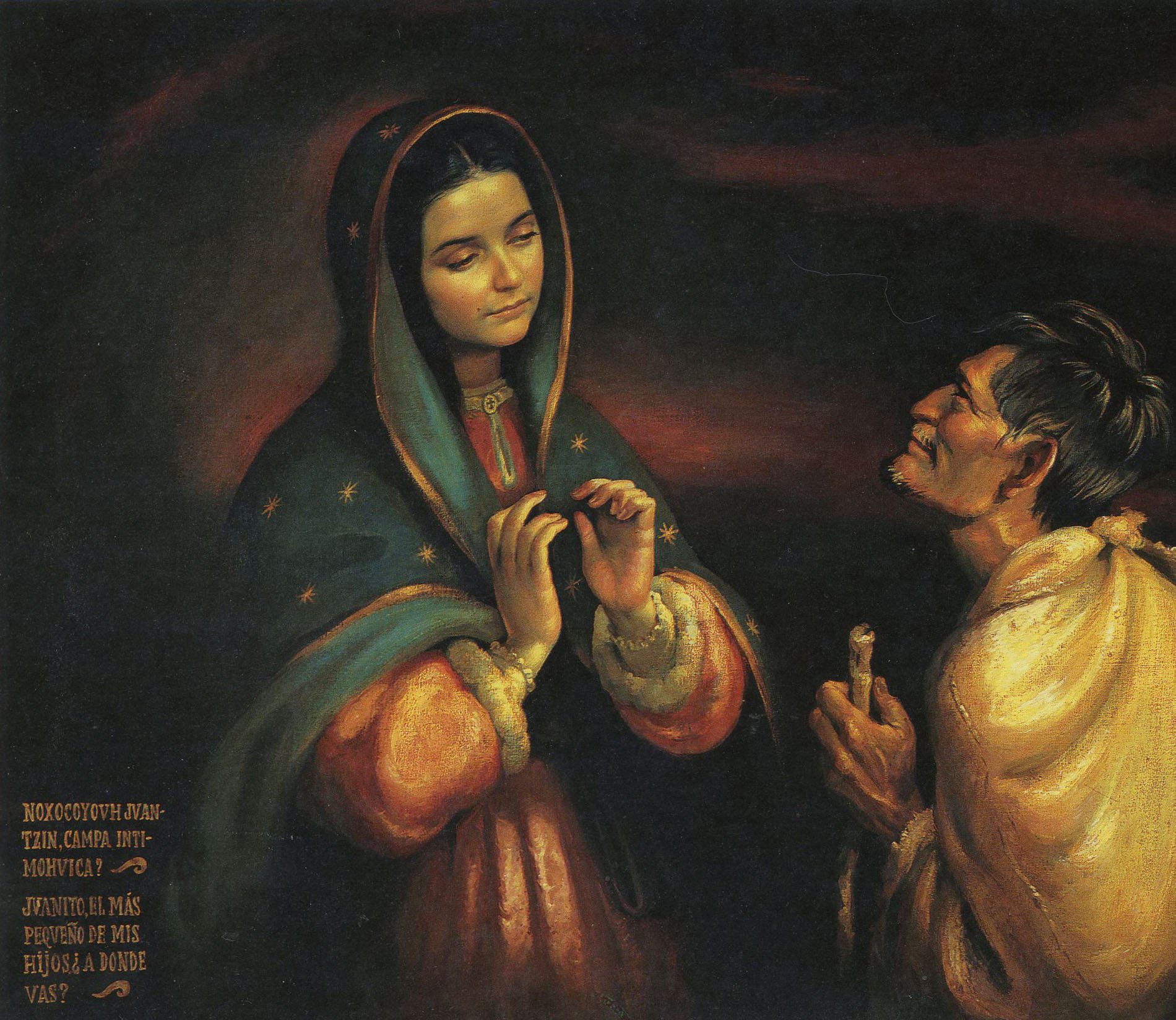 I thank you, Father … that you have hidden these things from the wise and understanding and revealed them to babes; yea, Father, for such was your gracious will” (Mt 11:25-26).

Dear Brothers and Sisters,
These words of Jesus in today’s Gospel are a special invitation to us to praise and thank God for the gift of the first indigenous Saint of the American Continent.
With deep joy I have come on pilgrimage to this Basilica of Our Lady of Guadalupe, the Marian heart of Mexico and ofAmerica, to proclaim the holiness of Juan Diego Cuauhtlatoatzin, the simple, humble Indian who contemplated the sweet and serene face of Our Lady of Tepeyac, so dear to the people of Mexico.

2. I am grateful for the kind words of Cardinal Norberto Rivera Carrera, Archbishop of Mexico City, and for the warm hospitality of the people of this Primatial Archdiocese: my cordial greeting goes to everyone. I also greet with affection Cardinal Ernesto Corripio Ahumada, Archbishop Emeritus of Mexico City, and the other Cardinals, as well as the Bishops of Mexico, of America, of the Philippines and of other places in the world. I am likewise particularly grateful to the President and the civil Authorities for their presence at this celebration.

Today I address a very affectionate greeting to the many indigenous people who have come from the different regions of the country, representing the various ethnic groups and cultures which make up the rich, multifaceted Mexican reality. The Pope expresses his closeness to them, his deep respect and admiration, and receives them fraternally in the Lord’s name.

3. What was Juan Diego like? Why did God look upon him? The Book of Sirach, as we have heard, teaches us that God alone “is mighty; he is glorified by the humble” (cf. Sir 3:20). Saint Paul’s words, also proclaimed at this celebration, shed light on the divine way of bringing about salvation: “God chose what is low and despised in the world … so that no human being might boast in the presence of God” (1 Cor 1:28,29).

It is moving to read the accounts of Guadalupe, sensitively written and steeped in tenderness. In them the Virgin Mary, the handmaid “who glorified the Lord” (Lk 1:46), reveals herself to Juan Diego as the Mother of the true God. As a sign, she gives him precious roses, and as he shows them to the Bishop, he discovers the blessed image of Our Lady imprinted on his tilma.

“The Guadalupe Event”, as the Mexican Episcopate has pointed out, “meant the beginning of evangelization with a vitality that surpassed all expectations. Christ’s message, through his Mother, took up the central elements of the indigenous culture, purified them and gave them the definitive sense of salvation” (14 May 2002, No. 8). Consequently Guadalupe and Juan Diego have a deep ecclesial and missionary meaning and are a model of perfectly inculturated evangelization.

4. “The Lord looks down from heaven, he sees all the sons of men” (Ps 33:13), we recited with the Psalmist, once again confessing our faith in God, who makes no distinctions of race or culture. In accepting the Christian message without forgoing his indigenous identity, Juan Diego discovered the profound truth of the new humanity, in which all are called to be children of God. Thus he facilitated the fruitful meeting of two worlds and became the catalyst for the new Mexican identity, closely united to Our Lady of Guadalupe, whose mestizo face expresses her spiritual motherhood which embraces all Mexicans. This is why the witness of his life must continue to be the inspiration for the building up of the Mexican nation, encouraging brotherhood among all its children and ever helping to reconcile Mexico with its origins, values and traditions.

The noble task of building a better Mexico, with greater justice and solidarity, demands the cooperation of all. In particular, it is necessary today to support the indigenous peoples in their legitimate aspirations, respecting and defending the authentic values of each ethnic group. Mexico needs its indigenous peoples and these peoples need Mexico!

Beloved bothers and sisters of every ethnic background of Mexico and America, today, in praising the Indian Juan Diego, I want to express to all of you the closeness of the Church and the Pope, embracing you with love and encouraging you to overcome with hope the difficult times you are going through.

5. At this decisive moment in Mexico’s history, having already crossed the threshold of the new millennium, I entrust to the powerful intercession of Saint Juan Diego the joys and hopes, the fears and anxieties of the beloved Mexican people, whom I carry in my heart.

Blessed Juan Diego, a good, Christian Indian, whom simple people have always considered a saint! We ask you to accompany the Church on her pilgrimage inMexico, so that she may be more evangelizing and more missionary each day. Encourage the Bishops, support the priests, inspire new and holy vocations, help all those who give their lives to the cause of Christ and the spread of his Kingdom.

Happy Juan Diego, true and faithful man! We entrust to you our lay brothers and sisters so that, feeling the call to holiness, they may imbue every area of social life with the spirit of the Gospel. Bless families, strengthen spouses in their marriage, sustain the efforts of parents to give their children a Christian upbringing. Look with favour upon the pain of those who are suffering in body or in spirit, on those afflicted by poverty, loneliness, marginalization or ignorance. May all people, civic leaders and ordinary citizens, always act in accordance with the demands of justice and with respect for the dignity of each person, so that in this way peace may be reinforced.

Beloved Juan Diego, “the talking eagle”! Show us the way that leads to the “Dark Virgin” of Tepeyac, that she may receive us in the depths of her heart, for she is the loving, compassionate Mother who guides us to the true God. Amen.

After the celebration, before imparting the final blessing the Holy Father said:

At the end of the canonization of Juan Diego, I want to renew my greeting to all of you who have been able to take part, some in this basilica, others in the nearby areas and many others by means of radio and television. I warmly thank all those I have met in the streets for their affection. In this new saint you have a marvellous example of a just and upright man, a loyal son of the Church, docile to his Pastors, who deeply loved the Virgin and was a faithful disciple of Jesus. May he be a model for you who are so attached to him, and may he intercede for Mexico so that it may always be faithful! Take to all Mexicans the message of this celebration and the Pope’s greeting and love for them all!

Karol Wojtyla, otherwise known as Pope John Paul II, was certainly one of the most widely talented and broadly experienced men ever to have occupied the chair of St. Peter.  Born in 1920 to a devout Polish family, Pope John Paul II endured the loss of his mother at age 9, the death of his only brother a few years later, and, amidst the horrors of the Nazi occupation, finally his beloved father.     In the face of such tragedy, many would indulge in self-pity and would preoccupy themselves with self-preservation.  Adversity had the opposite effect on Karol Wojtyla.  He responded to it by deciding to give of himself still more generously.  And so in his twenties, amidst forced labor in a quarry under the German conquerors, Karol entered a clandestine seminary and continued his studies under the oppression of the Communist “liberators.”    Actor, athlete, philosopher, professor, pastor, and disciple, he became first a priest in 1946, then the youngest Polish auxiliary bishop of modern history (at age 38).  It was in this capacity that the future Pope John Paul II traveled to Rome in 1962 to attend the first session of the Second Vatican Council.  His holiness and brilliance being impossible to hide, he caught the eye of Pope Paul VI and was named Cardinal Archbishop of Cracow in 1967.  Eleven years later, in October 1978, the world was stunned when he was elected the Successor of Peter, the first Polish Pope.       In the history of the Papacy, no Pope has traveled more extensively or has written more profusely than Pope John Paul II.  Only Pius IX and St. Peter himself pastored the universal church as long as he.  While all previous popes of the twentieth century combined canonized 98 saints, Pope John Paul II himself canonized 464 saints during the course of his pontificate.  Many have suggested that someday Pope John Paul’s name will be followed by “the Great,” an honor bestowed by popular acclamation upon only two prior popes, Popes St. Gregory I and St. Leo I.