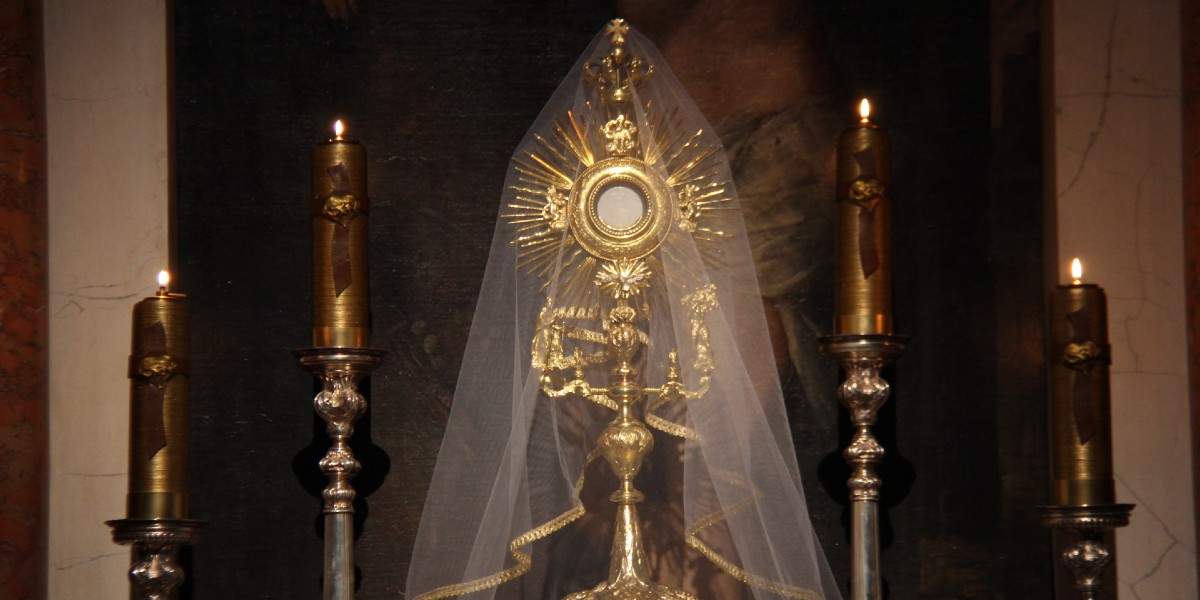 Ambrose, speaking to newly baptized Christians in the fourth century, shows how the reality of the eucharist is the true bread from heaven of which manna was only the symbol and shadow.  It is a heavenly banquet, the abundant table of Psalm 23.

F resh from the [baptismal] waters and resplendent in these garments, God’s holy people hasten to the altar of Christ, saying: I will go in to the altar of God, to God who gives joy to my youth [Psalm 43:4].  They have sloughed off the old skin of error, their youth renewed like an eagle’s, and they make haste to approach that heavenly banquet.

You Have Prepared a Table for Me

They come and, seeing the sacred altar prepared, cry out: You have prepared a table in my sight. David puts these words into their mouths: The Lord is my shepherd and nothing will be lacking to me. He has set me down there in a place of pasture. He has brought me beside refreshing water.

Further on, we read: For though I should walk in the midst of the shadow of death, I shall not be afraid of evils, for you are with me. Your rod and your staff have given me comfort. You have prepared in my sight a table against those who afflict me. You have made my head rich in oil, and your cup, which exhilarates, how excellent it is [Psalm 23].

Eucharist as Manna, Bread from Heaven

It is wonderful that God rained manna on our fathers and they were fed with daily food from heaven. And so it is written: Man ate the bread of angels. Yet those who ate that bread all died in the desert. But the food that you receive, that living bread which came down from heaven, supplies the very substance of eternal life, and whoever will eat it will never die, for it is the body of Christ.

Consider now which is the more excellent: the bread of angels or the flesh of Christ, which is indeed the body that gives life. The first was manna from heaven, the second is above the heavens. One was of heaven, the other is of the Lord of the heavens; one subject to corruption if it was kept till the morrow, the other free from all corruption, for if anyone tastes of it with reverence he will be incapable of corruption.

Symbol To Reality, Shadow to Light

For our fathers, water flowed from the rock; for you, blood flows from Christ. Water satisfied their thirst for a time; blood cleanses you for ever. The Jew drinks and still thirsts, but when you drink you will be incapable of thirst. What happened in symbol is now fulfilled in reality.

If what you marvel at is a shadow, how great is the reality whose very shadow you marvel at. Listen to this, which shows that what happened in the time of our fathers was but a shadow. They drank, it is written, from the rock that followed them, and the rock was Christ.

All this took place as a symbol for us. You know now what is more excellent: light is preferable to its shadow, reality to its symbol, the body of the Giver to the manna he gave from heaven.

Banner/featured Photo by Łukasz Dańczak on Unsplash. Used with permission.

This post on the eucharist as the reality of which manna was only a symbol and shadow is an excerpt from St. Ambrose’s treatise On the Mysteries (nn. 43. 47-9; SC 25 bis, 178-180, 182).  He originally addressed these words on the heavenly banquet to newly baptized Christians around the year 370 AD.  This reading appears in the Roman Office of Readings on Friday of the 15th week in ordinary time.  The accompanying biblical reading is from 2 Chronicles 20:1-9, 13-24.