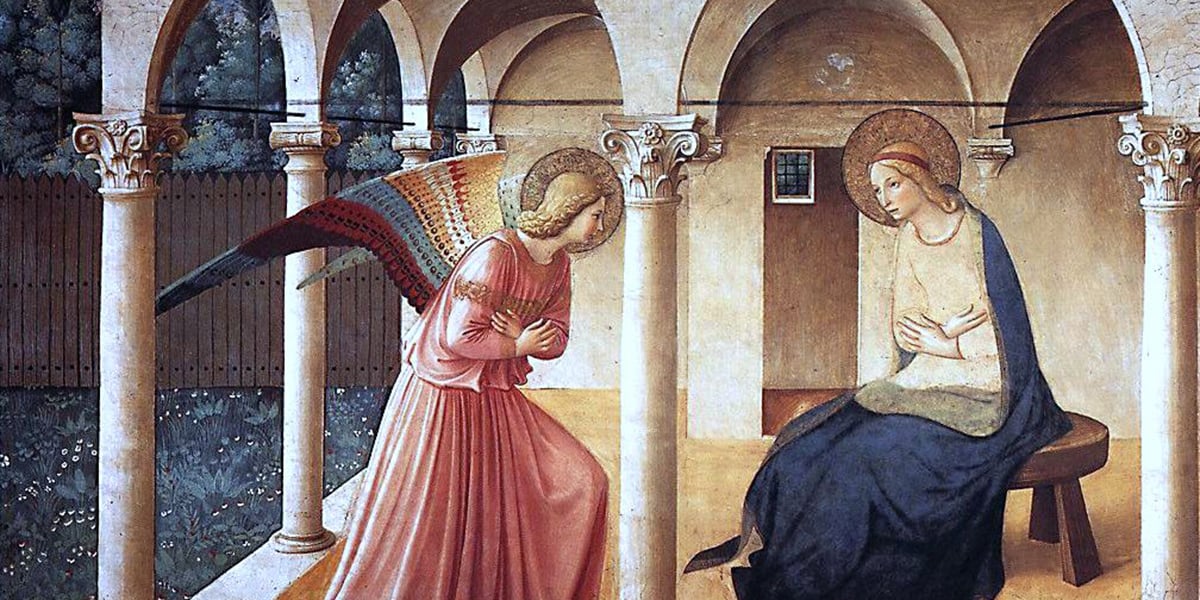 The Solemnity or Feast of the Annunciation of the Lord is celebrated on March 25.  Here, in his typically lyrical language, Leo the Great ponders the unfathomable mystery of God becoming man in the womb of a Virgin, at the moment of conception. Through the Father’s love and Mary’s faith, the divine Word became flesh and dwelt among us, assuming a full human nature.

Lowliness is assumed by majesty, weakness by power, mortality by eternity. To pay the debt of our sinful state, a nature that was incapable of suffering was joined to one that could suffer. Thus, in keeping with the healing that we needed, one and the same mediator between God and men, the man Jesus Christ, was able to die in one nature, and unable to die in the other.

He who is true God was therefore born in the complete and perfect nature of a true man, whole in his own nature, whole in ours. By our nature we mean what the Creator had fashioned in us from the beginning, and took to himself in order to restore it.

For in the Savior there was no trace of what the deceiver introduced and man, being misled, allowed to enter. It does not follow that because he submitted to sharing in our human weakness he therefore shared in our sins.

Thus the Son of God enters this lowly world. He comes down from the throne of heaven, yet does not separate himself from the Father’s glory. He is born in a new condition, by a new birth.

He was born in a new condition, for, invisible in his own nature, he became visible in ours. Beyond our grasp, he chose to come within our grasp. Existing before time began, he began to exist at a moment in time. Lord of the universe, he hid his infinite glory and took the nature of a servant. Incapable of suffering as God, he did not refuse to be a man, capable of suffering. Immortal, he chose to be subject to the laws of death.

He who is true God is also true man. There is no falsehood in this unity as long as the lowliness of man and the pre-eminence of God coexist in mutual relationship.

Two Natures, One Person – Son of God, Son of Man

One nature is resplendent with miracles, the other falls victim to injuries. As the Word does not lose equality with the Father’s glory, so the flesh does not leave behind the nature of our race.

This post on the Annunciation is an excerpt from a letter by St. Leo the Great (Epist. 28 ad Flavianum, 3-4: PL 54, 763-767).  It appears in the Roman Office of Readings for the Feast (Solemnity) of the Annunciation of the Lord.  The gospel reading for the feast is Luke 1:26-38.  It celebrates the truly human nature assumed by the Divine Word made flesh in Jesus Christ.