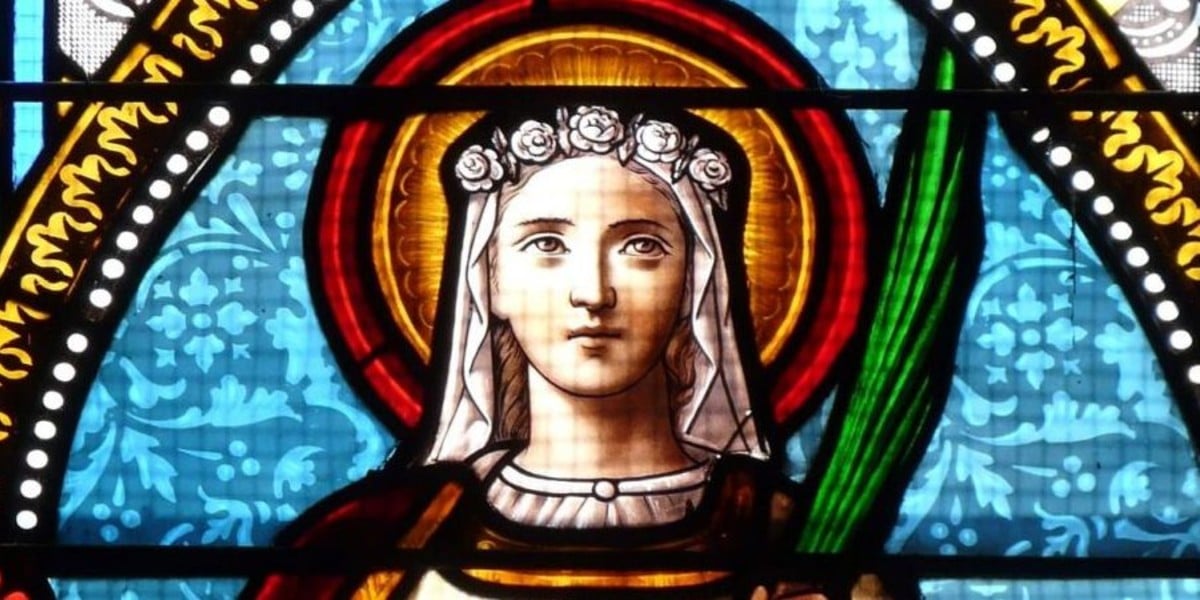 Here Ambrose speaks not of physical light, but rather notes how St. Lucy and other holy virgins light up their grace of body with the radiance and splendor of their souls.  Lucy was martyred at Syracuse in Sicily, probably during the persecution of Diocletian around 305 AD. Her relics were brought to Constantinople and finally to Venice where they lie today in the Church of Santa Lucia. From antiquity devotion to her spread throughout the Church, and her name was therefore introduced into the Roman Canon (Eucharistic Prayer #1). Her name means “light” and reminds us that all Christians are called to reflect the light of Christ to the world. It was natural that she therefore would become the patron saint of the eyes, the “light of the body.” Since her feast occurs during the days of preparation before Christmas, it has traditionally been the day in many countries, especially Sweden and Norway, where Christmas lights are illuminated for the first time in the season. Before the Gregorian reform of the calendar, her feast day on December 13 fell on the shortest day of the year. Therefore “Lucy candles” lighted in the homes and “Lucy fires” burned in the outdoors were a celebration that the tide of darkness and winter was turning with the return of the sun. (bio by Dr. Italy)

Y ou are one of God’s people, of God’s family, a virgin among virgins; you light up your grace of body with your splendor of soul. More than others you can be compared to the Church. When you are in your room, then, at night, think always on Christ, and wait for his coming at every moment.

This is the person Christ has loved in loving you, the person he has chosen in choosing you. He enters by the open door; he has promised to come in, and he cannot deceive. Embrace him, the one you have sought; turn to him, and be enlightened; hold him fast, ask him not to go in haste, beg him not to leave you. The Word of God moves swiftly; he is not won by the lukewarm, nor held fast by the negligent. Let your soul be attentive to his word; follow carefully the path God tells you to take, for he is swift in his passing.

What does his bride say? I sought him, and did not find him; I called him, and he did not hear me. Do not imagine that you are displeasing to him although you have called him, asked him opened the door to him, and that this is the reason why he has gone so quickly; no, for he allows us to be constantly tested. When the crowds pressed him to stay, what does he say in the Gospel? I must preach the word of God to other cities, because for that I have been sent. But even if it seems to you that he has left you, go out and seek him once more.

Who but holy Church is to teach you how to hold Christ fast? Indeed, she has already taught you, if you only understood her words in Scripture: How short a time it was when I left them before I found him whom my soul has loved. I held him fast, and I will not let him go.

Lucy, the Bride who Finds her Beloved in Suffering

How do we hold him fast? Not by restraining chains or knotted ropes but by bonds of love, by spiritual reins, by the longing of the soul.  If you also, like the bride, wish to hold him fast, seek him and be fearless of suffering. It is often easier to find him in the midst of bodily torments, in the very hands of persecutors.

His bride says: How short a time it was after I left them. In a little space, after a brief moment, when you have escaped from the hands of your persecutors without yielding to the powers of this world, Christ will come to you, and he will not allow you to be tested for long.

The Secret place of the Heart

Whoever seeks Christ in this way, and finds him, can say: I held him fast, and I will not let him go before I bring him into my mother’s house, into the room of her who conceived me. What is this “house”, this “room”, but the deep and secret places of your heart?

Maintain this house, sweep out its secret recesses until it becomes immaculate and rises as a spiritual temple for a holy priesthood, firmly secured by Christ, the cornerstone, so that the Holy Spirit may dwell in it.