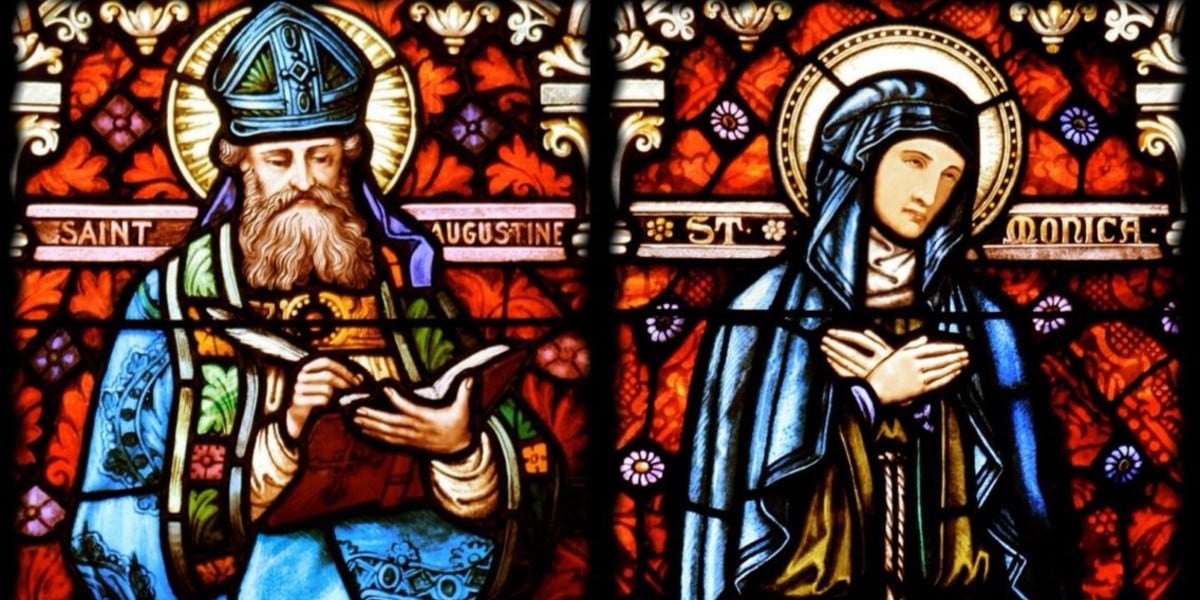 An account of the death of St. Monica, mother of Augustine, written about 10 years afterwards, in her son’s famous book The Confessions.  Read on August 27, feast day of Monica, model of Christian Motherhood.

Because the day when she was to leave this life was drawing near – a day known to you, though we were ignorant of it – she and I happened to be alone, through (as I believe) the mysterious workings of your will.

Augustine and Monica in Ostia

We stood leaning against a window which looked out on a garden within the house where we were staying, at Ostia on the Tiber; for there, far from the crowds, we were recruiting our strength after the long journey, in order to prepare ourselves for our voyage overseas.

We were alone, conferring very intimately. Forgetting what lay in the past, and stretching out to what was ahead, we inquired between ourselves, in the light of present truth, into what you are and what the eternal life of the saints would be like, for Eye has not seen nor ear heard nor human heart conceived it. And yet, with the mouth of our hearts wide open we panted thirstily for the celestial streams of your fountain, the fount of life which is with you.

This was the substance of our talk, though not the exact words. Yet you know, O Lord, how on that very day, amid this talk of ours that seemed to make the world with all its charms grow cheap, she said, “For my part, my son, I no longer find pleasure in anything that this life holds. What I am doing here still, or why I am still here, I do not know, for worldly hope has withered away for me. One thing only there was for which I desired to linger in this life: to see you a Catholic Christian before I died. And my God has granted this to me more lavishly than I could have hoped, letting me see even you spurning earthly happiness to be his servant. What am I still doing here?”

What I replied I cannot clearly remember, because just about that time – five days later, or not much more – she took to her bed with fever. One day during her illness she lapsed into unconsciousness and for a short time was unaware of her surroundings. We all came running, but she quickly returned to her senses, and, gazing at me and my brother as we stood there, she asked in puzzlement, “Where was I?”

We were bewildered with grief, but she looked keenly at us and said, “You are to bury your mother here.” I was silent, holding back my tears, but my brother said something about his hope that she would not die far from home but in her own country, for that would be a happier way. On hearing this she looked anxious and her eyes rebuked him for thinking so; then she turned her gaze from him to me and said, “What silly talk!” Shortly afterwards, addressing us both, she said, “Lay this body anywhere, and take no trouble over it. One thing only do I ask of you, that you remember me at the altar of the Lord wherever you may be.” Having made her meaning clear to us with such words as she could muster, she fell silent, and the pain of the disease grew worse.

St. Monica, model Catholic mother, was born into a Christian family at Tagaste, in what is now Tunisia, on the North African Coast in the early part of the fourth century AD, not long after the Emperor Constantine first legalized Christianity. Her husband, Patricius, appears to have been a pagan. Their son, Augustine, proved to be quite a challenge as passed through his adolescent and early adult years, living with his girlfriend and getting involved in an exotic cult. All throughout, Monica labored in prayer for his conversion. Her prayers were finally answered and her son became a bishop and one of the greatest teachers in the history of the Church. Saint Monica, model of Christian motherhood died in Ostia, Italy, in the company of her beloved son, in 387 AD.  This above excerpt comes from the Confessions of St. Augustine (Lib. 9, 10-11: CSEL 33, 215-129). The selection highlighting her exemplary motherhood appears in the Roman Office of Readings for the Feast (liturgical memorial) of St. Monica on Aug 27th.

St. Augustine of Hippo
St. Augustine, born in Roman N. Africa to a devout Catholic mother and a pagan father, was a notoriously rebellious Catholic teenager who lived with his girlfriend, joined an exotic Eastern cult, and ran away from his mother. Augustine became a brilliant and renowned teacher of rhetoric and was appointed by the emperor to teach in Milan, Italy, at that time the administrative capital of the Western Roman Empire. While there, he happened to hear the preaching of the bishop of Milan, Ambrose, who baptized him at the Easter vigil of AD 386. St. Augustine ultimately renounced his secular career and put away his mistress.  He became first a monk, then a priest, then the bishop of Hippo, a small town on the N. African Coast. The voluminous writings of this Early Church Father span every conceivable topic in theology, morality, philosophy, and spirituality. St. Augustine of Hippo is commonly recognized as the greatest teacher in the Western Church between the New Testament and St. Thomas Aquinas and is one of the Doctors of the Church.  He died in AD 430.  (bio by Dr. Italy).  For more info on Augustine, see When the Church Was Young: Voices of the Early Fathers.