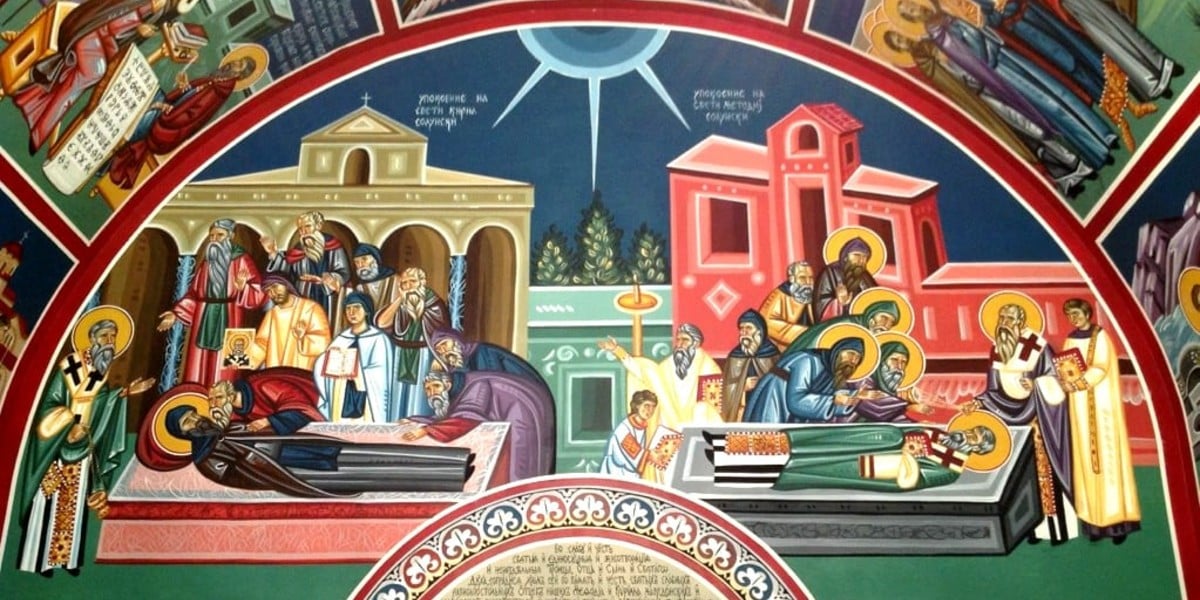 Last Days of Saint Cyril, brother of Methodius, Apostle to the Slavs

St. Cyril, whose feast day is February 14, Valentine’s Day, was born in Thessalonica, baptized under the name Constantine,  and educated in Constantinople. He traveled with his brother Methodius to Moravia to preach the gospel. The brothers collaborated on writing liturgical texts in what would subsequently be known as the Cyrillic alphabet, which is still used today by the Russian language. The brothers were summoned to Rome, where Constantine died on February 14, 869, fifty days after taking the monastic habit and his religious name “Cyril.” Methodius was consecrated bishop and went to Pannonia (eastern Europe) where he energetically preached the Good News of Jesus Christ. Despite harassment from many detractors, Methodius received support from several Popes. He died on April 6, 885, in what is now Velehrad, Czechoslovakia.  The following is an anonymous account of the final days of Constantine’s (Cyril’s) life.

Constantine, already burdened by many hardships, became ill. At one point during his extended illness, he experienced a vision of God and began to sing this verse: “My spirit rejoiced and my heart exulted because they told me we shall go into the house of the Lord”.

Afterward he remained dressed in the vestments that were to be venerated later, and rejoiced for an entire day, saying: “From now on, I am not the servant of the emperor or of any man on earth, but of almighty God alone. Before, I was dead, now I am alive and I shall live for ever. Amen.”  The following day, he assumed the monastic habit and took the religious name Cyril. He lived the life of a monk for fifty days.

When the time came for him to set out from this world to the peace of his heavenly homeland, he prayed to God with his hands outstretched and his eyes filled with tears: “O Lord, my God, you have created the choirs of angels and spiritual powers; you have stretched forth the heavens and established the earth, creating all that exists from nothing. You hear those who obey your will and keep your commands in holy fear. Hear my prayer and protect your faithful people, for you have established me as their unsuitable and unworthy servant.

“Keep them free from harm and the worldly cunning of those who blaspheme you. Build up your Church and gather all into unity. Make your people known for the unity and profession of their faith. Inspire the hearts of your people with your word and your teaching. You called us to preach the Gospel of your Christ and to encourage them to lives and works pleasing to you.

“I now return to you, your people, your gift to me. Direct them with your powerful right hand, and protect them under the shadow of your wings. May all praise and glorify your name, the Father, Son and Holy Spirit. Amen”.

Funeral in Rome, honored by Greeks and Romans

Once he had exchanged the gift of peace with everyone, he said: “Blessed be God, who did not hand us over to our invisible enemy, but freed us from his snare and delivered us from perdition”. He then fell asleep in the Lord at the age of forty-two.

The Patriarch commanded all those in Rome, both the Greeks and Romans, to gather for his funeral. They were to chant over him together and carry candles; they were to celebrate his funeral as if he had been a pope. This they did.

This excerpt from an anonymous Old Slavonic Life of Constantine (St. Cyril) is used in the Roman Office of Readings for the Feast of Sts. Cyril and Methodius on February 14 (Valentine’s Day).