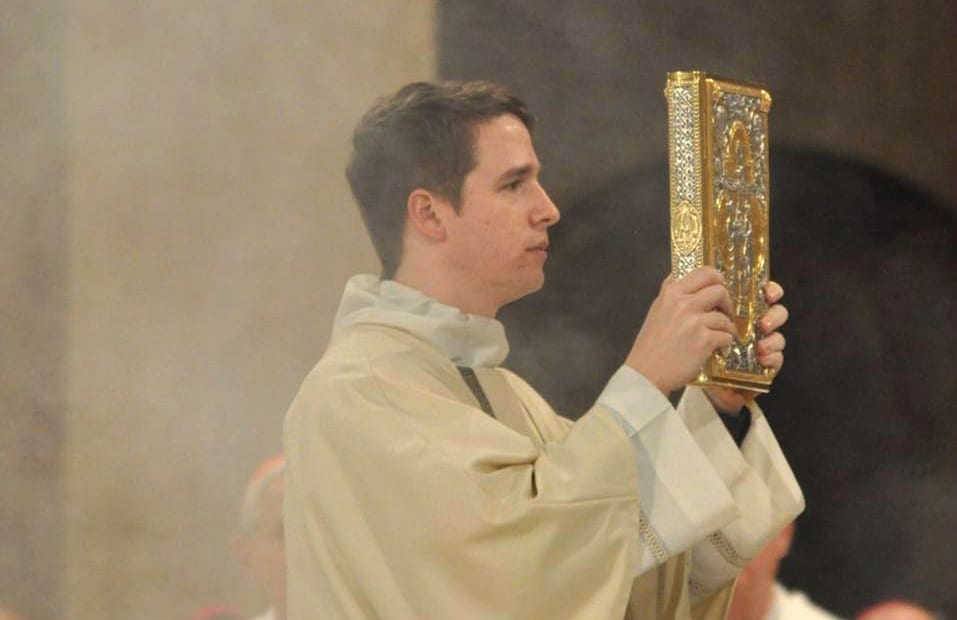 Marcellino D’Ambrosio (Dr. Italy) explains the Catholic Church’s teaching on the Word of God as expounded in the Vatican II document “Dei Verbum” paragraphs 21-26. The ultimate goal of Bible Study is communion with Christ.

Everybody knows the Protestant Church is the religion of the Bible and the Catholic Church is all about the sacraments. Right?

Wrong. The opposition or contrast between Word and Sacrament sets up a false, even impossible, alternative. When you look at most every Catholic liturgical celebration, you’ll find preceding the sacramental rite one or more readings from Scripture. This is especially apparent in the Sunday Eucharist, where a very rich liturgy of the Word precedes the liturgy of the Eucharist.

One of the principal liturgical reforms of Vatican II was the mandate to expand the quantity and variety of readings for Mass, providing a very substantial and balanced diet of the Word of God. In fact Sunday Mass-goers are exposed to most the more important passages of the Bible from Genesis to Revelation over the course of three years (daily Mass-goers get this overview in two years). Actually, when you take a close look at the prayers of the Mass as well as the readings, you see Scripture everywhere. The Gloria starts with a quote from Luke 2, the “Lamb of God” from John 1, the “Holy, Holy” from Isaiah 6, and so on.

It is as if we can’t approach the table of Lord and recognize his true Body and Blood until our faith has been built up by listening to and then responding back with the inspired word of God.

Not only does the Second Vatican Council emphasize the importance of both Word and sacrament in worship, but it ascribes to them the same function – the nourishment of God’s people. In fact, the bread of life and the bread of the word are served to us from the same Eucharistic table, says the final chapter of Dei Verbum.

So it is not an either/or!  The Catholic Church has always “venerated the divine Scriptures as she venerated the Body of the Lord” (DV 21)

But if this is true, why did the Catholic Church keep people from reading the Bible for all those years?

The answer is, it never did any such thing. The official Church never forbade Bible reading or blocked accurate translations of the Scriptures being given to the People of God.  The important word here is “accurate.” Translation is always, to some degree, an act of interpretation. As such is can be particularly treacherous in leading people into error who think they are simply reading God’s inspired Word.

Such was the case with the English translation of John Wyclif, predecessor of the Protestant Reformation, whose anti-clericalism and denial of Christ’s full Eucharistic presence lurked underneath his “simple translation.” So yes, Church authorities objected to certain Bibles being circulated – because they were badly translated Bibles.

So how about when you have good translations? Popes Leo XIII and Pius XII, long before Vatican II, emphasized the importance of everyone being acquainted with the Word of God. And ultimately Dei Verbum 21 proclaims it loud and strong: “Access to sacred Scripture ought to be open wide to the Christian faithful.”

In the final chapter of this document, the Second Vatican Council encourages accurate and appropriate translations to be made into all vernacular languages. It even encourages ecumenical teams of translators to come up with versions that can be used by all Christians, assuming such translations are approved by Catholic Church authorities as accurate and containing no doctrinal errors. My favorite translation, by the way, is an ecumenical one – the original Revised Standard Version, done in the 1950’s, which was approved for liturgical use in the Catholic Church and is still available as the Ignatius Bible (San Francisco, Ignatius Press).

The Goal of All Bible Study

Dei Verbum quotes one of the greatest Bible Scholars of the Early Church, St. Jerome to emphasize the need of all Christians to become intimately familiar with Scripture: “Ignorance of Scripture is Ignorance of Christ.” Jerome studied the original biblical languages and sought to master all the technical tools available in his day to help him understand and expound the Bible’s meaning more effectively.

However, he and the other Fathers and Doctors never lost sight of the true purpose of Bible study. The Scriptures teach us much about the history of salvation and the moral law. Yet the ultimate point of God’s revelation is not classroom instruction. I’ve met many Catholics who have walked away disappointed from a bible study because it was heavy on history and theories of interpretation but stopped short of nourishing a living relationship with the Bible’s divine Author and applying the Word to everyday life. 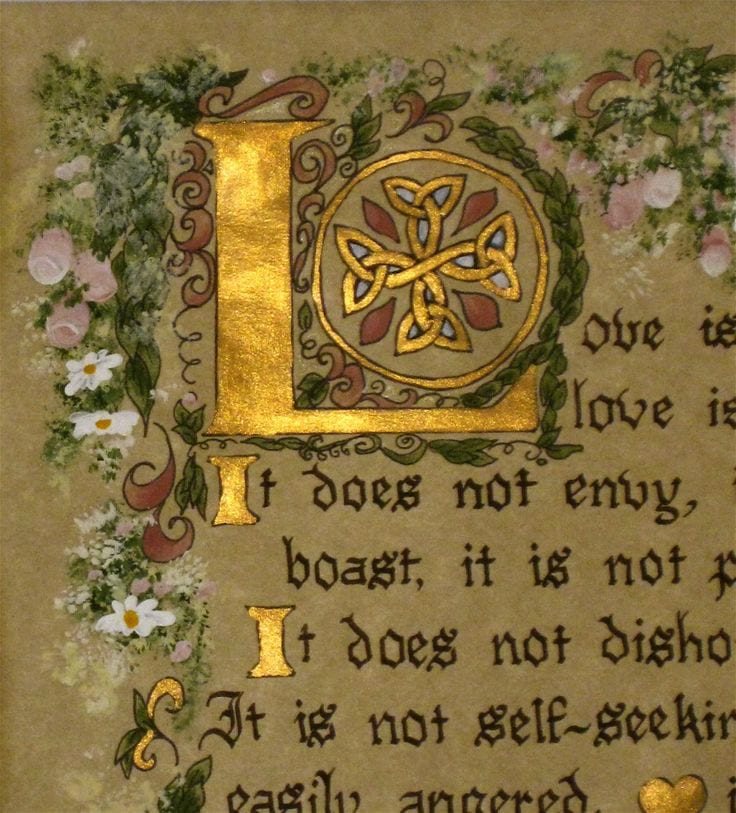 There is of course a tremendous amount of history, doctrine, and moral instruction in Scripture. But the deepest truth about Scripture is this –it is a privileged place where we encounter God and where He speaks a living, personal, life-changing word to us. “For in the sacred books, the Father who is in heaven meets His children with great love and speaks with them.” (DV 21).

Christianity is ultimately not a philosophy but a relationship. And Bible reading for the Christian must always be in the service of deepening this relationship.

I did not discover this until my teenage years. When I was a child, we had an old bible sitting around that was seldom opened. Curiosity prompted me to delve into it at about age 12. The only thing that interested me were the Old Testament stories touching upon fighting and sex. Everything else bored me to tears. My conclusion? The bible is dull and irrelevant.

One Sunday shortly before my 16th birthday, I went to Sunday Mass as normal but this time, the gospel somehow hit me between the eyes. It was about leaving everything behind and following Jesus. I was a hippie, involved in all sorts of social change movements of that time, and scornful of the bourgeois, bland middle-class Catholicism that I saw in my parish. This passage really surprised me because it was so challenging. I had never realized that following Jesus was supposed to be an adventure. So I ripped the passage out of the missalette and plastered it up on my bedroom wall.

Shortly thereafter, a young priest came to the parish right out of seminary and started a youth group. He passed out the Good News bible, a very easy to understand modern translation. I started reading it and this time it wasn’t ancient history. It was about now. It was about problems I was facing. Through it I heard God speaking to me about my own issues, answering my own, pressing questions, and I couldn’t get enough.

Later on I went to college and began formal study of Scripture, where I was eager to learn a lot of history, interpretation theory (hermeneutics) and even biblical Greek. But ultimately it was all in service of the relationship. The goal was, and still is, to understand the Bible better so that I might hear Him speaking more clearly and give myself more wholeheartedly to Him.

Perhaps the very central chapter of the entire Council, is not in Dei Verbum at all, but in Lumen Gentium or the Dogmatic Constitution on the Church. Chapter Five of that document makes clear the Universal Call to Holiness, that everyone, from every walk and state of life, is called to the heights of holiness, defined in terms of an intimate, transforming union with the three divine Persons.

God is love says 1 Jn 4:8 and holiness means, therefore, sharing in His very nature (2 Pet 1:4) –the perfection of love. The renewal of the Church, a stated reason for the convening of the Second Vatican Council, is ultimately about growing in charity. If Catholics are ever going to attract the unbelieving world to Christ, it means growing in charity. So where do we get the power to become holy, to love as he loved? The sacraments and the Word of God (DV 26).

So it is no accident that one of the four major documents of the Council is devoted to the liturgy and another, Dei Verbum, to the Word of God. And Dei Verbum, one of the last documents to be finished and published by the Council, says that all the advances in the study of Scripture over the last 150 years with the help of philology and archaeology – all this is good and to be received with thanksgiving.

But it reminds scholars and all Christians to keep in perspective the ultimate goal of reading the scripture. In the final analysis, the bible is given to us a place of dialogue, for us to meet with Him, to hear His voice, and respond to Him. We are called to be friends. He wants us to be increasing united with him in faith, hope and love so that we can be prepared for an eternity at his right hand. Encountering him through Scripture on a daily basis is one of the secrets to this transforming journey from glory to glory.

This post, part four of a series of four articles on Vatican II’s teaching on the Word of God, Dei Verbum, is based on a talk originally given at the Celebrate conference, Easter 2002, in Devon England.