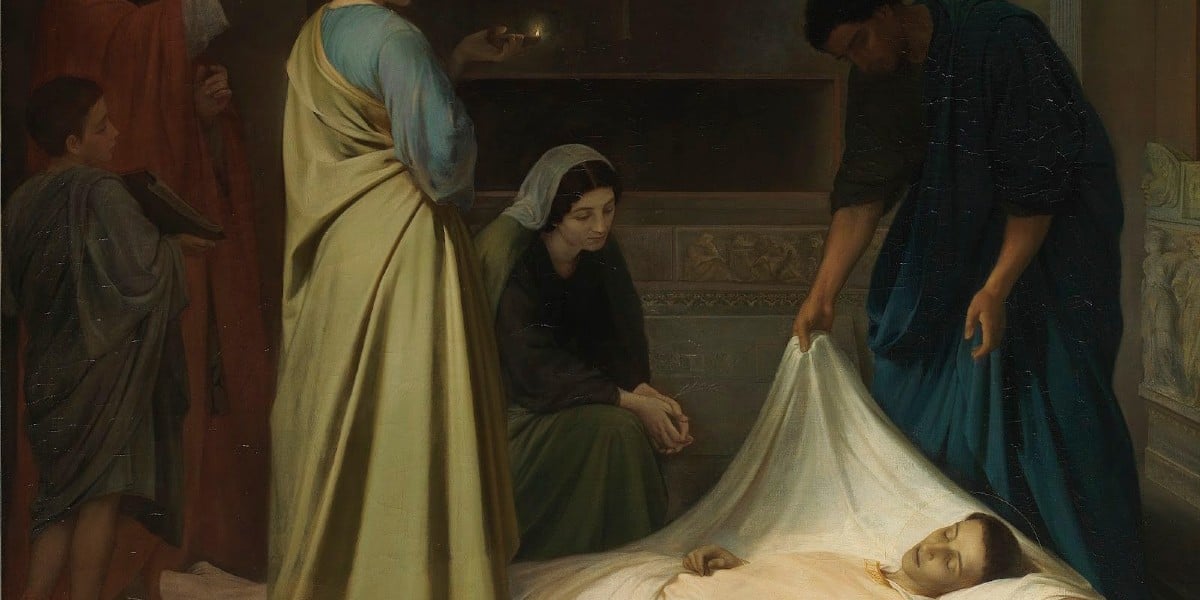 St. Lawrence (also rendered St. Laurence) was one of the seven deacons of the Church of Rome and was martyred under the Emperor Valerian on the 10th of August 258, four days after Pope Sixtus II and his companions. Little is known of the life of Saint Lawrence. What is clear is that he was immensely popular with the Christians of Rome. A basilica was built over St. Lawrence’s tomb in the field of Varano near the Via Tiburtina fifty years after his death, by the Emperor Constantine, and the anniversary of his martyrdom was kept in Rome as a solemn feast. In fact, by the sixth century, the Feast of Saint Lawrence was one of the most important feasts throughout much of western Christendom. His name occurs (with Sixtus’s) in the Roman Canon of the Mass (Eucharistic Prayer #1).  Here St. Augustine, in preaching about Lawrence, beautifully brings out the connection between the Eucharist or Lord’s supper, humility and martyrdom.

The Roman Church commends this day to us as the blessed Lawrence’s day of triumph, on which he trod down the world as it roared and raged against him; spurned it as it coaxed and wheedled him; and in each case, conquered the devil as he persecuted him.

For in that Church, you see, as you have regularly been told, he performed the office of deacon; it was there that he administered the sacred chalice of Christ’s blood; there that he shed his own blood for the name of Christ.

St. Lawrence & the Mystery of the Lord’s Supper

The blessed apostle John clearly explained the mystery of the Lord’s supper when he said Just as Christ laid down his life for us, so we too ought to lay down our lives for the brethren. St Lawrence understood this, my brethren, and he did it; and he undoubtedly prepared things similar to what he received at that table. He loved Christ in his life, he imitated him in his death.

And we too, brethren, if we truly love him, let us imitate him. After all, we shall not be able to give a better proof of love than by imitating his example; for Christ suffered for us, leaving us an example, so that we might follow in his footsteps.

In this sentence the apostle Peter appears to have seen that Christ suffered only for those who follow in his footsteps, and that Christ’s passion profits none but those who follow in his footsteps. The holy martyrs followed him, to the shedding of their blood, to the similarity of their sufferings. The martyrs followed, but they were not the only ones. It is not the case, I mean to say, that after they crossed, the bridge was cut; or that after they had drunk, the fountain dried up.

The garden of the Lord, brethren, includes – yes, it truly includes – includes not only the roses of martyrs but also the lilies of virgins, and the ivy of married people, and the violets of widows. There is absolutely no kind of human beings, my dearly beloved, who need to despair of their vocation; Christ suffered for all. It was very truly written about him: who wishes all men to be saved, and to come to the acknowledgement of the truth.

So let us understand how Christians ought to follow Christ, short of the shedding of blood, short of the danger of suffering death. The Apostle says, speaking of the Lord Christ, Who, though he was in the form of God, did not think it robbery to be equal to God.

What incomparable greatness! But he emptied himself, taking the form of a servant, and being made in the likeness of men, and found in condition as a man. What unequaled humility!

Christ humbled himself: you have something, Christian, to latch on to. Christ became obedient. Why do you behave proudly? After running the course of these humiliations and laying death low, Christ ascended into heaven: let us follow him there. Let us listen to the Apostle telling us, If you have risen with Christ, savor the things that are above is, seated at God’s right hand.

This post focuses on St. Lawrence, martyrdom, humility and the Lord’s Supper or Eucharist.  It is an excerpt from a sermon delivered by St. Augustine in about 400 AD on the occasion of the Feast of St. Lawrence (aka Laurence) (Sermo 304, 1-4, PL 38, 1395-1397).  The selection appears in the Roman Office of readings on August 10. The accompanying biblical reading of this office of St. Lawrence is taken from Acts 6:1-6 and 8:1-8, on the selection ministry of Stephen, Philip and the first deacons of the Jerusalem Church.

St. Augustine of Hippo
St. Augustine, born in Roman N. Africa to a devout Catholic mother and a pagan father, was a notoriously rebellious Catholic teenager who lived with his girlfriend, joined an exotic Eastern cult, and ran away from his mother. Augustine became a brilliant and renowned teacher of rhetoric and was appointed by the emperor to teach in Milan, Italy, at that time the administrative capital of the Western Roman Empire. While there, he happened to hear the preaching of the bishop of Milan, Ambrose, who baptized him at the Easter vigil of AD 386. St. Augustine ultimately renounced his secular career and put away his mistress.  He became first a monk, then a priest, then the bishop of Hippo, a small town on the N. African Coast. The voluminous writings of this Early Church Father span every conceivable topic in theology, morality, philosophy, and spirituality. St. Augustine of Hippo is commonly recognized as the greatest teacher in the Western Church between the New Testament and St. Thomas Aquinas and is one of the Doctors of the Church.  He died in AD 430.  (bio by Dr. Italy).  For more info on Augustine, see When the Church Was Young: Voices of the Early Fathers.