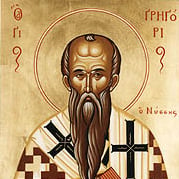 Gregory of Nyssa was the younger brother of St. Basil the Great and St. Macrina. Born around 330 AD, Gregory married and spent several years of his life in secular employment. He was rather lukewarm about spiritual things, but had a deeper conversion to Christ as an adult and eventually entered the monastery founded by his elder brother who consecrated him Bishop of Nyssa in 371 AD. Gregory fought tirelessly for the Trinitarian faith of Nicaea that was reaffirmed by the great Creed of the Council of Constantinople, which he attended. In the last few years of his life, he traveled a great deal since he was in great demand as a preacher, teacher, and spiritual writer. Gregory of Nyssa was a theologian of great depth and originality. He wrote famous treatises against trinitiarian heretics Eunomius and Apollinarius and instructed new Christians about the trinity, incarnation, redemption and sacraments in his Catechetical Orations. But his theological reflections far surpassed controversy and catechesis–indeed, St. Gregory of Nyssa provides us with the first systematic presentation of Christian doctrine since Origen over 150 years earlier. Gregory wrote many reflections and commentaries on Scripture, most notably his Life of Moses and homilies on the Lord’s Prayer, the Song of Songs, and the Beatitudes. Gregory's most important contribution was in the area of spirituality. While his brother gave eastern monasticism its structure and organization, Gregory provided its heart and mystical vision. For this reason he came to be known as “Father of Mysticism.” St. Gregory of Nyssa died around the year 395 AD and is revered as one of the greatest of the Eastern Church Fathers. He, his brother Basil and their friend St. Gregory of Nazianzen, are known as the Cappadocian Fathers, from the region in modern Turkey from which they came. His feast day is March 9th.  For more on Gregory of Nyssa, his brother Basil, and other Church Fathers, see When the Church Way Young: Voices of the Early Fathers by Marcellino D’Ambrosio.  (Biography by Dr. Italy)