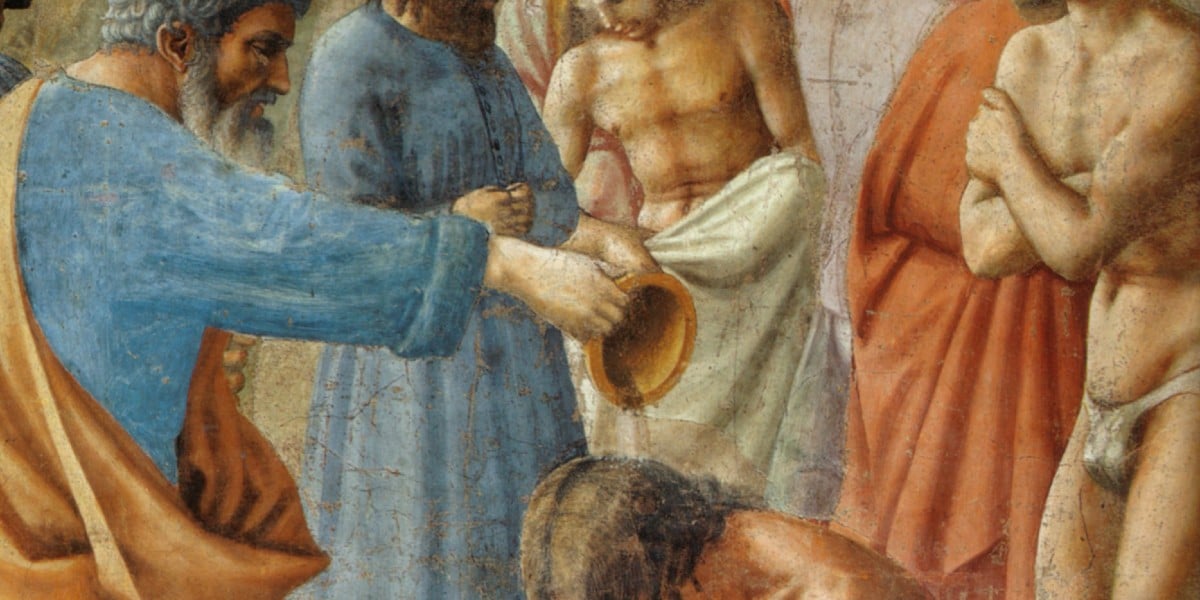 Baptism as Illumination in the Early Church – Justin

This reflection on baptism as illumination or enlightenment was written by St. Justin Martyr around 155AD in Rome and reflects the liturgical practices of not only the Church in that city, but most probably the practice of the Church in Ephesus and Palestine as well, where he had lived and worshiped prior to his move to Rome. It demonstrates that the early Church understood Jesus’ words to Nicodemus in John 3 as referring to the sacrament of baptism in the name of the triune God, Father, Son and Holy Spirit.

Through Christ we received new life and we consecrated ourselves to God. I will explain the way in which we did this. Those who believe what we teach is true and who give assurance of their ability to live according to that teaching are taught to ask God’s forgiveness for their sins by prayer and fasting and we pray and fast with them. We then lead them to a place where there is water and they are reborn in the same way as we were reborn; that is to say, they are washed in the water in the name of God, the Father and Lord of the whole universe, of our Savior Jesus Christ and of the Holy Spirit. This is done because Christ said: Unless you are born again you will not enter the kingdom of heaven, and it is impossible for anyone, having once been born, to re-enter his mother’s womb.

An explanation of how repentant sinners are to be freed from their sins is given through the prophet Isaiah in the words: Wash yourselves and be clean. Remove the evil from your souls; learn to do what is right. Be just to the orphan, vindicate the widow. Come, let us reason together, says the Lord. If your sins are like scarlet, I will make them white as wool; if they are like crimson, I will make them white as snow. But if you do not heed me, you shall be devoured by the sword. The mouth of the Lord has spoken.

The apostles taught us the reason for this ceremony of ours. Our first birth took place without our knowledge or consent because our parents came together, and we grew up in the midst of wickedness. So if we were not to remain children of necessity and ignorance, we needed a new birth of which we ourselves would be conscious, and which would be the result of our own free choice. We needed, too, to have our sins forgiven. This is why the name of God, the Father and Lord of the whole universe, is pronounced in the water over anyone who chooses to be born again and who has repented of his sins. The person who leads the candidate for baptism to the font calls upon God by this name alone, for God so far surpasses our powers of description that no one can really give a name to him. Anyone who dares to say that he can must be hopelessly insane.

This baptism is called “illumination” because of the mental enlightenment that is experienced by those who learn these things. The person receiving this enlightenment is also baptized in the name of Jesus Christ, who was crucified under Pontius Pilate, and in the name of the Holy Spirit, who through the prophets foretold everything concerning Jesus.

Banner/featured image The Baptism of the Neophytes by Masaccio. Public domain.

This excerpt from St. Justin Martyr’s First Apology (chapter 61) on baptism or “illumination” or enlightenment in the name of the Father, Son and Holy Spirit is used in the Office of Readings of the Roman Catholic Church on Wednesday of the Third week of Easter with the accompanying biblical reading of Revelation 9:1-12.

St. Justin Martyr was born around 120 AD in Palestine into a pagan Gentile family. He studied the wisdom of Plato, Aristotle, and other great Greek thinkers and became a professional philosopher. One day, while reading philosophy by the seashore, he was noticed by an old man who took the time to strike up a conversation about philosophy and religion. The elderly gentleman was a Christian and witnessed to Justin on how Jesus fulfilled all the prophecies in the Jewish holy books. As Justin investigated the matter, his realized that he had found the wisdom that he had been searching for all of his life. Justin then became a Christian teacher and lived for a while in Ephesus, after which he moved to Rome, the Imperial Capital. He wrote and spoke openly about Christ, addressing two “apologies” or defenses of the Christian faith to the emperor himself. Justin Martyr became one of the most influential teachers of the 2nd century. Though contemporary writers tell us that he wrote extensively on many topics, only his two apologies and his Dialogue with Trypo, the Jew, survive today.

A rival philosopher turned Justin in to the authorities for his Christian faith, and Justin was martyred around the year 165 AD. An eyewitness account of his interrogation and martyrdom at the hands of the Roman authorities has been preserved for us and is read each year in the Church’s office of Readings on June 1, St. Justin’s feast day.  (Bio by Dr. Italy)