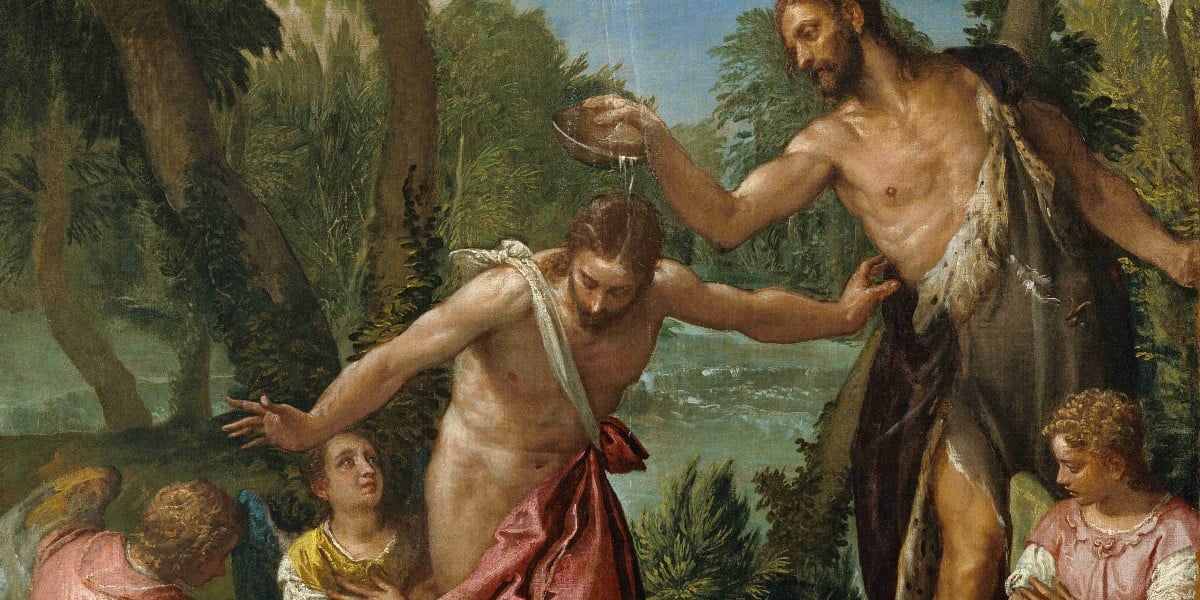 Baptism, the Ark, and the Dove – Ambrose

St. Ambrose explains how the sacrament of baptism was prefigured in the story of the flood and Noah’s Ark in the Book of Genesis.  The wood of the Ark, the flood waters and the dove which returns with the olive branch all prefigure different aspects of baptism.

What did you see in the baptistry? Water, certainly, but not water alone; you saw the deacons (like the Levites of old) exercising their ministry and the bishop (like the chief priest of old) asking questions and bestowing sanctification.

The Apostle Paul taught you to look not at what is visible but at what is invisible; for visible things will pass away but the invisible things are eternal. As you read elsewhere: Since the creation of the world, the invisible attributes of God, his eternal power and his divinity are understood through the things that he has done. The Lord himself says: If you do not believe in me, believe in my works. So here, at baptism, believe that the Godhead is present. Can you believe that God is at work and yet deny that he is present? How can any work happen unless the one who performs it is already there?

Consider how ancient this mystery is; for it is prefigured even in the origin of the world itself. In the very beginning, when God made the heaven and the earth, it is said: The Spirit moved upon the waters. He who was moving over the waters, was he not acting on them as well? You can recognize that he was working in that moment of creation, when you see how the prophet says: By the word of the Lord were the heavens made, and all their strength by the spirit of his mouth. There is as much support from the prophets for one thing as for the other. Moses says that the spirit of God was moving and David the psalmist testifies that he was working.

Here is another piece of evidence. By its own iniquities all flesh was corrupted. And God says: My Spirit shall not remain among men, because they are flesh. This goes to show that carnal impurity and the pollution of grave sin turn away the grace of the Spirit. Since that had happened, God sought to repair his disfigured creation. He sent the flood and commanded Noah, the just man, to go up into the ark. As the waters of the flood were receding Noah sent first a raven (which did not return) and then a dove, which came back with an olive branch, as we read in the scriptures. And now you see the water, you see the wood, you see the dove, and you still doubt the mystery?

The water is the water into which the flesh is dipped, to wash away all the sins of the flesh. And so is all sin buried.

The wood is the wood on which the Lord Jesus was fastened when he suffered for us.

The dove symbolizes the Holy Spirit’s taking on the form of a dove, as you have learnt from the New Testament: the Spirit who brings peace to your soul and calm to your troubled mind.

St. Ambrose was the bishop of Milan, Italy who baptized St. Augustine in the second half of the 4th century AD. This excerpt on how the features of the Noah story in Genesis – the wood of the Ark, the flood waters, and the dove all prefigure baptism is an excerpt from his treatise On the Mysteries (nn. 8-11: SC 25 bis, 158-160).  It is used in the Roman Office of Readings on Monday of the 15th week in ordinary time.

St. Ambrose of Milan’s life (Sant Ambroggio de Milano in Italian) is a particularly fascinating story. St. Ambrose was born around 339 in what is now Trier, Germany, the son of the Roman prefect of Gaul. Following his father’s footsteps, Ambrose embarked upon a career in law and politics and by 370 AD, he had become the Imperial governor of Northern Italy. When the episcopal see of Milan became vacant in 374, the people demanded that Saint Ambrose be made their bishop. The neighboring bishops and the Emperor convinced him to accept this call as the will of God, and so the catechumen Ambrose was baptized and ordained first deacon, then priest, then bishop, all in a single week! This politician-turned churchman was profoundly aware of his lack of preparation for this great responsibility and so set himself immediately to prayer and the study of Scripture. His deep spirituality and love of God’s Word married together with the oratorical skill acquired in law and politics made St. Ambrose one of the greatest preachers of the early church. St. Ambrose proved to be a fierce opponent of heresy, paganism, and hypocrisy. He battled to preserve the independence of the Church from the state and courageously excommunicated the powerful Catholic Emperor Theodosius I for a massacre of innocent civilians in Thessalonica. St. Ambrose also had a significant impact on sacred music through the composition of hymns and psalm tones that are known to this day as Ambrosian chant. Besides numerous sermons and treatises on the spiritual life, Saint Ambrose is responsible for two of the first great theological works written in Latin, De Sacramentis on the Sacraments and De Spiritu Sancto on the Holy Spirit. Around 385, an ambitious professor of public speaking named Augustine came to hear Saint Ambrose preach in order to study his technique, and in the process, was attracted to the Catholic faith. In 386 Augustine was baptized by St. Ambrose and went on to become bishop of Hippo in North Africa. Ambrose and his pupil, Augustine, together with St. Jerome and St. Gregory the Great, make up the four original Doctors of the Latin Church. Saint Ambrose, the great bishop of Milan, died on Holy Saturday (April 4) in the year 397 AD. His feastday in the Roman calendar is December 7, the day he was ordained bishop. From the Roman liturgy for the Feast of St. Ambrose: “Lord, you made Saint Ambrose an outstanding teacher of the Catholic faith and gave him the courage of an apostle. Raise up iin your Church more leaders after your own heart, to guide us with courage and wisdom. We ask this through our Lord Jesus Christ, your Son, who lives and reigns with you and the Holy Spirit, one God forever and ever. Amen.”  (bio by Dr. Italy)