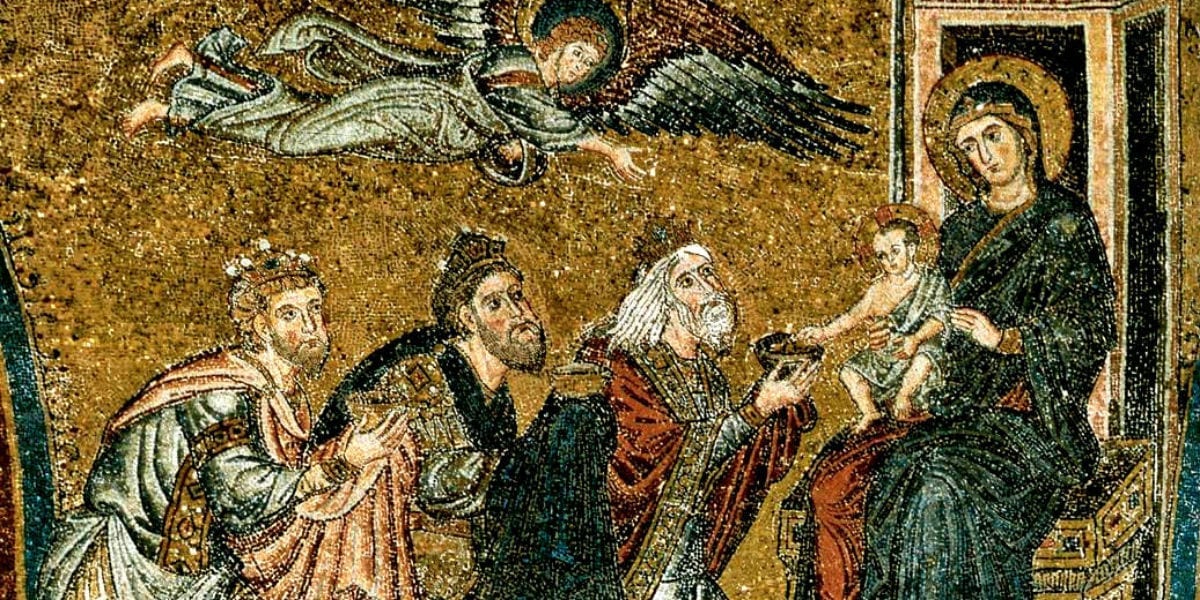 The Solemn feast of the Epiphany of the Lord traditionally occurs on January 6 following the twelve days of Christmas. Epiphany commemorates three scriptural events: the visit of the Magi to the stable of Bethlehem following the nativity of Jesus, Christ’s Baptism in the Jordan, and his first miracle at the wedding feast at Cana. This article focuses on the significance of the Magi or three wise men from the pagan east who follow the star in search of the King.

Up till now, all has been quite humble.  A donkey-ride to a dusty town south of Jerusalem.  Hotel rooms all booked up. Giving birth in a stable and laying the baby in an animal’s feed trough instead of a cozy cradle.

Into this scene of obscure poverty suddenly bursts an exotic entourage from a far off land. Dignitaries in dress uniform lavish the newborn with expensive gifts that seem out of place in the humble surroundings.

Epiphany – Appearance of the King

This event is so significant that it is accorded its own feast in the Roman liturgy, celebrated traditionally on January 6, following the twelve days of Christmas.  This solemn feast is called Epiphany, a word that means “manifestation” or “appearance.”

What seems to be no more than another crying baby of an indigent family for a brief moment “appears” for who He really is–the King of Kings and the Lord of Lords.   The gifts he is given, prophesied in Isaiah 60:6, tell the story: gold fit for a king, incense for the worship of God, and myrrh, bitter yet precious, for the hero who will lay down his life for his people.

There are several important things to note about these prestigious visitors.  They are Gentiles, not Jews.  From the very beginning of his human existence, then, Jesus is clearly not just the Jewish messiah who has come to deliver the people of Israel from foreign oppression.  No, he is the universal king, the ruler of all, who has come to tear down the hostile wall dividing Jew from Gentile, nation from nation.

If you’ve ever wondered what the word “Catholic” means, here we have it.  Derived from Greek words meaning “according to the whole,” it means that Christ did not come to establish some local religious sect for a select few, one “cult” among many.  No, the Church he founded is  “Catholic” or universal, spread over the whole world, welcoming the whole human race into one nation, one family, under one King.  As James Joyce once wrote, Catholic means “here comes everybody.”

Something else about these illustrious visitors.  As Gentiles, they are pagans.  In fact the term “Magi” is clearly linked to the word “magic.”  It was not in the Bible that they normally looked for wisdom (otherwise they would have known to go straight to Bethlehem).  But in reward for their ardent though perhaps misguided search for truth, God led them to Christ anyhow, in His great mercy.

Ever since the days of Balaam, God has shown us that pagans can be mysteriously drawn to him and used by him, at times even through their own imperfect traditions of wisdom.

If you go to the Sistine Chapel and study Michelangelo’s work, you can see evidence of this.  Lining the top of one wall of the chapel are famous paintings of many of the Old Testament prophets.  Opposite them are not New Testament apostles as one may expect.  But rather, a row of the Sybils, the prophetesses of the ancient world, in whose oracles there were discovered shadowy allusions to a future savior-king.

One of Michelangelo’s Sybils has her mouth agape with astonishment, her eyes fixed on the fresco of the risen Christ at the back of the chapel.  Indeed, the deepest desires of all peoples, the elements of truth found in all their religions and philosophies, are fulfilled in Christ.

Seeds of the Word, Seminal Truth

Does this mean that all religions are equal and that we should not impose our ideas upon others?

Not at all.  St. Justin said that there are “seeds of the Word” scattered throughout the world.  But seeds are meant to sprout, grow, and bear fruit.  Hearing the full gospel and partaking in all the means of grace are ordinarily needed to make that happen.

Epiphany means that all peoples of the world have a right to this “Catholic” fullness.  And it is our obligation to share it.  St. Pope Paul VI said it well: “others may be able to be saved without hearing the gospel, but can we be saved if we neglect to preach it?”

For More on the revelation of Jesus as King to the Magi representing Gentiles from all Nations, see the EPIPHANY LIBRARY of the Crossroads Initiative.