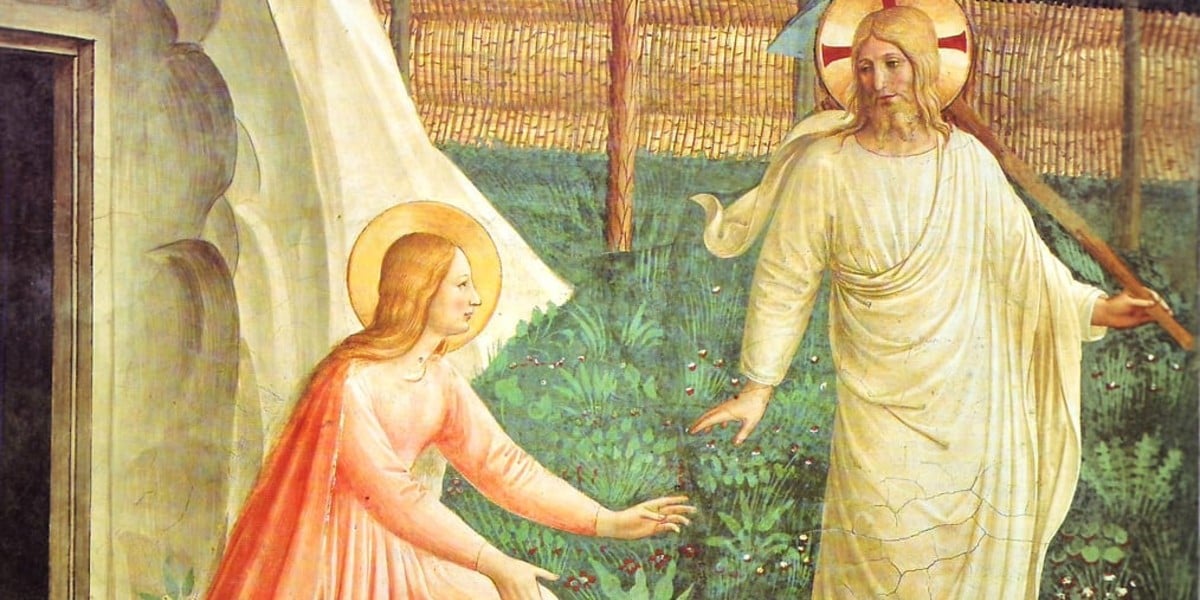 Mary Magdalene has been universally honored as a saint from the beginning.  All the gospels record her faithfulness to Christ even when the apostles wavered during and after the passion.  Eastern Christians call her “apostle to the apostles” since she carried the news of the resurrection from the tomb to the twelve disciples on Easter morning. The following reading is an excerpt from a homily preached by Pope Saint Gregory the Great around AD 600 on her encounter with the risen Christ.

When Mary Magdalene came to the tomb and did not find the Lord’s body, she thought it had been taken away and so informed the disciples. After they came and saw the tomb, they too believed what Mary had told them. The text then says: The disciples went back home, and it adds: but Mary wept and remained standing outside the tomb [John 20:11].

We should reflect on Mary’s attitude and the great love she felt for Christ; for though the disciples had left the tomb, she remained. She was still seeking the one she had not found, and while she sought she wept; burning with the fire of love, she longed for him who she thought had been taken away. And so it happened that the woman who stayed behind to seek Christ was the only one to see him. For perseverance is essential to any good deed, as the voice of truth tells us: Whoever perseveres to the end will be saved.

To Persevere with Desire

At first she sought but did not find, but when she persevered it happened that she found what she was looking for.

When our desires are not satisfied, they grow stronger, and becoming stronger they take hold of their object. Holy desires likewise grow with anticipation, and if they do not grow they are not really desires. Anyone who succeeds in attaining the truth has burned with such a great love. As David says: My soul has thirsted for the living God; when shall I come and appear before the face of God? And so also in the Song of Songs the Church says: I was wounded by love; and again: My soul is melted with love.

Woman, Whom do you Seek?

Woman, why are you weeping? Whom do you seek? She is asked why she is sorrowing so that her desire might be strengthened; for when she mentions whom she is seeking, her love is kindled all the more ardently.

Jesus says to her: Mary. Jesus is not recognized when he calls her “woman”; so he calls her by name, as though he were saying: Recognize me as I recognize you; for I do not know you as I know others; I know you as yourself. And so Mary, once addressed by name, recognizes who is speaking. She immediately calls him rabboni, that is to say, teacher, because the one whom she sought outwardly was the one who inwardly taught her to keep on searching.

Some writers in the Western theological tradition have identified Mary Magdalene with the female sinner in Luke 7:37-50 who anointed the Lord’s feet, and with Mary of Bethany, the sister of Lazarus in Luke 10:38-42. Others have identified these as three or two distinct individuals.  Here Gregory does not address the question of her life before Jesus, but focuses on her weeping at the tomb, seeking and meeting the Risen Christ.  This excerpt from a homily of St. Gregory the Great (Hom. 25, 1-2, 4-5: PL 76, 1189-1193) appears in the Roman Office of Readings for the Feast of St. Mary Magdalene on July 22.

For a 14 minute podcast by Dr. Italy on what we know about Mary Magdalene, Listen here.

For a Vatican letter explaining the importance of St. Mary Magdalene, read MARY MAGDALENE, APOSTLE TO THE APOSTLES.