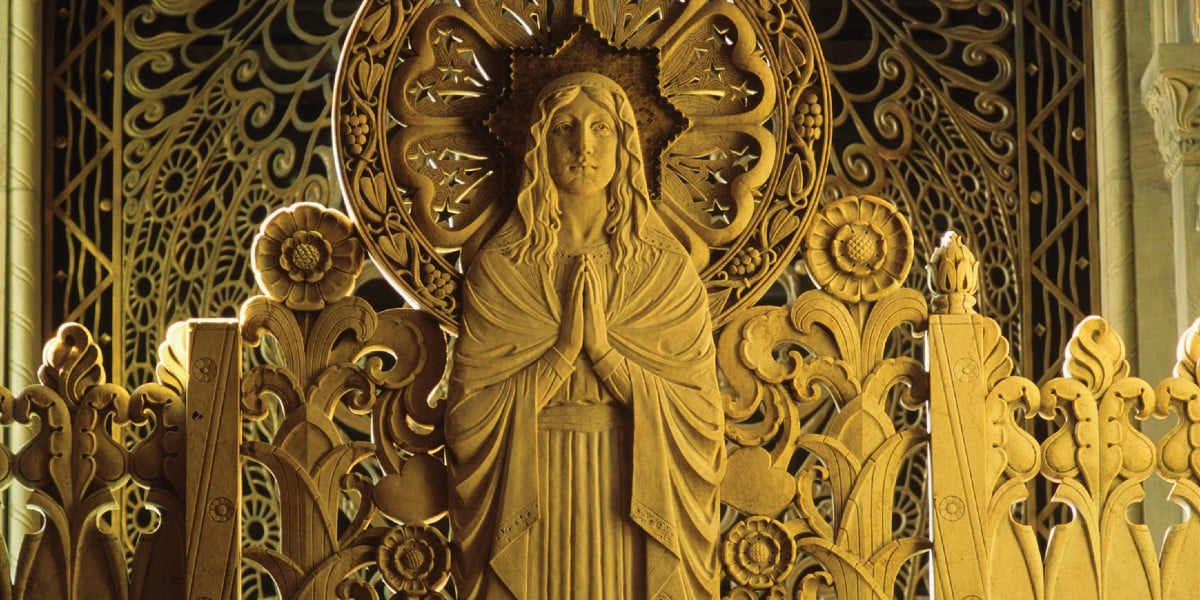 Cyril, patriarch of Alexandria, Egypt, presided over the 3rd great Ecumenical Council of the Church which met in 431 AD in Ephesus and which proclaimed Mary as the Theotokos (“God-bearer” or “Mother of God”).  Following this proclamation, many churches were dedicated to the Blessed Virgin, among them the Basilica of St. Mary Major, the first and greatest Church in Rome dedicated to the honor of the Mother of God, whose dedication is remembered each year on August 5.

I see here a joyful company of Christian men met together in ready response to the call of Mary, the holy and ever-virgin Mother of God. The great grief that weighed upon me is changed into joy by your presence, venerable Fathers. Now the beautiful saying of David the psalmist: How good and pleasant it is for brothers to live together in unity (Psalm 133)  has come true for us.

Therefore, holy and incomprehensible Trinity, we salute you at whose summons we have come together to this church of Mary, the Mother of God.

Mary, Mother of God, we salute you. Precious vessel, worthy of the whole world’s reverence, you are an ever-shining light, the crown of virginity, the symbol of orthodoxy, an indestructible temple, the place that held him whom no place can contain, mother and virgin. Because of you the holy gospels could say: Blessed is he who comes in the name of the Lord.

We salute you, for in your holy womb was confined him who is beyond all limitation. Because of you the holy Trinity is glorified and adored; the cross is called precious and is venerated throughout the world; the heavens exult; the angels and archangels make merry; demons are put to flight; the devil, that tempter, is thrust down from heaven; the fallen race of man is taken up on high; all creatures possessed by the madness of idolatry have attained knowledge of the truth; believers receive holy baptism; the oil of gladness is poured out; the Church is established throughout the world; pagans are brought to repentance.

What more is there to say? Because of you the light of the only-begotten Son of God has shone upon those who sat in darkness and in the shadow of death; prophets pronounced the word of God; the apostles preached salvation to the Gentiles; the dead are raised to life, and kings rule by the power of the holy Trinity.

Who can put Mary’s high honor into words? She is both mother and virgin. I am overwhelmed by the wonder of this miracle. Of course no one could be prevented from living in the house he had built for himself, yet who would invite mockery by asking his own servant to become his mother?

Behold then the joy of the whole universe. Let the union of God and man in the Son of the Virgin Mary fill us with awe and adoration. Let us fear and worship the undivided Trinity as we sing the praise of the ever-virgin Mary, the holy temple of God, and of God himself, her Son and spotless Bridegroom. To him be glory for ever and ever. Amen.

This reading is from a homily Cyril of Alexandria to the council of Ephesus (Hom 4: PG 77, 992. 995-996) in AD 431..  It appears in the Roman Cathholic Office of Readings for the Feast of the Dedication of the Basilica of St. Mary Major (Santa Maria Maggiore) on August 5.

Tradition has it that in August 352 AD, the Blessed Virgin appeared to Pope Liberius instructing him to build a major church in her honor on the Esquiline hill, on the site previously occupied by the Temple of the goddess Cybele.  The floor plan was outlined the next day by a miraculous August snowfall.  This major basilica, however, was not completed until the reign of Pope Sixtus III (432-440) most probably hastened by the proclamation in 431 by the Ecumenical Council of Ephesus that it is truly right and fitting to honor Mary under the title of “Theotokos” or “Mother of God.”  This Church, now one of the five patriarchical basilicas of Rome, was first called “Our Lady of the Snows” in honor of the miracle but came to be called “St. Mary Major” because it is the first and largest of the 26 churches of Rome dedicated in honor of the Virgin Mary.  It has also been known as Santa Maria del Presepe since it houses a relic of the holy Crib of the infant Jesus.

St. Cyril of Alexandria was born in AD 370, was ordained a priest, and lived a monastic life until he succeeded his uncle as patriarch archbishop of Alexandria, Egypt in 412. In 431 he presided over the Ecumenical Council of Ephesus which opposed the teaching of Nestorius and defined the inseparable unity of the divine and human natures of Christ, and thus the appropriateness of invoking the Blessed Virgin Mary under the title of “Theotokos” or Mother of God.  He died in 444 and is revered by Catholics, Eastern Orthodox, and Coptic churches as one of the greatest of the Fathers of the Church.  Roman Catholics also recognize him as a Doctor of the Church.  (bio by Dr. Italy)