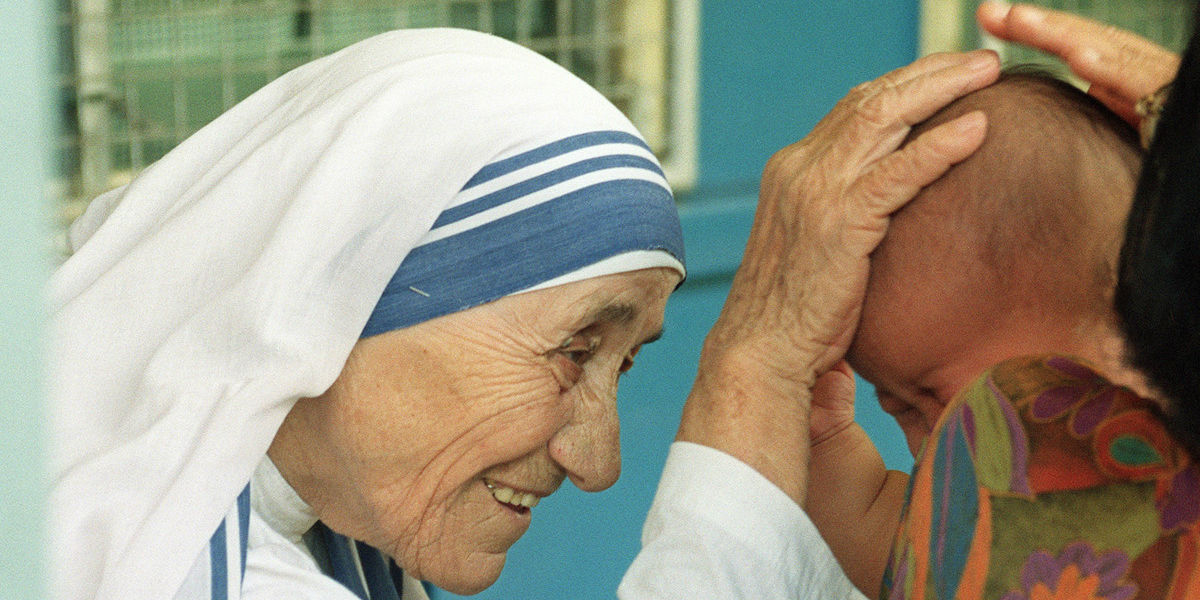 The meaning of mercy goes beyond justice & who is responsible. Mercy is love’s response to suffering.  The first in a series on how the eucharist is the sacrament of charity and should flow from and into the works of mercy.

Indeed, the Eucharist, and all the sacraments, are memorials of a dramatic act of mercy that occurred not in the serene majesty of the temple liturgy, but in history, amidst the hustle and bustle of everyday life.

Meaning of the Ultimate Work of Mercy

Let’s pause for a moment to recall the reason for the meaning of the Ultimate Work of Mercy. The first members of the human race had renounced their freedom and dignity as sons and daughters of God and had fallen into bondage to a tyrannical master. Suffering and death were the fruit of this slavery. The price to redeem themselves from this miserable situation was beyond their means. So in bondage they stayed, forging heavier chains for themselves with every passing generation.

Until, that is, the God of Justice manifested Himself as the Father of Mercy. Justice renders to each their due and calls each to assume responsibility for themselves. Mercy goes beyond the issue of who is responsible. Mercy is simply love’s response to suffering. So the Father of Mercy, to relieve our suffering, sent his Eternal Son to be made flesh by the power of the Holy Spirit. God the Son, by nature incapable of suffering, became vulnerable for us. He bound the strong man who had tyrannized the human race and paid the debt that the human race hadn’t been able to cover. His rescue mission succeeded at the cost of his life.

This is what the Mass commemorates and makes present again. The one who once gave himself in mercy to relieve our suffering continues to give himself to us, holding nothing back, in the sacrament of sacraments, the sacrament of divine mercy.

But why does he so give himself under the form of food? That we may become what we eat. That we may grow in holiness, which is to say, become more perfect in that divine love that we call charity. Mercy is just what charity does when it encounters suffering.

The Eucharist, then cannot exist in isolation from life. It is the liturgical commemoration of a Work of Mercy that is designed to issue in works of mercy. Thus mercy is essential to the life of every member of the Church until evil and suffering are no more. St James reminds us that Christianity that responds to suffering with no more than kind words and tender sentiments is neither true love nor even authentic faith: “If a brother or sister is ill-clad and in lack of daily food, and one of you says to them, “Go in peace, be warmed and filled,” without giving them the things needed for the body, what does it profit?” (James 2:14-17)

The work of mercy: things to remember

1) Mercy is for everyone. One of the greatest misconceptions of my early years as a Catholic was that Catholicism is a two-track system. Lay people just need to worry about keeping the precepts of the church and the Ten Commandments. The Sermon on the Mount and real holiness is the territory of those called to priesthood and religious life. Knowing that this misconception was pervasive, the Second Vatican Council affirmed in its Dogmatic Constitution on the Church that the call to true holiness is absolutely universal (Lumen Gentium Chap V). And holiness means love, and love means mercy. Therefore, works of mercy can’t just be relegated to those who belong to the social justice committee or the Missionaries of Charity. Everyone, without exception, is called to the work of mercy.

2) Mercy relieves suffering, and there are different kinds of suffering. I once heard a Catholic in France offer a striking petition in the prayer of the Faithful: “let us pray for all those suffering from the pain of not knowing the love of God.” The lack of bodily necessities certainly causes great distress. But so does lack of the things of the spirit. It is important to keep in mind that the Church enumerates not only corporal works of mercy but spiritual works of mercy as well, and that the latter actually have a certain preeminence. Perhaps not all are quite ready to instruct the ignorant or admonish sinners. But at least one of the spiritual works of mercy is something that virtually all of us can do, regardless of our location or state of health: interceding for the living and the dead. Indeed this is the work of mercy performed by the glorified saints in heaven.

3) Charity begins at Home. That Angel of Mercy, Blessed Mother Teresa of Calcutta, was often approached by people who were moved to want to share in her apostolate to the poorest of the poor. Her advice was often “go home and love your own family”. If we open our eyes there are people all around us who are lonely, sick, overworked, and troubled. They very much need our compassion and attention. This is where we must start. “If any one does not provide for his relatives, and especially for his own family, he has disowned the faith and is worse than an unbeliever.” (I Timothy 5:8).

4) Charity can’t end at Home The story of the Good Samaritan is striking for a number of reasons, not the least of which is the fact that the hero of the story has no natural bond with the victim. Jews and Samaritans actually had great antipathy for each other. So we can’t restrict our works of mercy to family, friends, and those who belong to our Church or political party. As Jesus tells us in the Sermon on the Mount, our works of mercy must extend even to our enemies.

5) Mercy is not always Convenient. There are times that works of mercy can be planned and fit in an orderly way into our schedule. But suffering and crisis are often unpredictable. And responding to them can often be very inconvenient. The Good Samaritan took a lot of time and went through no small expense to make sure the victim in the story was provided for. He was probably late for an appointment as a result.

6) Charity is not the same as Social Work. While people often refer to anything that benefits the disadvantaged as “charity,” the word actually means divine, supernatural love. It is action that springs from the love of God which has been poured into our hearts by the Holy Spirit (Romans 5:5) and must involve not just giving things but giving our ourselves. We must see God’s image and likeness in the person that benefits from our act and love that person for God’s sake. There is nothing wrong with making a year-end charitable gift, but if this is to be a true work of mercy, the motivation must be deeper than the wish for a tax write-off. For St. Francis and Mother Teresa, serving the poorest of the poor was serving Jesus Himself (Matthew 25:34ff). The work of mercy can and should be a deeply spiritual encounter.

7) Love is Never Condescending. The goal of the Ancient Enemy of mankind is to use suffering to rob those made in God’s image of their human dignity. Our goal in the work of mercy is always to restore that dignity and honor it. “Charity” that belittles the recipient is never true mercy. It may relieve some bodily suffering but only causes a deeper suffering of alienation and humiliation. The Divine Word emptied himself of glory and stood shoulder to shoulder with us. The one giving mercy cannot look down on the recipient of mercy. In fact the merciful humbly understand that they always receive as much or more as they give when they work to alleviate the suffering of the needy.

St. John Paul II wrote an Encyclical on God the Father near the beginning of his pontificate. With all the possible descriptions and titles for God used in Scripture and Tradition, what was he to title such an encyclical? The answer for him was simple: “Rich in Mercy” (Eph 2:4). God is preeminently the Father of Mercies and the God of all Consolation (2 Corinthians 1:3). The way we can be recognized as his authentic offspring is by living a lifestyle of mercy. It is interesting that in the only description of the last judgment in the Bible, salvation or damnation hangs not on how much religious art people have in their houses or how many Masses they’ve attended, but how they’ve treated the least of Jesus’ needy brothers and sisters.

The first in a series on the Eucharist, the type of love called charity, and the meaning of mercy.