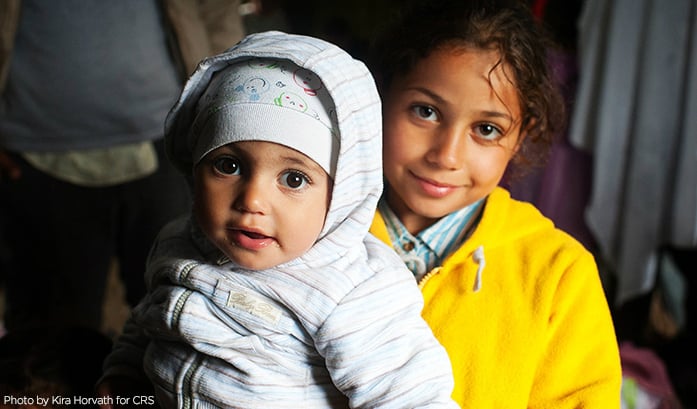 The traditional works of mercy show that while charity must begin at home, it cannot end there for Christians who wish to be faithful to the Scriptures and the teaching of the Church.  Our hearts and our works of mercy, must have a universal or “catholic” reach.

M ost religions in the ancient world were local, national cults.  The Egyptians worshiped Isis and Osiris.  Athens was named after the goddess Athena.  Ephesus was the center of the cult of Artemis.

But when the Church was born on Pentecost Sunday, it was comprised of people of every nation under heaven who each heard the good news in their own native tongue (Acts 2).  God’s plan had always been for humanity to be one family.  Sin had divided and scattered us (Genesis 12) but now, in a reverse of the Tower of Babel, the many tongues of the human race become a sign of unity, not alienation.  Christ had died for all and, in the Great Commission (Matthew 28:19), had sent his apostles to all.  And so his Church was not to be a sect for the chosen few, but for every “tribe and tongue and people and nation” (Revelation 7:9). That’s why at least from the beginning of the second century, the Church was called “Catholic,” from the Greek words meaning “according to or for the whole.”  The Catholic Church makes the “whole” treasury of Christ available to the “whole” world.

But don’t we have special responsibilities to our own family, community, and nation?  Absolutely!  We can’t save the world while our family and neighborhood go to pot.  In fact anyone who neglects to provide for the needs of the family “has denied the faith and is worse than an unbeliever.” (1 Timothy 5:8).  And according to the teaching of St. Thomas Aquinas and others, we have a special, patriotic duty towards our own nation from which we’ve received so much.

Yet truly Catholic charity cannot stop here.  The boundaries of our hearts must be stretched beyond our own nuclear families and national borders.  True, our hearts are not quite as infinite as the heart of God.  Our time, energy, and financial resources are limited.  But every “Catholic” individual and family who wishes to be worthy of the name must find some regular way to universalize the work of mercy, however modest this way may be.

Lent is a special time to examine and stretch our hearts even as we tighten our belts.  Curtailing some of our secular entertainment frees up time to learn about international needs and time to pray and even work to meet those needs.  Fasting from “extras” during this season can also free up funds for the needy of the world.

We don’t have to look far to become aware of glaring needs.  The news media and the internet bring the suffering of the world into our living rooms.  An economic downturn leaves millions without jobs.  The aftermath of dictatorship and war in Iraq, Afghanistan, and the Sudan requires intense and immediate attention.  AIDS is of epidemic proportions in Africa, killing not only adults but millions of innocent children.  China may be moving towards capitalism, but it is still far from democracy: There are an estimated 1 million Chinese in slave labor camps, many of them Catholics and Protestants “guilty” of worshiping in a Church unapproved by the state.  In some Muslim countries, the government looks the other way when Muslim mobs vandalize Churches and terrorize the Christian minority.

So what can we do about all this?

Pray: Intercession is one of the spiritual works of mercy.  The pattern for our personal and family prayer is set by the Church’s liturgy.  Notice that the prayer of the faithful is also called “The Universal Prayer” since it is supposed to bring before God Our Father the needs of the Church and the human family throughout the world.   Make it a daily practice to pray for the Holy Father’s intentions, which are truly universal, and also at least one particular need beyond the frontiers of your native land.

Help Persecuted Christians: Christians throughout the world are still being persecuted and even martyred for their faith on a daily basis.  Since the secular news media is usually oblivious to this, you have to work a bit to learn what is really going on.  The Voice of the Martyrs (http://www.persecution.com/) and the Jubilee Campaign (http://www.jubileecampaign.org/)

are two organizations that provide this information, collect funds for the families of those in prison, and organize publicity campaigns that can be very effective in obtaining release or improved treatment of Christian prisoners.  At times, these organizations even provide addresses of imprisoned Christians making it possible for us to send them letters of prayer and support.  Such letter writing campaigns are great projects for families and Catholic Schools. 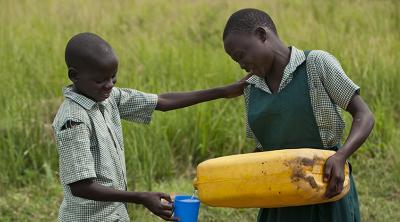 Feed the Poor: Some of the money we save from Lenten sacrifices can be sent to an organization, Catholic or secular, that is especially efficient in providing food, clothing, shelter, and employment opportunities to the poor of third world countries.  Some of my favorites are Catholic Relief Services (http://www.catholicrelief.org/) and Food for the Poor (http://www.foodforthepoor.org/).

Help Missionaries: Billions of people on this planet have never heard the gospel of our Lord Jesus Christ.  Many people falsely conclude that since Vatican II teaches that it is possible for those who don’t hear the gospel to be saved, that foreign missions are not longer necessary.  Vatican II, to the contrary, said that foreign mission work is more urgent today than ever. Following the Second Vatican Council, Pope Paul VI wrote a moving encyclical on Evangelization in the Modern World emphasizing once again the need to preach the Gospel to all nations, a spiritual work of mercy.  Foreign missionaries need our prayers and financial support.  A good place to start looking for a way to get support to the missions is http://www.onefamilyinmission.org/

Make it personal: When we began our family nearly 25 years ago, my wife and I  wanted to find a work of mercy that would create a more meaningful bond between our family and someone in need in the third world.  So we decided to sponsor a needy child from Chile through a Catholic Organization called Unbound (http://www.unbound.org/ ).  We receive regular letters and photos from this sponsored child, who is now in his twenties.  Our children can read his letters and write back.  Our modest monthly contribution and occasional Christmas and birthday gifts have much greater buying power in Chile, providing a Catholic education plus food and shelter for this young man.  It’s meant a lot to watch the great difference that we’ve been able to make in one person’s life.

Welcome Immigrants: In the Old Testament, the Lord God of Israel had a special bond with those in Israelite society who had no one to depend upon but Him– the widow, the orphan, and the stranger or immigrant.  The Israelite’s were once strangers in a strange land, far from homeland and family, and so they were commanded to take special care of immigrants in their midst.  There is always a tendency for successive generations to forget the immigrant status of their forebears and become indifferent or even hostile to new immigrant groups.  This happened in ancient Israel and happens in modern day America.  We can demonstrate Catholic, universal mercy right in our own communities by welcoming families moving to our area from other nations and cultures and remembering their needs as we go to the ballot box.

It’s true that many of us at times struggle to make ends meet.  But we have to keep in mind that in comparison with a majority of the world’s population, even the poor among us are rich.  The daily earnings of a minimum-wage worker in the USA are more than the average monthly income of a worker in Haiti.

From those to whom much will be given, much will be expected.  While none of us can single-handedly ease the entire world’s suffering, all of us can certainly do something.  Lent is a time to stop for a moment, and ask how, within the boundaries of our duties and budget, we can extend the reach of our love and mercy.

This is part two on a Lenten series of posts on the works of Mercy making clear that while charity must begin at home, it cannot end there for Christians who wish to be faithful to the Scriptures and the teaching of the Church.  To read part one of the series, click here.